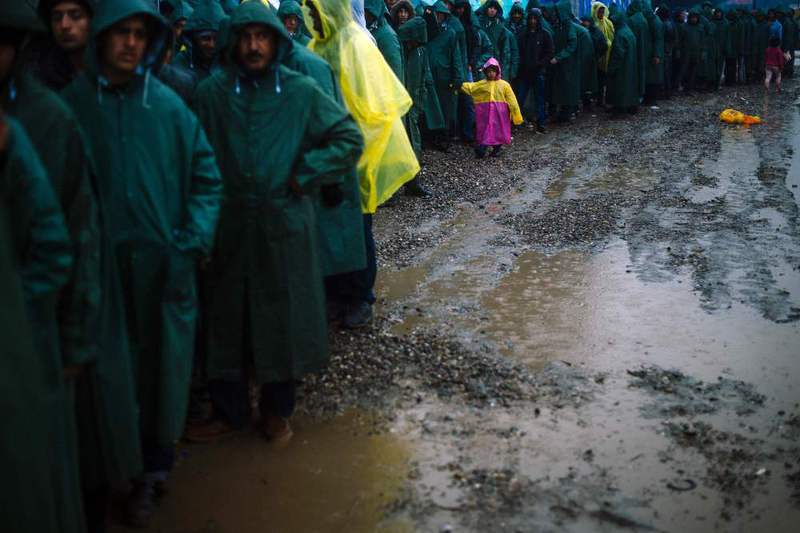 Refugees and migrants queue in the rain for soup in a makeshift camp at the Greek-Macedonian border, near the Greek village of Idomeni.
by Mehmet Barlas Mar 11, 2016 12:00 am

Despite being one of the main parties politically responsible for the Syrian refugee crisis, European representatives cannot help but be ironic

The outcomes stood diverted from the intentions... We are in the information era with the claims that the world has turned into a small village. It was assumed that even the problems of a small African village would find resonance in the entire world during the process of globalization. However, it turned out that globalization only means the circulation of capital irrespective of borders. People and their problems remained details. When continentalism is in question, for instance, when Europe's interests are put on the agenda, the tragedies experienced by people living on other continents can be ignored according to this notion of globalization.

Ostensibly, it is thought that civilians, including children, who are killed in Syria have to flee their hometowns and drown in Aegean waters, are Turkey's only problems. They argue that if these people achieve arriving in European countries, the social balances of those countries would be disrupted.

It also turned out that the EU's main concern was to prevent those fleeing from the massacres in Libya from arriving in Europe. For France, which made Muammar Gadhafi put up a tent in the garden of the Elysee Palace and then shelled Libya, they were all trivial details.

Can there be a more tangible example of carelessness in history than this? They act as if European imperialists and their contemporary ally, the U.S., were not responsible for the current crises in Syria and Iraq; the borders were drawn by the people living in the region; the oil in those countries contributed to the welfare and freedom of the people in the region and the bargains that led to Russia's intervention in Syria were made by Syrians.

The United Nations, which cannot raise its voice to the superpowers that defend the Syrian dictator Bashar Assad who murders his citizens with conventional weapons instead of chemical weapons, finds the EU's endeavors to deport Syrian refugees unlawful. William Spindler, a spokesman for the U.N. High Commissioner for Refugees (UNHCR), said that they were concerned about a regulation that will stipulate the mass deportation of refugees to Turkey.

Vincent Cochetel, the UNHCR's regional refugee coordinator for the refugee crisis in Europe, said: "The collective expulsion of foreigners is prohibited under the European Convention of Human Rights, so an agreement that would be tantamount to blanket return of any foreigners to a third country is not consistent with European law, is not consistent with international law," and said that the EU and Turkey need to come up with a different solution to the problem.

What a nice surprise that some notions such as human rights are eventually remembered.