The change in French protest tradition 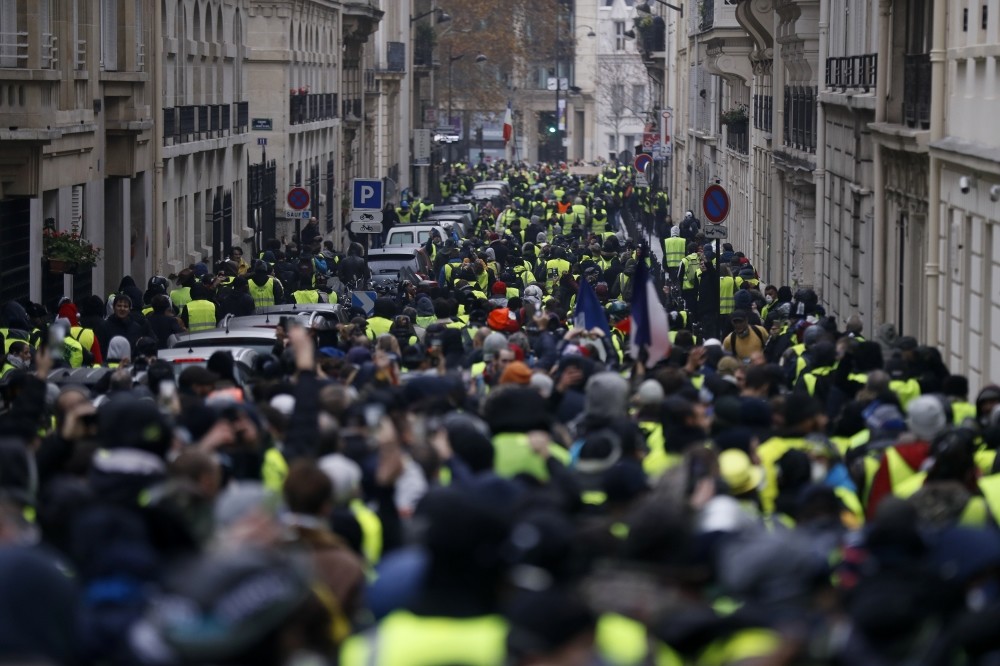 Protesters wearing iconic yellow vests during a rally near the Arc de Triomphe as riot police try to clear the area, as part of a demonstration over high fuel prices, the Champs Elysee, Paris, Dec.1.
by Mehmet Barlas Dec 07, 2018 12:00 am

Contrary to past protesters throughout French history, the French people are now in the streets not to defend their worldviews or ethical concerns, but to object to a single material policy of their government

The nature of the world is constantly changing. The past will always be the past, and we'll always learn something different from it. However, currently, the world is experiencing dramatic changes, particularly relative to people's thoughts and world views. When I first heard the reason behind the "yellow vest" protests in the French capital Paris, I was reminded of mass French protests in recent history. The rapid change in the world is apparently being felt in France, I said to myself, since the French protest tradition has always been unique, pioneering and based on something different than the motivation of today's yellow vests.

France, indeed, has been a European country where only ideological opposition provided the motivation for the masses to hit the streets. The Paris Commune of the 19th century or the May 1968 student uprising are prime examples of this. French people were accustomed to protests, demonstrations and organizing rallies based on their world views; sometimes on the famous Marxist doctrine or sometimes the youth nihilism voiced by Cohn Bendit.

However, French society is now in the streets not to defend their world views or ethical concerns, but to object to a single material policy of their present government under President Emmanuel Macron. The reaction of the people is a simple reflection of how the world has transformed.

Speaking to the French daily L'Humanite, sociologist Benoit Coquard said: "The yellow vests share the same world view and the same lifestyle. What is at the center of their lives is automobiles." Yes, automobiles. It is very strange when compared to the history of protests in the country.

As Coquard expressed, the reason why the yellow vests, who come from many different sectors and classes and many of whom are not even from the same cities, have protested is increased taxes on fuel oil. Contrary to past protesters in French history, they neither demand a reform for universities nor are they reacting against the political system in the country. All they stand against and complain about is paying too much for taxes and fuel.

As a result, the French government announced this week that it has decided to freeze the price increases and tax hikes for six months and surrendered to the yellow vests. However, the protests will not be recorded as successful but instead as a milestone in French protest history and tradition.