The most crucial social peace project in the history of Turkey 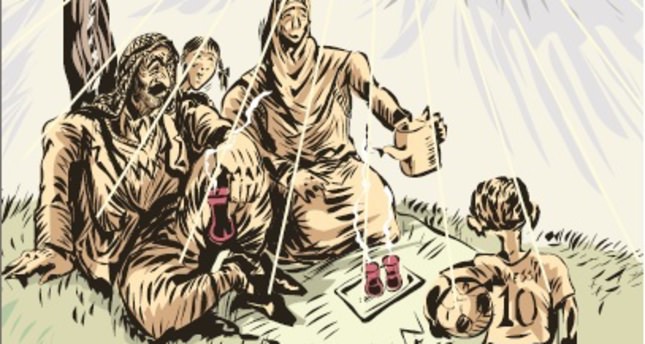 Despite all the sabotages and efforts by opposition parties to incite nationalists, the AK Party government did what it could to keep the reconciliation process on track

While writing for the most popular and radical opposition Kurdish newspaper, Gündem, if anyone had even dreamt of today's Turkey engaged in the peace process, I would have only laughed. I suppose that the staff and Kurdish readers of Gündem, of which tens of employees were murdered and bombed on the streets, would also follow the suit.

We are laughing today too. Not because we find this dream optimistic but because it has been substantially realized. Yes, after 30-years of civil conflict between the separatist PKK and the Turkish state, leading to nearly 50,000 deaths, Turkey is at peace thanks to the Reconciliation process declared to the public in December 2012.

The PKK, for the first time, decided to withdraw its militants from Turkish border regions and the Turkish army has not launched other operations targeting PKK militants. For the first time, not a single bullet has been fired in over a year in Turkey, which was the site of violent clashes and corresponding deaths day after day.

Kurdish issue from past to today

It wasn't any different during the Ottoman period. The Kurds also had trouble then. Yet the main rupture, however, resulted from political developments after the proclamation of the Republic in 1923. The founder of the Republic, Mustafa Kemal Atatürk cleared the Parliament of liberal, pious, leftist actors as well as the Kurds, who once helped him during the Independence War.

In 1925, under the pretext of an alleged rebellion by Sheikh Said, a Kurdish notable, which was exaggerated by the state, all the rights promised to the Kurds were shelved. These were followed by massacres of Kurds in Agrı and Tunceli, cities with large Kurdish populations. Until the Sept. 12, 1980 coup, the Kurdish language was banned and political activities in the Kurdish community were restricted.

In 1984, the PKK, founded by Abdullah Öcalan and his associates, launched the group's first armed attack. The violence between the PKK and the state reached its zenith in the 1992. Nearly 50,000 people died in fighting and urban terrorist attacks by the time their campaign came to an end. In 1990s, a time when the war dominated the country, the Turkish state led by destabilized coalition governments also implemented harsh policies. Kurdish political parties' offices were closed down and elected deputies were detained in the Parliament.

Inhumane practices against the Kurdish citizens were carried out and thousands of villages were evacuated. Illegal gangs within the army and PKK repentants committed numerous murders. Newspapers were shut down.

Chaos reached such a level that the eighth president, Turgut Özal, who just spoke of peace, was dubiously killed in 1993. Plenty of ranking politicians and generals fell victim to suspicious accidents in the same year. The number of unresolved murders during this period is estimated at 17,000.

Using power they had gained during the chaotic period, the army and its allies forced the Refah-Yol government, a portmanteau of the Turkish names of the two parties, the Welfare Party (RP) and the True Path Party (DYP) in coalition, to step down on Feb. 28, 1997. The three-party coalition - lead by Motherland Party's (ANAP) Mesut Yılmaz - then came to power as part of a social engineering project. In 1999, Öcalan was captured and taken to Turkey. But despite that, conflict raged until the November 2002 elections which saw the AK Party come to power alone. Having served time on Imralı Island, PKK leader Abdullah Öcalan was kept under the control of Turkey's deep state during the first years of the AK Party rule.

These same years saw coup plots devised against the Erdogan government, which would later be the subject of the Ergenekon and Sledgehammer (Balyoz) trials.

Öcalan made offers to officers and agents of the deep state, to withdraw PKK militants from Turkey within that period. This proposal was, however, declined by the officers, who arrested him, because the deep state felt a ceasefire would add to the power of the already strong AK Party, seen as a threat against laicism.

Öcalan's PKK was to be used as a trump against the political power. As a result, they were partially successful. PKK, which minimized the dose of attacks following the capture of Öcalan, restored its forces in 2004.

Erdogan who believed that a successful reconciliation process with the Kurds was a prerequisite to keep his widespread popularity permanent, he started to pursue his reform agenda. He initially removed the state of emergency that had been in place for years in eastern and southeastern regions of Turkey.

Democratic reforms were accelerated in accordance with EU criteria. In 2006, negotiations with the PKK kicked off through the National Intelligence Organization (MIT) in Oslo. Legal arrangements followed, one after the other. Turkey's state broadcaster, Turkish Radio and Television Corporation (TRT), began to broadcast in Kurdish, which was illegal until then.

New legal regulations allowing Kurdish-language institutes and private courses to open, culminated in permission the availability of the Kurdish language as an elective subject in state schools. Departments of Kurdish linguistics were opened in universities. The ban preventing propaganda in one's own language - in this case, in Kurdish - during elections, was abolished. Öcalan's prison conditions were improved. Investments in the region were encouraged.

In this period, radical constituents of the PKK linked with the Turkish deep state and some surrounding states made provocative attacks. Such that, network leader Öcalan even said that some of these actions "did not make sense" to him. During that same period, the bombing of 34 smuggler villagers, under the impression that they were PKK militants, was one of the most serious provocations against the process.

Eventually, in December 2012, Prime Minister Recep Tayyip Erdogan appeared in the spotlight and declared that the resolution process has begun in order to ink a peace agreement. Erdogan's will for peace resonated from Imralı. PKK leader Öcalan continues to support the reconciliation process in determination and manages to restrain the hawkish wing in his movement.

However these developments, a dream for the people of Turkey, are still under threat, because the elements that are against the reconciliation process are not limited to the military-civilian bureaucracy having nationalist and statist reflexes. Two of the four parties represented in the Grand National Assembly of Turkey are opposed to this process. One of them is the country's main opposition party, the Republican People's Party (CHP), which ruled under a oneparty regime from 1923 to 1946.

The other is the Nationalist Movement Party (MHP), which traces its roots back to a paramilitary organization. The votes of these two parties combined are around 38 percent. Also one must take into account opposition parties, Turkish mainstream media, certain leftist groups and intellectuals, encouraging PKK to fight.

The "Movement," led by a former imam, Fethullah Gülen, which stands out as an organization that acts independent of the political authority in the judicialsecurity bureaucracy is the latest member of this antipeace coalition.

The movement, based on a hierarchical system and who refer to themselves as the "service movement," with its network in bureaucracy and its media, has the potential to seriously damage the reconciliation process. They have used these powers from time to time. The movement leaked the content of negotiations in Oslo between the PKK and Turkish intelligence agents in 2006 to provoke the nationalists.
In 2009, they sabotaged the government's peace efforts, the "Initiative Process," using the same method.

Prosecutors affiliated with the movement, turned the investigation against PKK superstructure Kurdish Community Union (KCK), into a veritable witch hunt. Plastic handcuffs were used to arrest the elected mayors and their images were provocatively leaked to media. The judiciary directed its violence against individuals attending Kurdish language courses, children participating in street demonstrations rather than the elements of KCK, who are involved in crime. So much so that a minister of state complained, "If there are 8,000 terrorists in this country, let us abandon it!"

Nonetheless, Turkey is living happily and in peace for over a year now, since no lives have been lost due to the reconciliation process. The process is supported by some 20 million Kurds in addition to the majority of Turks. 40 percent of the votes in the region with a large Kurdish population raked by the PKK-linked [Peace and Democracy Party (BDP)] and Erdogan's party's 60 percent of votes is a clear indication of this support. As the state of ceasefire is prolonged, it is becoming increasingly impossible to equip people with weapons to turn back to fighting.

Of course, to sustain this great reconciliation project, support from the international community is vital for the Turkish government, the engineer of the reconciliation process.
Last Update: Oct 17, 2014 8:15 pm
RELATED TOPICS