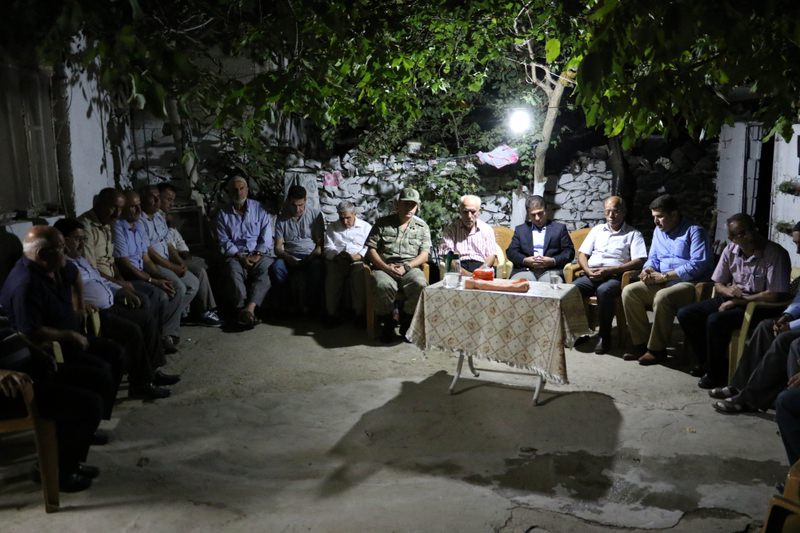 The sorrow in the family home of Mehmet Tuhal, martyred by a bomb planted and detorated by the PKK at the time he was passing by in his police car, still lingers.
by Melih Altınok Sep 17, 2015 12:00 am

When it comes to the PKK, the West has no hesitations when criticizing the Turkish state's self-defense measures against the attacks of the terrorist organization, forgetting their own actions against terror within their borders

The Turkish public has been struggling against the outrageous wave of terrorism kicked off by the outlawed PKK since the June 7 elections.

Dozens of security officers and civilians, including children, have been killed in PKK assaults so far.

Ankara is responding to the assaults by using its right of self-defense. The Turkish Air Force has been launching strikes on the organization's camps in northern Iraq. Independent sources report that the PKK has suffered heavy losses due to the operations.

The PKK has shifted its assaults from rural to urban areas upon the heavy blow inflicted on it in the mountains. The PKK sent its militants to predominantly Kurdish cities to activate what they prepared during the non-conflict period as part of the reconciliation process, which lasted two-and-a-half years.

One of those cities is Cizre, which is located close to the Iraqi border. Interconnecting some 150 houses in the city with tunnels, the organization kicked off a war with its 300 militants ruled by the mountain staff, which is about 30 people.

In order to prevent police intervention, construction equipment belonging to the municipality run by the Democratic Regions Party (DBP), the regional affiliate of the Peoples' Democratic Party (HDP), the legal wing of the PKK, dug ditches in streets in Cizre, which has population of 120,000. Booby traps were set on barricades and heavily armed militants started to perform identity checks on the streets there. In addition, the PKK disseminated images reflecting the gravity of the situation to many national and foreign press outlets for purposes of propaganda.Can you imagine what would happen if this type of situation was experienced not in Turkey, but in the U.S. or an EU country such as France, Germany or Britain? How do you think those countries would respond?

When it is considered that extraordinary measures were taken and even school trips were canceled as part of the measures in Paris following the Charlie Hebdo massacre, which resulted in 12 deaths, I do not have any difficulty in predicting the answer to this question.

You can also recall the one-week curfew declared along with the deployment of 5,000 national guardsmen following the unarmed street protests in Ferguson, Missouri in the U.S. or the martial rule measures taken by the federal state in Frankfurt after peaceful demonstrations in Germany.

The Turkish state also declared a one-week curfew in Cizre in the face of the continuous terrorist activities that cannot even be compared with the examples above in terms of severity.

However, this simple comparison is ignored in remarks coming from countries that take extraordinary measures even in incidents that cannot be compared with the prevalent terrorist assaults in Turkey. In the calls made by the U.S. and the EU, the PKK, which is also recognized as a terrorist organization by the aforementioned countries, is mentioned as an actor equal to the Turkish state and its legal and democratic government even in the face of the fact that Turkey has not caused any harm to a single civilian in its operations against the PKK, which has used civilians in Cizre as a shield.

So what is the source of this blatant double standard of the U.S. and EU regarding some universal values against terrorism, which are the common accumulation of humanity?

The left-wing's religion of romanticism and secularism

Many reasons can be listed for this classic Western behavior, which is highly debated and criticized in Turkey and the Middle East. The most common argument is that some European countries support terrorist organizations in Turkey for their regional interests.

This argument undoubtedly reflects the truth to a certain extent, since it is also supported by some intelligence data. However, it would be unfair to generalize this suggestion for all Western countries.

Although known for showing the utmost concern for terror, Western countries apply a double standard when it comes to the tragic terrorist assaults in a country that is so close to them and also a candidate for EU membership, and the cause of this double standard is still open to debate. It is also essential to distinguish the reflexes of the Western public from the approaches of their countries.

For instance, even the PKK, which has killed numerous civilians along with security forces in its fight with the Turkish state for more than 30 years, is defined as a guarantee of secularity in the region due to its struggle against the extremist Islamic State of Iraq and al-Sham (ISIS).

The West will sooner or later see the heavy cost of justifying groups that terrorize outside of their borders due to their ideological concerns. Hopefully it will not be too late before they see it. This double standard has a potential to turn even the most moderate into radical anti-West proponents. The gravity of the situation might be grasped better when the millions of Middle Easterners living in Europe are considered.
Last Update: Sep 17, 2015 2:14 am
RELATED TOPICS