The keystone of Turkey's disaster domino 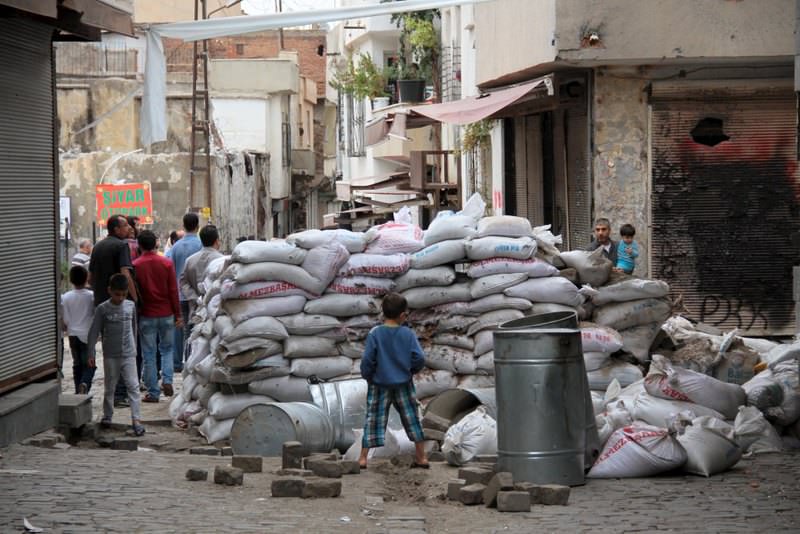 Turkish security forces try to remove the barricades constructed by PKK militants in the streets of Sur district in the predominantly Kurdish southeastern Diyarbaku0131r province
by Melih Altınok
Oct 15, 2015 12:00 am

The timing of the terrorist attacks in Turkey, when the country stands as the sole democracy in the region capable of holding free elections and has no civil war within its borders, is ironic

Turkey witnessed the bloodiest terrorist attack in the history of the Republic over the weekend. Two suicide bombers went into a crowd that had gathered for a peace rally in Ankara and killed 97 people.

Police and intelligence units are still investigating the incident. The Islamic State of Iraq and al-Sham (ISIS) is currently considered one of the prime suspects in the attack. As well as acts of terrorism in Turkey, ISIS took 49 Turkish staff members hostage at the Turkish Consulate in Mosul last year. It also declared President Recep Tayyip Erdoğan to be an enemy a short while ago and announced that Turkey is a target.

Apart from material evidence, another reason why ISIS has come under the spotlight is its competition with the PKK and its legal wing, the Peoples' Democratic Party (HDP), operating in Turkey. This is because the HDP was the most important representative at the peace rally that was attacked over the weekend. Furthermore, ISIS, which operates in neighboring Syria and Iraq, has been struggling with the People's Protection Units (YPG), the armed faction of the PKK's Syrian Democratic Union Party (PYD) branch, over territorial dominance in the Syrian Kurdish town of Kobani. ISIS is also considered to be responsible for the terrorist attack that claimed the lives of 34 people in Şanlıurfa's predominantly Kurdish populated town of Suruç on July 20 earlier this year.

Those who are aware of the balances in the Middle East know very well that ideological barriers between terrorist organizations are eliminated for pragmatic reasons most of the time. Therefore, intelligence agencies that lead and finance terrorist organizations should not be overlooked while interpreting the acts of such structures that act jointly from time to time despite appearing to be enemies. From this point of view, if ISIS, the PKK or any other terrorist organization is found to be responsible for the Ankara attack, this does not mean clarification for the massacre. In this regard, the suicide bombing could be defined as a foreign-affected internal attack.

Turkey is the only democracy that is capable of holding elections in its region. It has consolidated this capability further with a reform process over the past 13 years. The liquidation of military tutelage as well as moves, including material and moral energy to end the 30-year civil war between the PKK and the state has further cleared the way for Turkey. After ensuring social peace and improving the economy, Turkey has also started to use initiative in regional politics. The Syrian civil war broke out at such a time, and Turkey adopted a very clear stance against the dictatorial Damascus regime.

At the current stage, the Syrian crisis is a global problem that concerns Europe as well as Russia, the U.S., Iran and other countries in the region. At such a juncture, there are attempts to prevent Turkey from getting involved in this process in line with its interests. Previously, 52 people died in the Reyhanlı bombing in which the Syrian intelligence agency al-Muhabarat used the Revolutionary People's Liberation Party-Front (DHKP-C) as a proxy. Today, the Ankara attack and similar terrorist incidents are attempts to force Turkey to withdraw into its shell and the common goal is to prevent the Nov. 1 snap general elections. This is also the reason why PKK terror, which has killed dozens of people since the June 7 elections, has gotten out of hand to the extent it has.

A very critical process lies ahead of Turkey until Nov. 1. There are risks of new terrorist attacks that will make Turkey ungovernable and hamper the elections. Certainly, if this malevolent objective is achieved, the dark picture that will emerge will not only affect Turkey. Stability and security in Turkey, which is a prospective EU member and sets a model in the region with its democracy, will create a domino effect in the entirety of Europe. If the potential for terror and the refugee crisis caused by Syria's civil war, which cannot be compared with Turkey's dynamics in terms of importance, are taken into consideration, the extent of the danger will be better understood. It would be a great mistake if the U.S., EU and our other allies interpret Turkey's position in the region with the paradigms of the previous century. This is because the fire in the Middle East might swallow everyone.
Last Update: Oct 15, 2015 2:05 am