Turkey's four priorities for the next four years 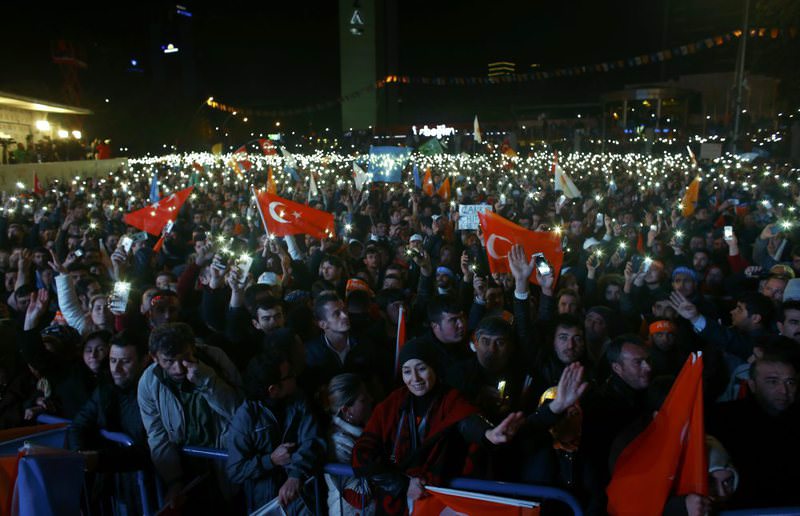 AK Party supporters waving party and national flags as they celebrate their party's victory in the Nov. 1 elections in front the AK Party headquarters in Istanbul.
by Melih Altınok Nov 12, 2015 12:00 am

Winning the Nov. 1elections, the AK Party now has to focus on four main topics in Turkish politics: A new and civil constitution, the Kurdish question, finding new ways to continue economic growth and EU accession

After securing a stable government in the Nov. 1 parliamentary elections, Turkey will go through major reforms over the next four years. The steps that Turkey will take in this period can be categorized under four main headings.

As a party that emerged victorious in the elections by receiving a high vote share of 49.5 percent, the first and most important topic on the Justice and Development Party's (AK Party) agenda is to establish a new, civil constitution. This is because the 1982 Constitution, which was drafted after the Sept. 12, 1980 coup fails to meet the requirements of Turkish democracy today. Although a new constitution was mentioned in the election campaign promises of all parties, no major step has been taken on the matter so far. The new government to be established could not achieve a quorum of 367 deputies in Parliament – the figure that is stipulated for a party to amend the Constitution on its own. This being the case, the new government will try to build a consensus with opposition parties in Parliament in an attempt to reach 330 deputies – the number required to hold a referendum on a new constitution. In addition to removing obstacles to basic rights and liberties, a civilian constitution will help Turkey switch to a new government model. Indeed, Turkey, which has a distorted parliamentary system, has so far been doomed to unstable governments due to a lack of traditional political consensus, which has paved the way for economic crises and political tension. Therefore, the majority of the public thinks that a presidential system will help Turkey overcome such troubles and wants presidential system alternatives to be discussed.

Opposition parties, however, fiercely object to this change, thinking that it is a high possibility that President Recep Tayyip Erdoğan, who was elected with 52 percent of the vote in August 2014, will be re-elected president if Turkey switches from a parliamentary system to a presidential regime. However, government system reform on which a referendum will be held seems inevitable.

The second topic on which Turkey is expected to dwell in the new period is the Kurdish question, which is one of the major pillars of social peace. The reconciliation process, which was initiated in 2013 and which nearly brought the 30-year war to an end, was broken by the separatist PKK after the June 7 elections. However, the Turkish state is resolute in maintaining its right to self-defense against PKK terror. At the same time, the government also maintains its will to reinstate the Kurds' political rights. The liquidation of the PKK's armed elements will enable other political representatives from the Kurdish community to be active, as well as its legal wing, the Peoples' Democratic Party (HDP). Thus, the number of interlocutors in the reconciliation process will increase and it will be made difficult for a single will to have a monopoly on the process and sabotage it.

The strength of the AK Party, which has come in first in four parliamentary and three local elections during its 13 years in power, is based on the support it garners from economically disadvantaged groups on the periphery. During its rule, the AK Party has focused on social and economic projects for these social factions and managed to boost the rate of the middle class from 20 percent to 40 percent. It vowed in its election campaigns to take this success further in terms of overcoming income injustice. Apart from structural reforms such as a low interest rate policy aiming to boost employment, the AK Party announced that immediate economic solutions, which include a hike in the minimum wage, would come one after another over the next few months.

Another step to be taken by the new government will concern integration into the contemporary world and the EU. This perspective, which is the leading motive for Turkey's reform process of the past decade, has been neglected for the past few years. The positive statements that the EU has made about opening new chapters in Turkey's membership bid have contributed to the government's eagerness about the matter. Turkey does not have major troubles concerning economic criteria stipulated by the EU and, in the upcoming period, it aims to focus on improvements in freedoms of the press and expression, which were referred to in the latest EU progress report.

Turkey will enjoy an election-free period of four years in which it can focus its efforts on improvements in the aforementioned topics. If these are realized, Turkey can appear on the global stage as a democratic and developed superpower on the centenary of the founding of the Republic. Certainly, this positive picture will not only serve Turkey's interests, it will also help the EU the U.S. have a stronger ally in this turbulent region and Middle Eastern countries, which are looking for a way out, will have a strong role model.
Last Update: Nov 12, 2015 2:14 am
RELATED TOPICS