What is happening in the basement of that building in Cizre? 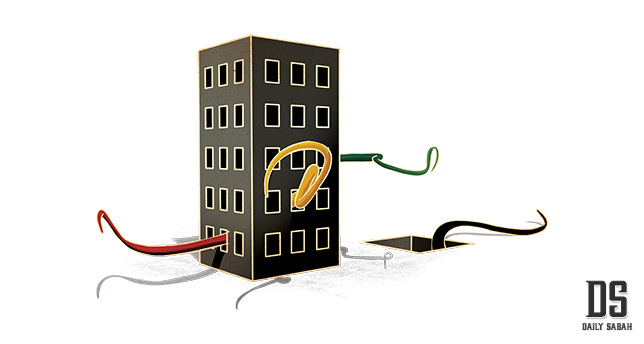 The PKK, like every other international terror organization, has constructed a building complex in Cizre with underground tunnels interconnecting the buildings, to make it easier to open fire against security forces

The outlawed PKK, the Turkish branch of the Kurdish Communities Union (KCK) that acts with the aim of a unified Kurdistan in the Middle East, mobilized once again last June.

The PKK declared autonomy in some predominantly Kurdish-populated cities in the southeast after its legal wing, the Peoples' Democratic Party (HDP), received 13 percent of the vote in the June 7 elections. Certainly, the cyclical success of the PKK's Iraqi and Syrian affiliates played a part in this move. The organization thought that the international prestige it gained thanks to its struggle with DAESH for territorial dominance would help it. Previously, however, it was acting in de facto unison with DAESH in the region. In accordance with this objective, the PKK has killed dozens of security officers so far. In addition to the civilians and children who have become the victims of the PKK, many mosques, churches, schools and even hospitals have been damaged in PKK attacks. However, this was not an instantaneous decision made by the KCK leadership, as the organization made major preparations for a conflict in the peaceful environment that accompanied the two-and-a-half year reconciliation process that was initiated in December 2012.

The PKK took advantage of the security forces' avoidance of carrying out operations against it for the sake of the peace talks, and accumulated ammunition and weapons in cities. However, it failed to be welcomed by Kurds, whom it claims to defend. This is why it could take action in just in 20 cities in three provinces where millions of Kurds live. The Turkish state ensured the security of Diyarbakır's Sur district where the PKK dug ditches in streets and planted improvised explosive devices everywhere. Kurds living in these provinces fled the clashes and migrated to safer cities. All the latest opinion polls indicate that the vote for the HDP has dropped by half due to the PKK's terrorist acts.

The epicenter of this uprising, which the PKK prepared for during peace talks with the state, was located in Şırnak province's town of Cizre on the Turkish-Iraqi border. Security forces continue operations against the terrorists who settled in the homes of Cizre residents by seizing them and control entrances and exits in the province. With the objective of managing the PKK's uprising, a complex of buildings connected to each other with tunnels has been established in the province that is seeing similar moves as in the 1990s. Eyewitnesses say that no one is allowed to approach the building.

The reason for the HDP's numerous press statements in recent days is that the operations carried out by security forces have succeeded and they finally reached this terrorist base. This is because the circle has become tighter and the senior terrorists in this base, where terrorist acts are masterminded to claim hundreds of lives, have been pushed against the wall. They claim that there are not terrorists, but injured civilians in this PKK base and that the HDP's politicians want ambulances to be deployed around the building to deal with the casualties. However, PKK terrorists in the building are not as moderate as their legal representatives. Recently, one of the terrorists who was backed into a corner in the building got through to a television program by phone, saying that their insurgency would continue and they would not "give in to the ambulances."

I cannot help but wonder why an injured civilian would resist ambulances that are deployed to take him to a hospital. There is a single answer to this question: Terrorists in that building do not want to go through a judicial process after they are treated in hospitals. They want a special formula to be found for this problem so that they can flee the country without standing trial.

Against all odds, the Turkish state deployed healthcare teams to the building as the crisis persisted. However, sharpshooters opened fire on ambulances from inside and outside of the building. Some health workers were injured and some security officers died in the attacks.

Some HDP- and PKK-dominated media outlets continue manipulative efforts despite what is happening in the glare of publicity in Turkey. The only solution to the crisis is for the HDP, which has ongoing dialogue with the PKK, to ask them to surrender. In this case, every media outlet would monitor the transfer of the terrorists inside the building to hospitals in a healthy way, followed by fair trials. A different situation is not possible as any democratic rule of law on earth cannot allow senior terrorists who caused the deaths of dozens of civilians and security officers to flee the country easily as if nothing happened.

Those who have difficulty thinking without making a comparison should see what the French government would have done if the perpetrators of the Paris attacks had gotten stuck in a building in the city. I think the state of emergency that is still in place in the country after the attacks would give them an idea.
Last Update: Feb 04, 2016 1:49 am
RELATED TOPICS