Are you with us or terror? 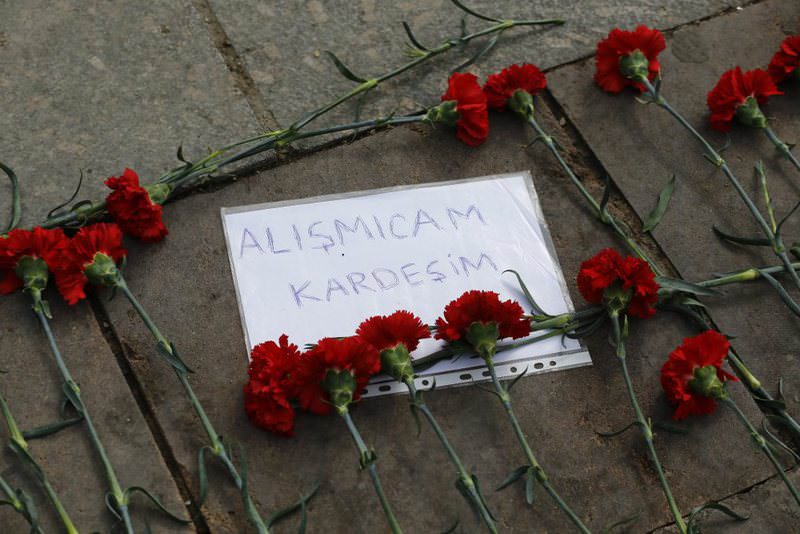 People left carnations and a paper that says: ,I am not going to get used to it,, near the scene of the explosion that killed 35 civilians in Ankara.
by Melih Altınok Mar 17, 2016 12:00 am

In addition to the Marxist-Leninist doctrine behind the PKK and its Syrian affiliate PYD, the organic connection between Russia, Iran and these terrorist organizations is anathema to the U.S.'s possible approach

Turkey was ravaged by another terror attack over the weekend. Some militants of the outlawed Kurdistan Workers' Party (PKK) killed 37 people with a car bomb in Ankara. Dozens were injured in the attack.

Published following the attack, Cemil Bayık, one of the senior figures of the PKK, in an interview told that they target President Recep Tayyip Erdoğan and the ruling Justice and Development Party (AK Party). This announcement serves as a confession since the PKK explicitly revealed with this statement that it is not actually a national liberation and resistance movement as it has claimed for years. The PKK and its legal representative in Parliament, namely the Peoples' Democratic Party (HDP), clearly demonstrate that they regard targeting civilians as part of a legitimate method of politics.

In this case, nothing would be more natural than Turkey's resorting to its right of self-defense. The majority of the public also favors and demands such. In addition, while lifting the parliamentary immunity of HDP deputies who systematically praise violence is on the agenda, how could the PKK put its cards on the table so openly? How could the organization announce just after the deadly Ankara attack that they use suicide bombers to intervene in Turkey's governance? In whom or what do they trust? This is related to the balances of power in the Middle East rather than the political positions in Turkey.

The PKK highly trusts the impression it created after its Syrian affiliate, the Democratic Union Party's (PYD) People's Protection Units (YPG), fought off DAESH in Kobani.

It must be remembered that during the conflict in Kobani, the West, particularly the U.S., often employed propaganda suggesting that the PKK and PYD act as secular freedom fighters fighting against radical Islam in the region. The PKK movement now believes that the U.S. and the West, which even provided weapons aid to the PYD, will not break this profound cooperation "only for the lives of several hundred civilians."

Are they wrong? Is it supposed to be that way? Turkey and the U.S. have been close allies for more than 50 years. It is unthinkable for the U.S., which is a world power that leads the global anti-terror fight, to choose a suspected and unreliable organization over a reliable ally that houses their military bases. This becomes even more impossible considering that the organization has a Marxist-Leninist stance and justifies its existence with anti-U.S. and anti-imperialist rhetoric. Considering that the PKK and PYD are directly dependent on Iran and Russia, which manipulate the terror in the region as an instrument of international relations, it is impossible to ignore that the situation brings structural damage to the U.S.'s national interests.

Even though the costs are heavy, Turkey, which lost around 50,000 citizens in 30 years due to PKK terror, will definitely overcome this problem, alone, again. However, no one can expect the Turkish public, which has a strong collective memory, to forget which countries in such hard times sided with organizations like the PKK, which confessed that it regards massacring civilians as a political instrument.

It is high time for the U.S. and the West to make a final decision. Will they side with their ally, which lost hundreds of citizens as a result of the terrorist attacks of the PKK, PYD and DAESH in the last six months, or some terrorist organizations whose actions and targets are ambiguous? The Turkish public expects a definite answer from the nations we see as allies and friends.