Demirtaş wants an interval for war 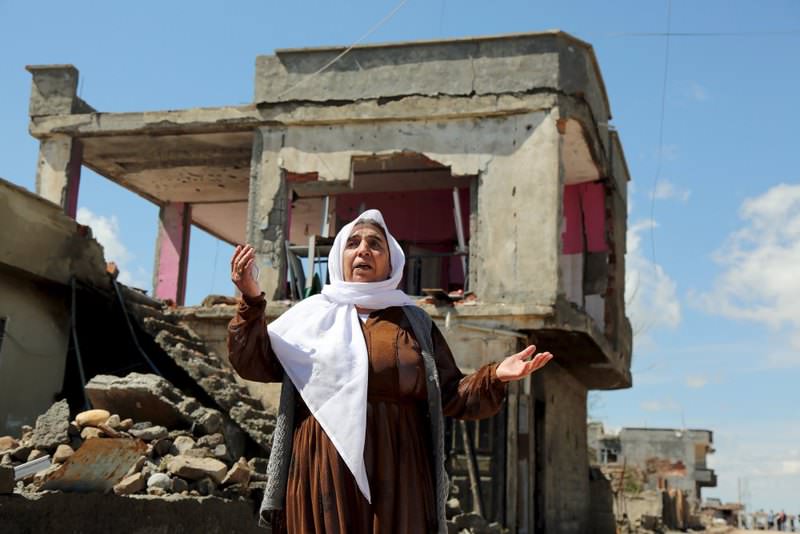 A Kurdish woman reacting as she stands in front of her house, which was damaged by PKK militants, in the southeastern town of Idil, Turkey.
by Melih Altınok Apr 14, 2016 12:00 am

The reason of Demirtaş's sudden reverse is obviously so that the HDP can gain time for the PKK, which has recently lost much power, to recover enough strength to continue its fight against the Turkish state

The outlawed PKK, which has been engaging in violent demonstrations in Turkey, is recognized as a terrorist organization by the U.S. and many European countries since it is not possible to justify PKK actions that have claimed around 50,000 lives so far, including civilians.

Germany is among the countries that list the PKK as a terrorist group. One of the oldest allies of Turkey in Europe, Germany lately hosted a figure in charge of the PKK's legal wing.

Selahattin Demirtaş, one of the co-chairs of the Peoples' Democratic Party (HDP), which represents the PKK in Parliament, spoke at the Hertie School of Governance in Berlin. In his speech, upon a question regarding why the reconciliation process in Turkey that started in 2013 was interrupted, Demirtaş said: "In retrospect, one of the leading subjects we regret is the institutionalization and transparency of the negotiations. We should have attached more importance to those aspects."

Most of the German journalists and citizens listening to Demirtaş are naturally not very familiar with the developments and context in Turkey. Consequently, they listen to Demirtaş's remarks under the influence of his title as the legal representative of an illegal organization who strives to include the organization in the political realm. Probably, they think about the examples of the Irish Republican Army (IRA) and Sinn Fein in Britain and Basque Country and Freedom (ETA) and Batasuna in Spain while evaluating Demirtaş's statement.

As a matter of fact, they are not totally wrong in thinking that way. Normally, the legal wings of illegal organizations around the world try to persuade the organization to refrain from violence as much as possible. But unfortunately, the situation in Turkey is radically different from the collective memory of Germans, which has been shaped by universal experiences.

For instance, the HDP concealed imprisoned PKK leader Abdullah Öcalan's call to the organization on March 21, 2015, to the public since Öcalan called on the PKK to organize a conference that would focus on laying down arms. Moreover, Demirtaş looked down on this chance for peace created by the leader, asserting that the demand to disarm the PKK was not "realistic."

Of course, this is not the only tangible instance demonstrating the HDP's attitude. Let me mention a few more. What about the HDP deputies apprehended while carrying weapons to PKK militants in their private cars? Of course, we should not forget that some HDP members appeared at the funerals of the PKK suicide bombers who committed the massacres targeting civilians in Ankara. They issued statements that systematically praised violence during the funeral ceremonies. So why is Demirtaş, who tried to press the government in front of the nationalist public against the reconciliation process with provocative activities during the two-and-a-half years, now reciting praise for the negotiation process? Isn't he the one who called on his proponents to take to the streets and revolt on Oct. 7-8, 2014, while the peace process was operating without any problem? This uprising claimed the lives of some 50 civilians.

Who do you think is the one who left the reconciliation table by assuming that the votes the HDP received in the June 7 elections were cast as support for the PKK's armed attacks?

Yes, the reason for Demirtaş's sudden reverse is obvious. The PKK, which the HDP co-chair relies on even more than the HDP electorate, was undermined a great deal by the latest operations. The organization does not have any power left other than relying on suicide bombers. In addition, all surveys show that the HDP's vote share has declined by almost half due to the PKK terror attacks. The Turkish public is highly cognizant of this discrepancy. Demirtaş and his party have fallen from grace in Turkey. For this reason, the HDP administration is seeking ways to impress the international public.

They aim to gain a little time for the PKK to recover enough strength to start fighting again. Just as they submitted control of the cities they govern to the PKK to enable the organization to get ready for today's clashes when the state ceased its operations during the reconciliation process.

However, they cannot fool anyone now since the bodies of civilians, soldiers and police officers killed in the PKK's "revolutionary people's war," which began by relying on the vote share the HDP received on June 7, have just been buried.
RELATED TOPICS