Either Turkey or the PKK-YPG 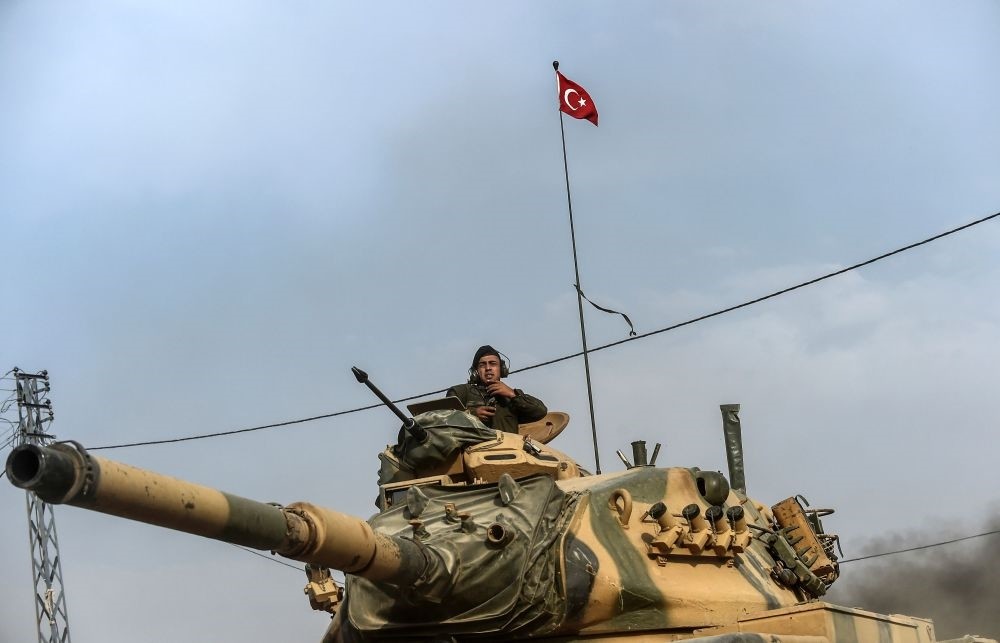 A Turkish soldier gesturing as Turkish Army tanks drive to Syrian Turkish border town of Jarablus as part of Operation Euphrates Shield, which was launched in August 2016 against regional terrorist groups such as Daesh, PKK and PYD, Aug. 25, 2016.
by Melih Altınok Feb 16, 2017 12:00 am

If presidents Trump and Putin want their countries to gain a strong position in the Middle East, they should both lend an ear to Turkey's advice on counterterrorism against the radical groups in the region

The years-long unipolar position occupied the U.S., the victor of the Cold War, was considerably shaken during former President Barack Obama's era.

Having seen the emergence of new pressure centers such as Russia, China, Turkey and Britain, which will soon leave the EU, new President Donald Trump is trying to extremely courageous. He thinks this process can be balanced in favor of his country only through the re-regulation of bilateral relations.

Therefore, he announced that he would radically revise all agreements, including economic relations, established by the Obama administration.

The new president, who questioned his country's role in NATO even during the election period, burned bridges with Iran as soon as he took office. Obama had created a de facto situation with Iran.

Then, he began evaluating Turkey's theses about Syria as a serious alternative on the table. The most important thesis of Turkey, which shoulders the burden of the Syrian civil war on behalf of almost the entire world, is to establish a safe zone.

Trump has a positive attitude on the same matter, which came to the agenda during the phone conversation he made with President Tayyip Erdoğan last week.

However, the U.S. has not explained its attitude on areas apart from those that Turkey has purified of Daesh as part of Operation Euphrates Shield and that are held by the People's Protection Units (YPG), the Syrian wing of the PKK terror organization.

It is said Trump is waiting for the results of the April 16 constitutional referendum to clarify his policy on Syria. The leadership of the terror organization indicated that if the constitutional amendment were approved in the referendum, Erdoğan, who proposes a safe zone in Syria, would gain strength, which will put a spoke in the PKK and YPG's wheel.

Well, how does Russian President Vladimir Putin approach Turkey's proposal of a safe zone in Syria, while it is known that his warming relations with Ankara has troubled Washington for a while?

Like the U.S., Moscow is leaning toward a no-fly safe zone in Syria. However, Moscow does not want to lose its PKK-Democratic Union Party (PYD) card to Trump following Obama. Therefore, it argues that not only the area that Turkey has purified of Daesh, but also all of northern Syria must be a safe zone. This means an international shield for the PKK-YPG, which has created terror bases that it names cantons in northern Syria.

It seems Putin plans to have a more advantageous position against the U.S. in Syria by providing actual support to the PKK-PYD. He must more seriously evaluate that he might have pushed Turkey, with which he has recently reconciled, toward Trump.

This is because for Turkey, the PKK-PYD, which is responsible for the death of more than 50,000 people, is not a detail that can be compromised at the table for the sake of imperial objectives, but the most serious threat against its existential struggle.

Both Putin and Trump, who are striving to turn the power balances in the Middle East in their own favor, have to acknowledge this sensitivity of the Turkish state and public.

Otherwise, while trying to have a share of the new world order, they will lose all that they have in the Middle East, including cooperation with Turkey.
RELATED TOPICS