Neither peace nor war possible in Mideast without Turkey 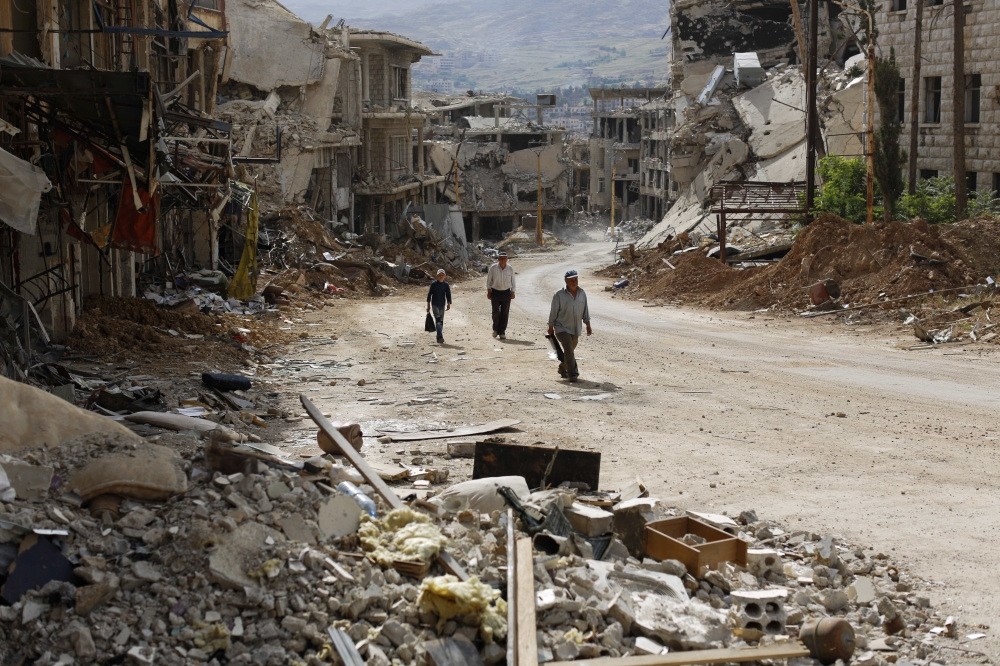 Syrians walk among damaged buildings on a street filled with debri at the mountain resort town of Zabadani in the Damascus countryside, Syria, May 18.
by Melih Altınok Jun 01, 2017 12:00 am

The fate of the Middle East is depending on Turkey's next moves, whether the U.S., Russia or the terrorist groups accept it or not

U.S. President Donald Trump, who said that it was not the Iraqis that knocked down the World Trade Center, but the Saudis, during his election campaign last February, paid his first foreign visit to Saudi Arabia. Even if Trump did not make a splash with Muslims, he pleased the Saudis and won a $380 billion arms agreement.

Following Saudi Arabia, he visited Israel where he wore a yarmulke, put his face on the Western Wall and made harsh statements about Iran, a mortal enemy of Zionism.

Where could the U.S. president go after the centers of Islam and Judaism? Yes, although Trump could not hold his wife, Melania's hand, he managed to catch the Pope's arm in the Vatican.

So, why will all these weapons be sold, the defense modernizations agreed on and the messages given through religions, and even sects, be used in the medium and short term?

Certainly, they will be used for war and boosting arms sales once again.

Robert Fisk, a senior Middle East correspondent of The Independent, summarizes this scenario that can be seen by all rational people who are interested in the Middle East as follows, "The aim, however, is simple: to prepare the Sunni Muslims of the Middle East for war against Shiite Muslims. With help from Israel, of course."

In short, this is a win-win situation. Saudi Arabia is happy. Israel is happy. So, the Jewish lobby in the U.S. is happy. And of course, Trump is the happiest of them all.

However, the political players in the Middle East are not predictable elements as the Pentagon thinks. Ironically, these actors left the region to the hands of the Pentagon not to the Trump administration or the American state

For instance, Iran, which Trump intimidated amid the cheers of Saudi Arabia and Israel, claims that Riyadh supports Daesh, the latest enemy of the U.S.

Also, the outlawed PKK and its Syrian branch, the People's Protection Units (YPG), which are both secular terrorist structures that the U.S. supports against Daesh, is the henchman of the Damascus regime that Washington is trying to overthrow.

Moreover, the U.S. president's plan to garner Saudi support in the Palestine question, which Israel considers an internal matter, is nothing short of a dream. This is because Saudi Arabia is less trustworthy than Egypt in the eyes of many Palestinians.

Coupled with Trump's unpredictability, all of this leads to a more complicated deadlock.

We will all see how much noise Trump will be able to make against Iran, another ogre that he listed after North Korea. What is certain, though, is that, although Washington decides on a de facto state of peace that is based on open wars, low-intensity conflicts and a balance of terror, it needs Turkey not matter what the circumstances are.

In fact, Ankara is the only basis between the strength and resistance points of a pair of scales that Trump is trying to balance in his own way. Moreover, it is the only Sunni Muslim power in the region that has the potential to establish relations with Iran, just like in the uranium barter agreement in 2011. Also, it is the sole laic state which the Palestinian administration will follow without any doubt about Israel.

The U.S. must stop acting with the romance of Saudi Arabia's Lawrence and look for ways to boost cooperation with Ankara, its 50-year-old ally, as soon as possible.