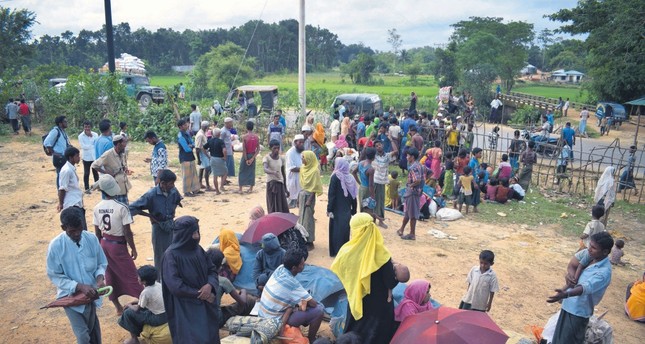 People fleeing as a result of the renewal of violence against the Muslim Rohingya minority of Myanmar. Bangladesh is blocking the entry of desperate Rohingya refugees.

What is happening to the Rohingyas is exactly what the U.N. calls genocide, but it has so far only called for moderation from both sides

More than 3,000 people have been killed so far. While you are reading this post, a few more people will probably be dying.

Yes, I am talking about the poor Rohingyas in Myanmar, formerly known as Burma. There is no war.

More than one million people living in the Rakhine state in the northwest of the country live under the threat of massacre by their own state.

The only reason is that they are Muslims.

The images of civilian massacres that have been circulating in news wires are terrible.

Muslims are a minority in the mainly Buddhist-populated country, and the Myanmar government is at the helm of pro-coup radical Buddhists.

The government does not recognize some people living in the country as citizens because of a citizenship law issued in 1982. The government claims that Rohingyas are Bangladeshis who settled in the region during the British colonial period in the 1800s. Therefore, it does not accept them as citizens and does not give them the right to have identity cards or acquire property.

Thousands of Rohingyas, who are tired of repression, injustice and exile politics since the country was founded, have escaped and migrated to nearby countries. It is known that 500,000 Rohingya refugees in Bangladesh, 350,000 in Pakistan and 150,000 in Malaysia live in hard conditions.

The number of Rohingyas that the Myanmar government forced to migrate to surrounding countries in the past three years alone is around 140,000.

What is happening is exactly the U.N.'s definition of genocide.

However, those who were discussing genocides as the main agenda of politics years ago are silent now.

The U.N., EU and eventually the U.S., which said that it is watching Rakhine, have confined themselves to call on parties for sobriety.

You civil Rohingyas who are subjected to atrocity, who are raped and who are dragged to marshlands by regular army units, please act more moderately while dying.

Stand on your sobriety as the U.N., EU, U.S. and other countries in the region with their heads in the sand suggest.

Who knows, perhaps the mass murderer Myanmar government will show mercy then.

I am ashamed in the name of humanity.