NATO and EU's eastern border now safer despite US 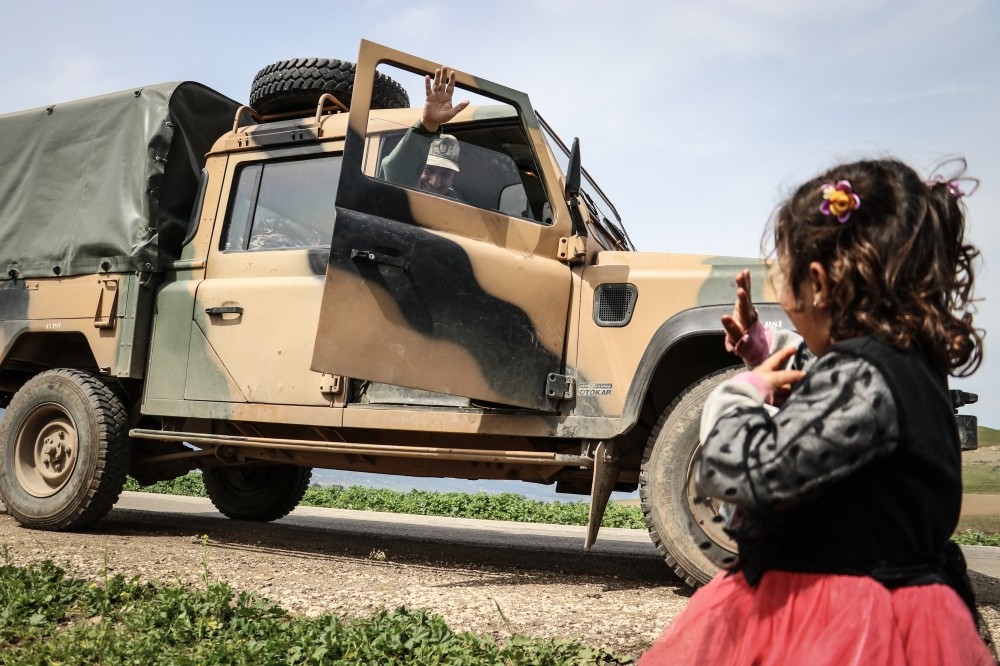 A Syrian refugee child waves at Turkish soldier going to the Syrian border for Operation Olive Branch which aimed to liberate the Syrian city of Afrin from YPG terrorists.
by Melih Altınok Mar 22, 2018 12:00 am

The Free Syrian Army (FSA), backed by the Turkish Armed Forces (TSK), purified Syria's Afrin region of terrorists as a result of a 58-day operation. Moreover, they meticulously did this by observing the right to life of civilians.

In fact, nearly 500,000 civilians live in Afrin, which was encircled with trenches, concrete tunnels and a few thousand PKK's Syrian affiliate People's Protection Units (YPG) terrorists who turned the town into a base. In order to ensure the safety of the civilians, Turkey did not hesitate to choose methods that put its own soldiers at risk when necessary.

The TSK did not carry out airstrikes on civilian areas in Afrin. Moreover, it set up an exit corridor for those who wanted to leave the city, allowing it to remain open until the end of the operation. Today, it is busy cleaning mines and improvised explosives laid among the city's civilians by fugitive YPG terrorists. Of course, it is also recording plenty of U.S.-granted arms and ammunition that were captured from terrorists.

Let me also remind readers that there has been no serious report of a violation of rights that has been proven by independent international organizations about the two-month Afrin operation.

In fact, it is enough to compare two photos, rather than forming so many sentences, to understand the TSK's success and meticulousness in the Afrin operation.

One is the panoramic photo of Afrin where the TSK carried out an operation against PKK-YPG terrorists, while the other belongs to Raqqa, which has been infiltrated by Daesh, another terrorist group in Syria, and witnessed an operation by the U.S.

Those who look at the photo of Afrin are not surprised by the fact that life in the city is returning to normal, not even a week after the end of the operation. This is because the city is in apple-pie order so that the civilians who had left before the conflict can return.

However, Raqqa is nothing less than a ghost town, which the U.S. entered like an elephant in a china shop and massacred thousands of civilians. Today, however, a serious part of those who are refugees in Turkey and other European countries are probably Syrians fleeing from Raqqa, which was destroyed by the U.S. with claims of liberating the city.

Oddly enough, the EU and NATO are disturbed by the photo of Afrin, which has resumed breathing with its residents again, instead of the dead Raqqa, which is reminiscent of an ancient city!

Yet, Turkey constitutes the eastern border of the EU and pact. In other words, the safe zone free of the PKK-YPG and Daesh, which has been created by Turkey in Syria, will be a buffer zone for the EU and NATO as well. In addition to preventing new migration movements toward Turkey and from there to Europe, this operation will also trigger returns.

So, the people of EU and NATO countries can't thank our martyred soldiers enough for the safety of their eastern borders.