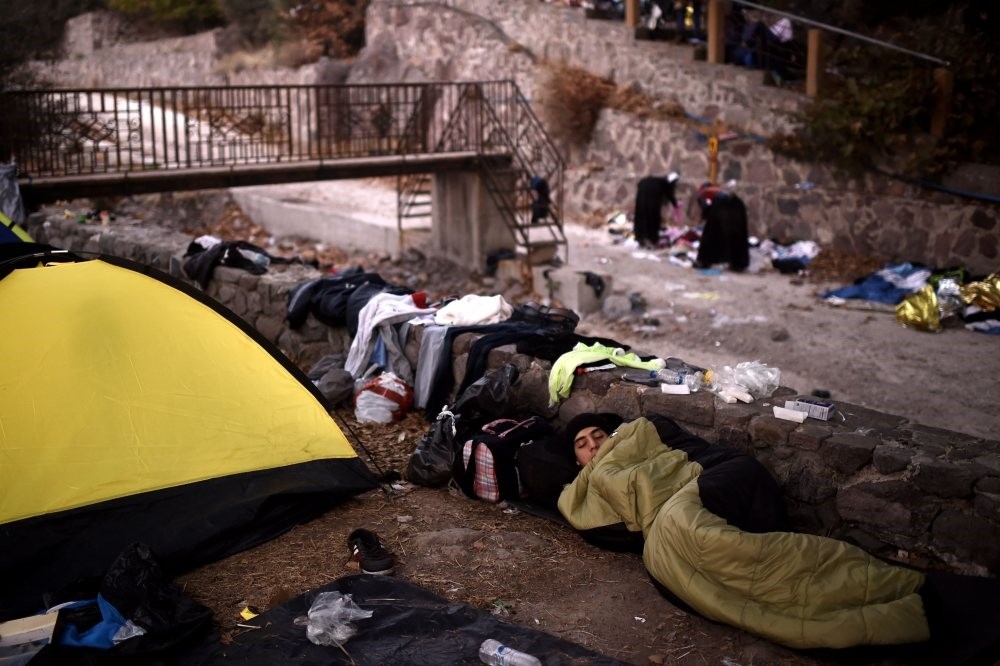 A man sleeps near a tent on the street along with other refugees and migrants after arriving on the Greek island of Lesbos by crossing the Aegean Sea from Turkey, Oct. 7, 2015.
by Melih Altınok Nov 15, 2018 12:00 am

Turkey's role in preventing a mass refugee exodus into Europe deserves fair credit rather than strange and unjustified criticisms, such as those recently made by the European Union

My grandma had experienced the hard times of famine caused by World War II and therefore was obsessively thrifty. Despite all this, she always used to remember me after receiving her monthly retirement pension. She would call me and give me some pocket money as soon as she came home from the bank.

"Spend carefully," she would tell me.

That very night, there wouldn't be any money left in my pocket because the amount she would give me would only be enough to eat something during the day or maybe drink a cup of coffee. Yet still, she would never stop asking me if the money that she had given me had finished or not for the whole month. Each time, I would smilingly say to her, "Don't worry, there is still more."

I miss my lovely grandma very much, who passed away just a few years ago. However, there is, at the moment, another reason for me to remember these times. I'm talking about the recently released report discussing whether the 1.1 billion euros of aid money sent by the European Union to Turkey was used to help the Syrians or not.

For a few days, the European mainstream media reported that the EU has some question marks regarding the matter. Bettina Jakobsen, a member of the European Court of Auditors (ECA), said this week that Turkey refused to provide the list of beneficiaries of the aid. According to Jakobsen, since their court cannot be certain that all the money reached the refuges as it should have, "There is a doubt," in the case and "We have the right to know who benefited from the registered aid. European taxpayers are very worried about it."

I know what Jacobsen is doing is official business, but this is also the legal right of the responsible Family and Social Policies Ministry of "preserving information." As the ministry declared, they haven't shared the report for they need to abide by the Turkish rules. Hence, it is funny that Jacobsen and her team are searching for another underlying reason in it.

It is simply because of Turkey's reported deeds in the refugee crisis. Turkey has so far provided shelter to around 4 million Syrian refugees and spent $30 billion. This cost is rising day by day. There is no need to even mention the social and political prices that Ankara and Turkish taxpayers paid to the EU. That is to say, the would-be 1.1 billion euros is just a fraction of what the Turkish people spent for the Syrians.

Instead of appreciating Turkey for welcoming millions of refugees and migrants on the EU's eastern borders, therefore saving the union from a mass refuge flood, the EU is taunting Turkey with its small aid support. It seems that they will cut off the rest of their promised aid supply of 3 billion euros. Meanwhile, European taxpayers shouldn't feel so happy with that because it is precisely known where the aid money will be sent to. Instead they won't send it to Turkey, which is preventing a possible migration exodus.

Guess which country I'm talking about? Greece. But no one is talking about their reported torture of scores of refugees, which they then sent back to Turkey this week. I wonder if Jakobsen's very EU court will prepare a report comparing the costs of aid between Turkey, a non-member country already shouldering the economic and social burden of the European countries, and Greece, a member country which itself is a pure burden to the union.

It is clearly seen that the European Union, which was established following the sad experiences of the millions of refugees in the post-World War II period, is ignoring common values such as human rights. However, if the union is really thinking about the welfare of its own citizens, the abovementioned report will be more beneficial rather than the recent report read by Jakobsen.