Darker clouds on the horizon for Europe 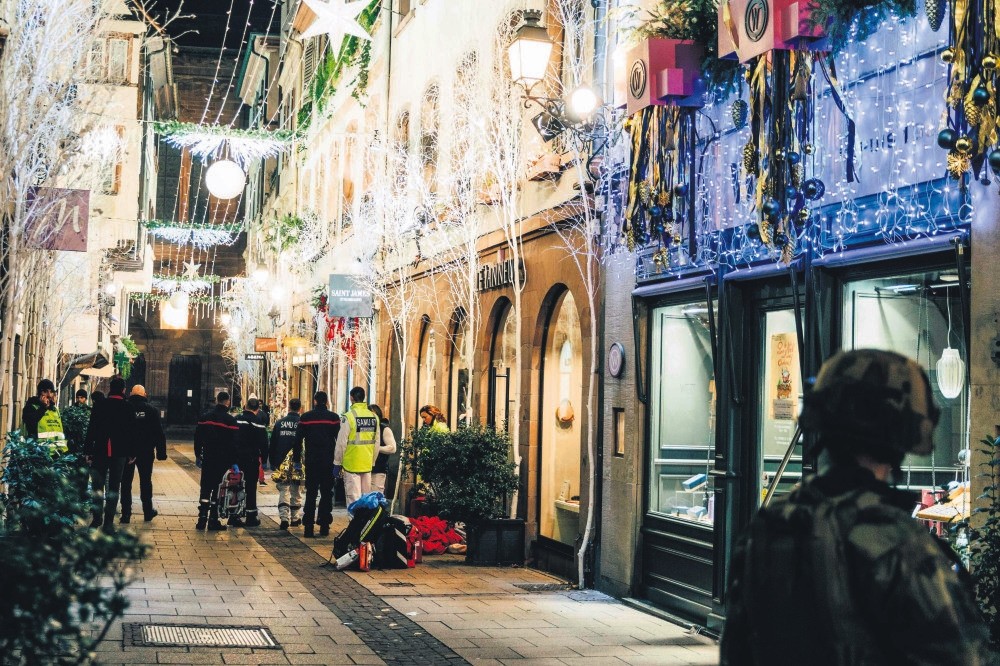 Emergency workers and police officers intervene after a deadly shooting near the Christmas market in Strasbourg, France, Dec. 11.
by Melih Altınok Dec 13, 2018 12:00 am

Early Wednesday, France was hit by a deadly terrorist attack as a gunman opened fire on dozens of civilians near a Christmas market in Strasbourg, killing four people and wounding 11 others. The suspect in the fatal shooting, according to French media, is a 29-year-old resident of Strasbourg, Cherif C. The suspect has a criminal record and was under police surveillance as a possible terror suspect, the French media also said. Following the horrible incident, the country immediately raised its terror alert and took high-level security measures.

For weeks, France has been at the top of the headlines of world media since the "yellow vests" – the gilets jaunes – escalated a still-ongoing major uprising against the government. Since then, the actual reason behind France being in the mire is the most asked question around the world. The first answer that naturally comes to mind is that domestic problems, particularly economic ones, could trigger such a mass revolt. Yet, the motivation behind the protesters is still being sought by experts and journalists.

Last weekend, I went to the French capital from Istanbul to cover and closely watch what's really going on in France. In my first day after arriving in the country, I immediately became one of the thousands that were hit by pepper gas fired by French police on the Avenue des Champs-Elysees. At night, I spent my time with non- and anti-protestor French citizens and tried to draw a comparative frame to find factual and comprehensive answers to my questions above.

There is no doubt that France has been struggling with a serious economic regression for a while. The cost of living is very high, and income is inversely at a lower level. The yellow vests in the streets, the majority of whom consist of laborers and blue-collar workers, are therefore right in their objection. They are reacting to the government's recently delayed decision on economic measures. The protests say that this economic pact would place a higher burden on their shoulders rather than on rich people, if it wasn't suspended. However, obviously, there can be no excuse for violence, looting, vandalism or terror actions.

The other French, who remain distant from or disapprove of the yellow vests, are generally individuals from the middle-class or have a higher income. Yet, they, as the yellow vests do, find President Emmanuel Macron incapable as well. The non-yellow vest French say that the street violence is not fueled by French police, but some "foreigners," including African or Asian French citizens, and that these people differ from the yellow vests. According to them, all French citizens are supposed to raise their demands based on the country's conditions and realities, and be content with what they have.

What France is experiencing is not unique to the country but is a harbinger for the whole continent as almost all European countries lack sufficient brands that can compete against the rising stars of the U.S. or Asian states, and are furthermore suffering from an elderly population and cannot embrace migration.

To make it worse, the European electorate is becoming radicalized as they become dissatisfied with their current governments for not being able to generate solution-oriented policies against global and domestic problems. The electorate has accordingly shown a tendency to support far-right and populist figures and parties against them and it is an unfortunate, alarming picture.

Just as observed in recent history, economic problems are again leading to major social cracks in Europe. Hopefully, the cloud in France (but not this time in German) will never reach the whole world.

In the meantime, European states should be aware that members of the outlawed PKK or the Gülenist Terror Group (FETÖ), whom they welcomed within their borders, apparently give their full support to the mass violence in France. These fugitive terrorists never refrain from doing the same in other European countries.

Terrorism is like a boomerang. Therefore, tolerating any terrorist element or formation anywhere in the world, will, one day, absolutely hit its backers and supporters at an unexpected time.