Who is responsible for the mess in Venezuela? 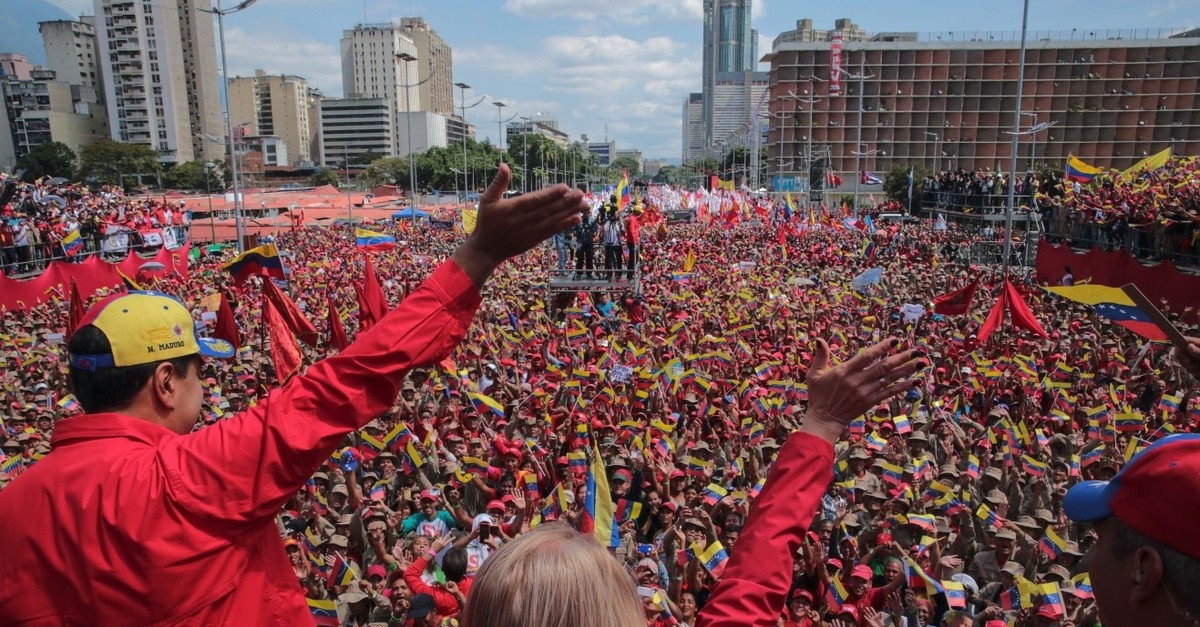 Venezuelan President Nicolas Maduro (L) and his wife Cilia Flores wave at the crowd during a gathering to mark the 20th anniversary of the rise of power of the late Hugo Chavez, in Caracas, Feb. 2, 2019.
by Melih Altınok Mar 18, 2019 1:21 am

For a week now, Venezuela has been experiencing power outages. My local news sources say the situation in the country, which is hardly safe due to economic problems, is worsening. The looting has already begun.

The exact number of people who have lost their lives due to power outages is unknown. There have been dozens of deaths. The number of people who died at a hospital called Manuel Nunez Tovar in Monagas state was 13. When we add those who depend on dialysis machines or electricity-operated living units at home, the real figure must be much higher.

Due to power outages, there is a gasoline shortage. We have been watching videos showing that queues in front of gas stations have reached kilometers in length.

And the catastrophe that will increase the death toll depends on diseases! Water in the country does not flow, either.

How have things reached this point in Venezuela? What has happened to the country with the world's largest oil and gas reserves and why have gasoline and electricity, which were sold dirt-cheap previously, become a problem?

Is it possible for President Nicolas Maduro to make the country so bad on his own?

About one month ago, I stayed in the capital of Caracas for a week to follow what was going on in the country. Although my ideas were different before I went to the country, I found that Maduro was not very skillful.

However, it is not possible to explain the setback in the country with the failure of President Maduro or his ideological obsessions alone.

This is because there is obvious sabotage by the U.S., which has made it clear that it wants to overthrow Maduro and replace him with the U.S-linked Juan Guaido of the opposition.

Do you think it was Maduro who conducted a cyberattack on the Guri hydroelectric complex that led to a power outage in Venezuela?

Moreover, it is a scandal that Guaido, who has been appointed as interim president by the U.S. in Venezuela, said that the power outage would end only when Maduro goes.

The New York Times' recent news that U.S. aid trucks entering Venezuela from Colombia were burned by Guaido's supporters should be considered in this framework.

What do the "contemporary world," "free media" and "human rights organizations," which say that they want Maduro's withdrawal for the sake of Venezuelan people, democracy and humanity, think about this?

Do European countries, which know that the opposition is responsible for the sabotage that has led to deaths, not the elected president or the so-called "populist" administrations of the Lima Group, approve the further worsening of conditions at the cost of civilian lives due to sabotage, so that things go well in a country?

Oddly enough, we have not yet heard a single sentence from human rights organizations that published pages of analyses on tear gas used by the police during demonstrations about the dozens of innocent civilians killed by the recent sabotage.

What a great tragedy! We are extremely sad.

What is even worse is the fact that we pin our hopes on Maduro, as his opponents are in such a condition.

May God help the people of Venezuela.