What's going on in Venezuela? 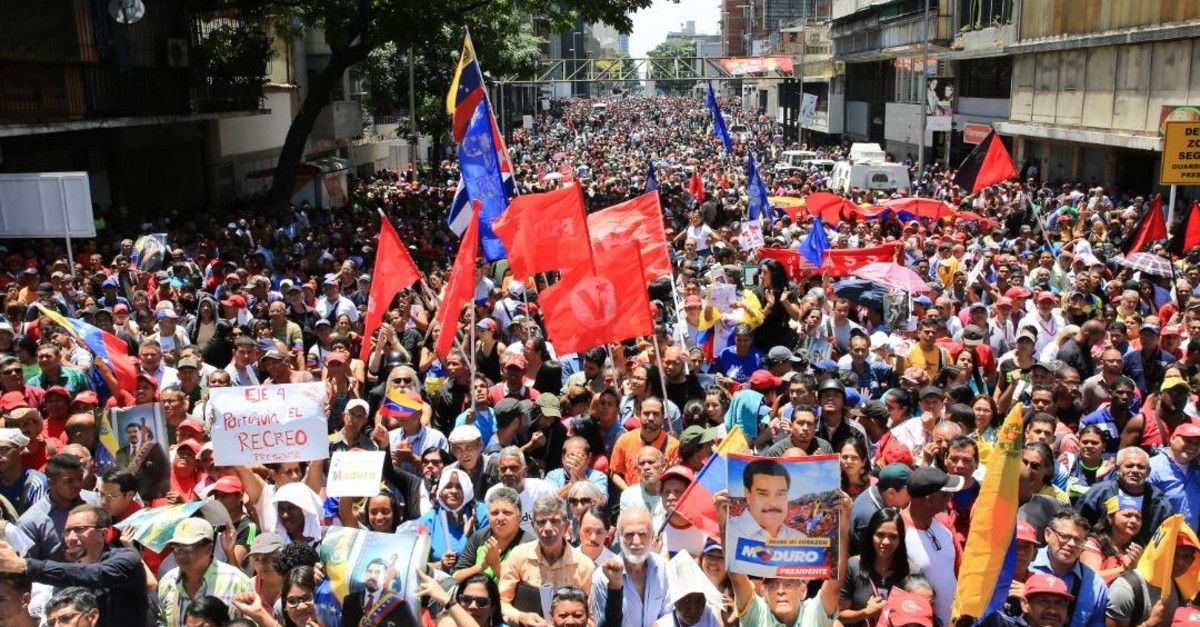 Supporters of Venezuela's President Nicolas Maduro take part in a rally in support of his government in Caracas, Venezuela, April 30, 2019.
by Melih Altınok May 02, 2019 1:30 am

Venezuela has witnessed yet another military coup attempt. Although I call it a military coup, this attempt, which we watched live, seemed quite different from the others. This is because the army was the most insignificant subject in the process. Armed guards are only one of the instruments used to overthrow legitimate governments. Unlike usual military coups, we can see that all the elements have placed their cards on the table this time. For instance, the U.S., who confessed that they organized coup attempts in Latin America, Turkey and many other countries after many years, has claimed responsibility in the wake of events this time. The officials of the country supported coup plotters, who poured to the streets in defiance of diplomatic practices, international law and accepted norms. It may sound as though things are happening in the colonial era, not in the 21st century.

However, Juan Guaido, one of the opposition leaders whom the U.S. appointed "interim president" to Venezuela, also joined the coup attempt on the streets despite being a civilian.

Even former Caracas Mayor Leopoldo Lopez, who was put under house arrest by the Venezuelan judiciary, joined in.

Coup plotters released Lopez, who is known to be the main "charismatic leader" of the U.S.-led coup process. In return, he took over the task from Guaido, who has so far acted for himself, with a soldier's salute in the street.

According to information coming from Venezuela at the moment, the unlawful attempt seems to have been repelled. However, this attempt, which civilian politicians initiated with the support of the army against their rivals whom they could not overthrow in the elections, has already been recorded as a "disgrace" in the history of democracy.

It seems that Lopez and Guaido emulate the reputation of Augusto Pinochet who overthrew socialist Salvador Allende in Chile, becoming an object of hatred in the history of Latin America.

Of course, we should not forget the role that the world media played in this attempt. This is because the attitude of "the free press without borders" was at least as shameful as those of the elements mentioned above.

Since the first hours of the military attempt, CNN and the like made sided broadcasts which supported and encouraged violence in the streets. They gave justification for the street tyranny displayed for founding a government in Venezuela that the U.S., not the electorate, wanted.

The U.S. and European media, which violate the boundaries of journalism, forgot Nicolas Maduro, who came under attack. However, with the content and visuals they chose, they presented Jacobean politicians, who were at the forefront of the coup attempt, as heroes.

We thought that U.S. President Donald Trump was exaggerating when he called such organizations "fake news." To my surprise, however, perhaps he understated it.

As journalists who observe universal values, adhere to the principles of democracy, side with civil politics and human rights and advocate peace and reconciliation, but not violence, we are ashamed of them.

I wish a speedy recovery for the people of Venezuela, which I had just visited a short while ago, to follow the process in the country.