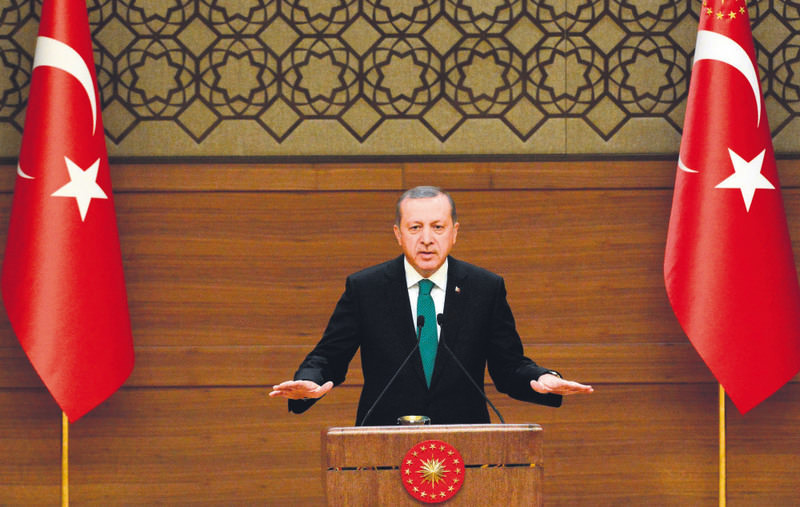 Opposition parties have based their campaign on hostility toward President Erdou011fan, who is not even a candidate in the June 7 parliamentary elections.
by Merve Şebnem Oruç May 27, 2015 12:00 am

Turkey's June 7 general elections are approaching and, unsurprisingly, the hottest debate is again President Recep Tayyip Erdoğan. He is not a candidate in the elections, but still the entire election is about him. Opposition party leaders are rallying and taking their gloves off against Erdoğan. From the Nationalist Movement Party (MHP) to the pro-Kurdish Peoples' Democratic Party (HDP) and the main opposition Republican People's Party (CHP), all are running their campaign mostly against him. The Gülenist media, the news network of Fethullah Gülen's organization, is constantly targeting him, not hesitating to form an alliance with or call the followers of Gülen to vote for the HDP, one of their biggest enemies in Turkey once, while the long-time CHP-supporter Doğan Media Group is doing almost the same.

Believe it or not, a coalition between the CHP, MHP and HDP is appearing in the anti-Erdoğan camp's dreams. The deputy co-chair of the HDP, Meral Danış Beştaş, is thanking the outlawed Revolutionary People's Liberation Party-Front (DHKP-C), the group that recently killed a prosecutor in a terrorist attack in the Çağlayan Courthouse, for their support after the organization released a statement in which they declined the accusations of the government regarding the DHKP-C link in the latest bombings of provincial HDP offices. Even now while I've been penning this piece, a campaign bus of an opposition party is passing through the street, announcing their biggest promise: "We will not let you become a president [in a presidential system]."

Erdoğan, on the other hand, is not silent over the anti-Erdoğan coalition camp's nonstop campaign. He is slamming that camp during his meetings with people from different circles, or in the grand openings of infrastructure and public works projects. Opposition parties and figures are accusing him of not staying silent during the countdown to the June 7 general elections and acting against the Constitution while no one stops for a second and looks at the rallies filled with the cursing rituals against him.

Meanwhile, Justice and Development Party (AK Party) supporters on the street usually say, "I'll vote for Erdoğan," when they are asked, even though Erdoğan is not a candidate. He founded the AK Party in 2001 and he is still de-facto leader of the party in people's minds and hearts. That is valid for both his supporters and his opponents well. The June 7 general elections will be the third election in Turkey in the last two years. The opponents of Erdoğan turned the local elections on March 30, 2014 into a symbolic referendum for him while he was still prime minister. He and his party successfully passed the test. In the presidential election on August 10, 2014, one of his biggest promises during his presidential campaign was transforming Turkey's parliamentary system into a presidential system. He got 52 percent of the vote and became the first directly elected president of Turkey.

The system has already changed in Turkey even though it is not formally written in the Constitution yet. The people voted for him and showed their support for his promises on changing the parliamentary government into a presidential system. That is why he has every right to speak freely and to act in accordance with that fact in order to start the transformation of the system. Things have transformed in Turkey, either the anti-Erdoğan camp accepts it or not, now it is time to change the Constitution.
RELATED TOPICS