Why did international media fail to understand Turkey again? 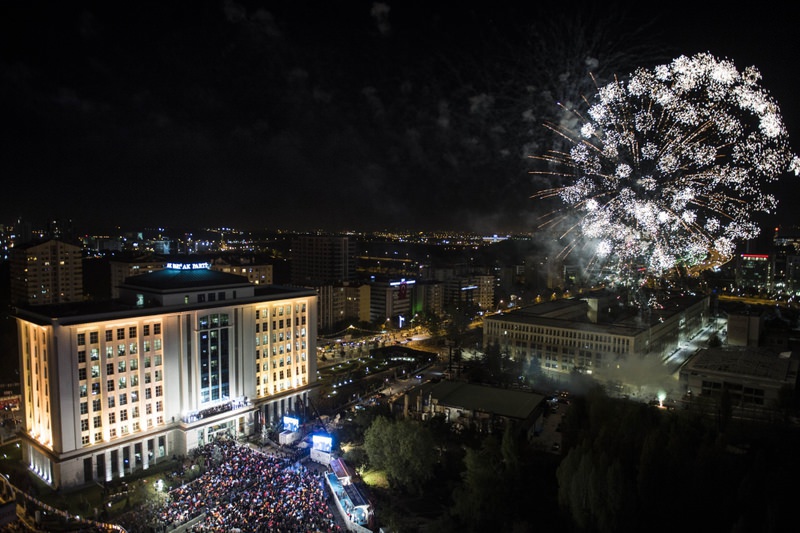 Following PM Davutou011flu's balcony speech to celebrate the AK Party's victory with supporters, a fireworks display was held near the party's headquarters.
by Merve Şebnem Oruç Nov 04, 2015 12:00 am

The analysts who have been talking to only the elites of Turkey, observing secular neighborhoods and believing in Gülenist media alone, have failed to predict the results of Sunday's elections

The outcome of the Nov. 1 general elections has disappointed many, especially the international media, its correspondents in Turkey and Western analysts. The results stunned those who had thought that the Justice and Development Party (AK Party) would get similar results to those from June, or worse. They had the idea that the AK Party already fell into decline; the ruling party of Turkey for 13 years was finally about to be pulled from power by leftists who cooperated with the old guard and Gülenists who attempted to overthrow the AK Party government and failed in December 2013.

Portraying Selahattin Demirtaş, co-chair of the Peoples' Democratic Party (HDP), as the savior of secular Turkey, they thought that the rise of the HDP, which lost 18 seats to the AK Party from June 7 to Nov. 1, would continue and there was no way back. Right after the elections in June, the outlawed PKK declared the cease-fire was over in a statement dated July 11. It was 10 days before the Suruç suicide bombing in which 33 people lost their lives. Following the bombing, which was perpetrated by the Islamic State of Iraq and al-Sham (ISIS), both the PKK and the HDP blamed Ankara for supporting ISIS and the PKK claimed credit for the killing of two security offices in retaliation. That was how the recent terror attacks by the PKK started again and the operations on PKK targets began. Already at the first half of 2015, the number of violent PKK attacks in Turkey exceeded 1,000. But instead of seeing the chain of incidents and figuring out who violated the peaceful environment, they chose to accuse President Recep Tayyip Erdoğan, who officially started the reconciliation process with the PKK before they ended it.

This is not the first time so-called Turkey experts were wrong about the situation in Turkey. I lost count of the analyses arguing that the end of Erdoğan has arrived, published in respected international papers in the last three years. The majority of Turks reacted to false reports many times, arguing that they did not reflect reality. Covering reports on analyses of Turkey without asking a single AK Party supporter for their opinion caused incredible interpretations and predictions. Many tried to explain the dynamics of Turkey to those convinced analysts who have been talking only to the elites of Turkey in secular neighborhoods and believing Gülenist media. These were obviously the major reasons why they are missing the whole picture, but of course, wishful thinking cannot be disregarded. The failure was inevitable for them as well, drawing a rebuff from the majority of Turkey. Even so, they did not accept their mistake. They chose to cross swords and blamed the people, criticizing them for being pro-government trolls.They still do not accept that they were wrong and they misread Turkey again. Evaluating the election results, many argue that fear and chaos have won in Turkey and almost half of the electorate voted for the AK Party because they were threatened. I must say that there is a threat and a huge pressure on the public as opposition parties and figures tried to scare the people, saying there would be a civil war if the AK Party won. A day after the elections Nokta magazine's cover featured the date Nov. 2 as "the start of Turkey's civil war." Other than that, the intimidations of secular people and Gülenists implying or speaking out that a military coup would be staged if the AK Party came to power again never ended. Not to mention threatening people with the escalation of terror, polarization and tension, the anti-Erdoğan political parties, media and circles held many figurative guns to society's collective head. Despite this, people still voted for the AK Party. If there was a huge polarization in Turkey, nationalist parties would have increased their votes, not the AK Party, which is centrist and national, but not nationalist. The pro-Turkish Nationalist Movement Party (MHP) lost around 2 million votes while the pro-Kurdish People's Democratic Party (HDP) lost about 1.5 million. Many Kurds and Turks see the AK Party as their savior from polarization, terror, instability and other threats. In the last five months, people watched a trailer of what would happen in Turkey if they gave a chance to others instead of the AK Party, and they did not like it. It is now time for international media correspondents to accept their faults and to start to talk to people from all segments of society in Turkey to see the real picture if they can manage to stop involving their feelings and leave aside their prejudices of those, who clearly do not share their ideas, thoughts, love and hatred.
Last Update: Nov 04, 2015 2:12 am
RELATED TOPICS