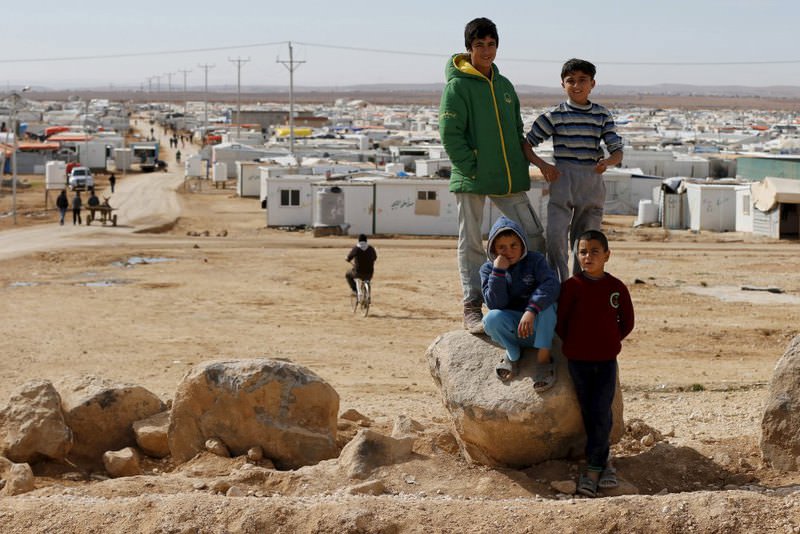 Syrian refugee children standing on a rock in Al Zaatari refugee camp in the Jordanian city of Mafraq.
by Merve Şebnem Oruç Feb 04, 2016 12:00 am

Russia, just before the peace talks in Geneva started, has once again proven through its violation of Turkish airspace, that it is not sincere in finding ways for permanent peace in Syria

Russia started to send warplanes, tanks and artillery as well as combat troops to its air base near the port city of Latakia in Syria in August 2015. According to authorities from Russia and the Syrian regime, this move was in response to a formal request from Damascus to Russia for airstrikes. The move came right after Ankara and Washington signed a deal in June to open Turkey's İncirlik Air Base to U.S.-led coalition warplanes fighting DAESH. The agreement included a plan for a de facto "safe zone," which would stretch for around 100 kilometers along the Turkish-Syrian border from the town of Jarablous to Marea and would be about 60 kilometers deep into Syrian territory, reaching the outskirts of Aleppo. Accordingly, coalition airstrikes would clear the area in question of DAESH to help Turkey secure its 900-kilometer border and establish a safe haven for civilians fleeing regime airstrikes. However, the game once again changed in war-torn Syria after Russia decided to enter the fray.

Russia began conducting its first airstrikes on Sept 30, 2015, around the cities of Homs and Hama, targeting opposition positions. The Kremlin has claimed many times that it has been fighting DAESH, but its airstrikes have mostly focused on opposition-held areas, overwhelmingly targeting hospitals, schools and critical infrastructure and not avoiding civilian casualties.

In the first days of October, the Russian air force increased attacks in northern Syria, bombing Jisr al-Shughur and Jabal al-Akrad in Latakia province and Mount Zawiya in Idlib, while the Syrian regime's ground forces, Hezbollah and Shiite militias were carrying out offensives against the areas with Russian air cover. An offensive targeting Aleppo came in mid-October. Then in November, the ground forces of the Syrian regime with the help of Hezbollah, Iranian forces and Russian airstrikes started to attack the Turkmen Mountain region, aiming to drive out of Syria Turkmens, who have ethnic ties with Turkey, as well as others who oppose President Bashar Assad.

On Nov. 24, just a week after the G20 summit in Antalya where President Recep Tayyip Erdoğan hosted Russian President Vladimir Putin and many other world leaders, Turkey shot down a Russian Su-24 jet fighter over Turkey's southeastern Yayladağı district in Hatay province on the Turkish-Syrian border right across from the Turkmen Mountain region due to air space violations despite multiple warnings, according to Turkish authorities and NATO sources. All hell broke loose between Turkey and Russia after this incident. Moscow chose to spark the biggest crisis between the two countries since the Cold War, threatening Turkey in many ways and imposing a series of sanctions. Relations between Ankara and Moscow are now at their lowest point in decades.

In the meantime, the focus of Russia's airstrikes shifted to areas close to the Turkish border outside of the regime's front lines. In late November, with the support of Russian airstrikes, the People Protection Units (YPG), the armed wing of the Democratic Union Party (PYD), which is the Syrian offshoot of the outlawed Kurdistan Workers' Party (PKK), attacked Azaz close to the area where Turkey was planning to establish a safe zone on the ground. While Russia started an explicit effort to threaten Turkey's security and increased its attacks on Turkmens living almost near the border, Russian media started to use the same anti-Turkey rhetoric that the PYD and PKK use, accusing Turkey of providing assistance to radicals like DAESH. Like making Syrian ports its military bases and Russian airplanes Syria's air force were not enough, it is reportedly making another air base in Qamishli on the Turkish border.

Gaining leverage on the ground, Russia was finally ready to start talking about a political solution in Syria. Following peace talks in Vienna, the U.N. Security Council adopted a resolution on Dec. 18 concerning the Syrian civil war with no mention of the future of Assad, calling for an immediate ceasefire and defining a January deadline for U.N.-facilitated peace talks to commence. Leave aside the fighting sides on the ground, Russia has not stopped airstrikes targeting opposition positions.

Ahead of the peace talks that have begun in Geneva, another Russian fighter jet violated Turkish airspace. It has been confirmed that Russia's most advanced Su-35 fighters have now been deployed to Khmeimim air base in Syria. Ankara is likely to avoid a spiral into conflict, but Russia is making another crisis almost inevitable, provoking Turkey to respond. What kind of peace does Russia want in Syria while threatening Turkey, a NATO member, every way it can? And how does Russia think that peace talks in Geneva can be kept alive, while it continues airstrikes? Is it me or is Russia's attitude a gun to the head of the opposition to force them to accept Assad staying in power?
RELATED TOPICS