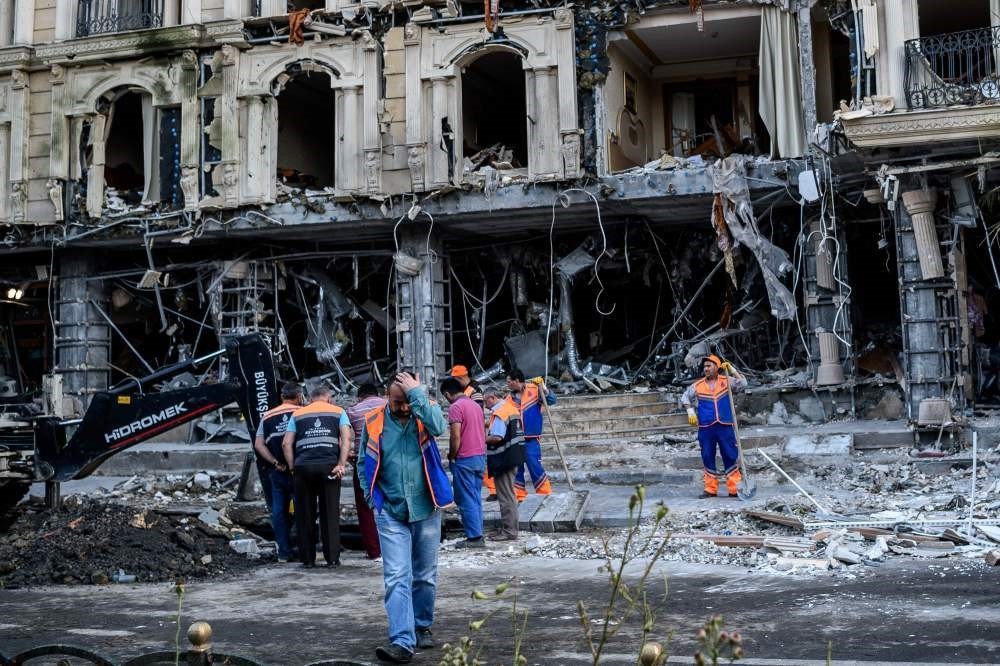 Municipal workers cleaning the damages caused to a hotel and the road by the latest PKK terror attack in the Vezneciler district of Istanbul on June 7, 2016.
by Merve Şebnem Oruç Jun 09, 2016 12:00 am

On the day Erdoğan signed the law that Turkish Parliament approved lifting all lawmakers' immunities, including that of HDP deputies, Istanbul was hit by car bombing attack by PKK militants

As President Recep Tayyip Erdoğan signed the law lifting the immunities of deputies who have criminal proceedings against them for one time only, Turkey has reached a new stage in the fight against terrorism. Parliament approved the lifting of lawmakers' immunities 15 days ago, allowing the law to go directly into implementation, with no need for a referendum. Of the deputies, 138 had dossiers drafted against them, while 216 of the total 667 dossiers concern terror-related charges, which were the main reason for the law.

On the day Erdoğan signed the law, at least 12 people were killed in a car bomb attack targeting a police vehicle in central Istanbul, at a busy intersection during rush hour in the Vezneciler district, close to historical tourist sites. The bomb attack was the latest in a series of deadly terror attacks since last summer. Istanbul had already been hit by a pair of bombings, both blamed on DAESH, while two attacks in the capital Ankara were claimed by a group linked to the outlawed PKK terrorist organization. These are just four of numerous terror attacks threatening Turkey. The Turkish army has been pursuing air campaigns on two fronts this year: one targeting DAESH positions in northern Syria, and another against PKK camps in northern Iraq; and the fight against terror groups inside the country continues with no break or hesitation. But heartsick Turkish people are forced to wonder how many more lives will they lose to terror?

Since the Turkish-Kurdish peace process, initiated in 2013, was put in the freezer and a new period of intense fighting began, everyone agrees on the path taken in fighting DAESH, but there are differing views on Turkey's fight against the PKK terror. Let's leave aside for now the oddness of approaching two terrorist groups from different points of view. While many, including most conservatives and nationalists, think the peace process was a total mistake that helped the PKK gain courage and strength, others see the state's tactics as excessive. The latter considers steps like lifting the immunities of lawmakers who have dossiers involving terror crimes as going too far, advocates that the state fought the PKK for four decades with similar methods and didn't win, and urges the government to immediately resume peace talks. However we are talking about the accusations including directly supporting terrorism here, such as Peoples' Democratic Party (HDP) deputy Faysal Sarıyıldız from Şırnak, who supplied arms to the PKK in July 2015, or HDP deputy Tuğba Hezer, who attended a condolence ceremony held for the Ankara suicide bomber who killed 29 people in February 2016. And if we are making analogies with past experiences, we should not forget to put forth the differences between now and then.

It's true that the methods adopted by the state back in the '90s were terrible and horrifying, but everybody knows that comparing now and then in terms of Kurdish rights and freedoms is absurd. (Well, I think I should underline here that "everybody" excludes those who legitimize the violence of the PKK terrorist organization because of their anti-Erdoğan obsessions.) What makes today different from the past is the peace process, which was started by Erdoğan with sincerity and by taking great risks, and Ankara's will and patience for the progress, despite various provocations. The Kurdish people in Turkey have seen that it was the PKK who left the table of peace negotiations, no matter what the PKK may say to its friends outside Turkey with accusations such as Erdoğan ended the cease-fire, or he wanted war not peace. If such allegations were true, the Kurdish people would believe them and respond to the PKK's calls for rebellion. If the peace process wasn't initiated in 2013, the Syrian civil war would have affected Turkey much worse in a way incomparable to today, and the Kurdish people would have believed the lies of the PKK, such as "DAESH was supported by Ankara." I have no doubt that Turkey would have fallen into a bloody civil war, as some desperately desire, considering the chaos and instability in the region, if we didn't experience the peace process.

But we did have this experience. The PKK might get support from international circles, including media that is eager to bend the truth and twist the real situation in Turkey, but it couldn't get the real support it needs, that of the Kurdish people. The Kurds didn't go out when the PKK leaders and the HDP members called on them to do so; they didn't overlook the brutality and the violence of the PKK against themselves and Turkish security forces this time. They wanted the HDP to make politics on behalf of the Kurds, they didn't ask for a war.

The peace talks were the last exit before the bridge for the PKK, but the leadership didn't want to take it. Of course, there will be peace someday, but not today, while the bombs explode in Turkey until the PKK surrenders.
Last Update: Jun 09, 2016 11:39 am
RELATED TOPICS