Wind of political change in the Middle East 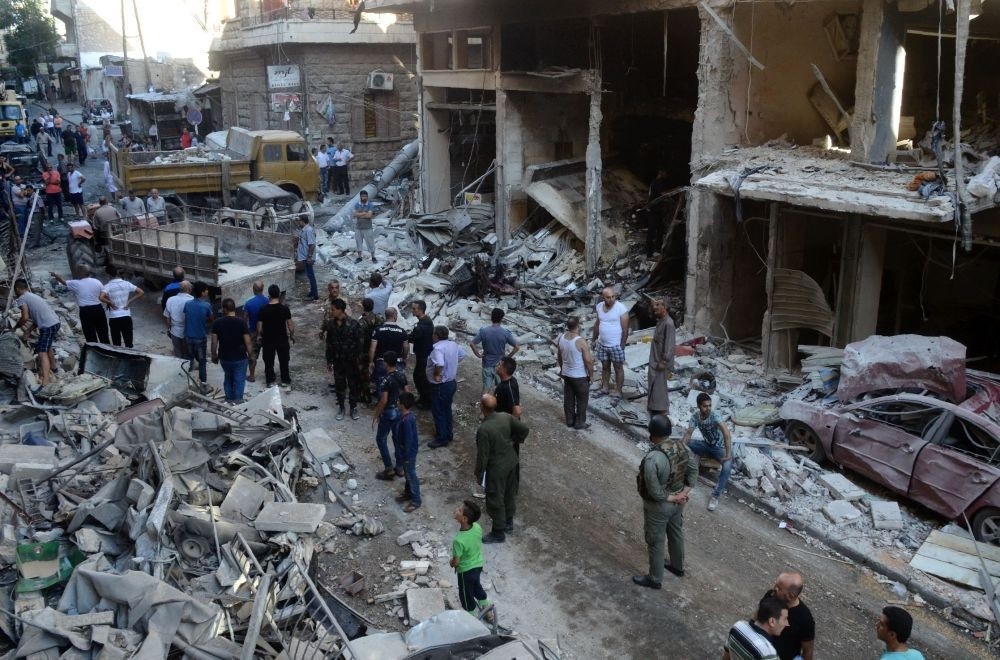 Syrians looking at the damage in a street in the ancient Syriac Quarter of the regime-held area of the northern Syrian city of Aleppo, July 11, 2016.
by Merve Şebnem Oruç Jul 15, 2016 12:00 am

The protests that began in Tunisia in December 2010 were dubbed the Arab Spring by the international media. The scale of the mass mobilizations in Tunisia, Egypt, Libya, Bahrain, Yemen and Syria was unprecedented. In order to understand and describe the nature of the protests that swept through much of the Middle East and North Africa in a short time and made a politics of hope look possible, the fabric of Arab political systems have to be closely examined. According to many, what lay behind the unstoppable, widespread protests was that Arab state systems are the byproduct of an order established in the post-World War II era and people finally stood up to say enough is enough.

It was expected that the uprisings would lead to a liberal period in the Arab world or an Arab renaissance, but after the democratic openings following the ousters of dictators, it was Islam, not liberalism, that was on the rise. Islamist groups like the Muslim Brotherhood in Egypt and the Ennahda movement in Tunisia rose to power and became the biggest alternative to rule after decades of autocracy. That is why Western pundits started to say that it would be more accurate to use the term "Islamic Spring" instead of Arab Spring.

It was either a spring for Islam or Arabs, but winter came instead of the expected summer. Counter-revolutionary forces of the old guard were back in the game in 2013, thanks to financial support from several Gulf countries while Syrian dictator Bashar Assad stayed in power, killing thousands of his own people under Iranian sponsorship. In the meantime, al-Qaida branches seized the opportunity to gain influence and power after the rise of non-state actors during the unleashed chaos in Syria, Libya and Yemen. Hundreds of thousands have died in the civil wars, millions have been displaced and the entire region is in a much worse situation than before the uprisings.

The Western world, which is led by Washington and shapes most global politics and controls the mainstream media, changed its Middle East policy in 2013. The U.S. was correcting its mistake, as the Arab Spring was supposed to follow a liberal order, not an Islamic one. Accordingly, the results coming out of the ballot boxes showed that the democratic openings were going off the rails and the Islamic train had to be stopped. The bloody coup in Egypt was overlooked and the violated red lines in Syria were ignored. Instead of guiding Arab countries to find the right way in the post-revolutionary era and giving them some time to learn and gain experience, fear of Islam outweighed everything. The West has tolerated the violence of the old regime forces and opened space for the bloodshed of terrorist groups in order to stop Islamism.

What Turkey has passed through since 2010 is another side of the story. In the beginning, Turkey was identified as a potential paradigm for the Arab world. Its capacity to conduct democratic elections in which Muslim democrats can participate and be elected made Turkey a model for the democratization of Arab states. However, when the West abandoned its Arab Spring policy, Turkey was forced to choose the "right" side for the sake of keeping the existing world order and preserving the balance. But Turkey was already deeply involved in the winds of change in the region. It was dragged into the chaos in Syria mostly by its ally Washington and, then again, Washington was asking Ankara to change its stance or be left alone. However, it was almost impossible for Turkey to make any drastic change while there is a huge humanitarian disaster in its southern neighbor. So Turkey chose to be on the right side of history, but was going to pay a heavy price.

President Recep Tayyip Erdoğan, who called on Egyptians to adopt a secular constitution during his visit to Egypt when he was prime minister in 2011, was going to be intentionally depicted as a compulsive Islamist, an authoritarian and a dictator. He had said: "A secular state respects all religions. Do not be wary of secularism. I hope there will be a secular state in Egypt," and yet, suddenly became a radical in the eyes of the West in 2013. Erdoğan was not, of course, renouncing Islam, but he was a living example that a Muslim democrat can succeed in a secular state and become prominent in world politics. He did not kneel, so his image had to be destroyed.

After three years of adversity, isolation and international pressure, Ankara is now revising its foreign policy. Some might think that Erdoğan is finally settled down looking at Ankara's changing discourse and the signals of a new period regarding foreign relations. But we should not look past the policy changes of other countries in the region. For example, there is now a U.N.-backed unity government in badly fractured Libya where government forces are fighting against DAESH. Saif al-Islam Gadhafi, Muammar Gadhafi's prominent son, who was sentenced to death last year, has been reportedly released from prison and is now sending messages for Libya's unity. Meanwhile, Tunisia's Rashid Ghannoushi announced last month that Ennahda has distanced itself from political Islam since terrorism and violence ruined it. Ennahda previously survived the political chaos of the post-Arab Spring era by making coalitions and sharing power.

As much as we can see, there is now winds of political change in the whole region as DAESH is a threat to everyone in the world. But I am not sure if a united fight against terrorism, which was fed by the old regimes in the first place in order to gain what they lost, will be successful.
Last Update: Jul 15, 2016 12:13 pm
RELATED TOPICS