Turkey's NATO membership and move to cement ties with Russia 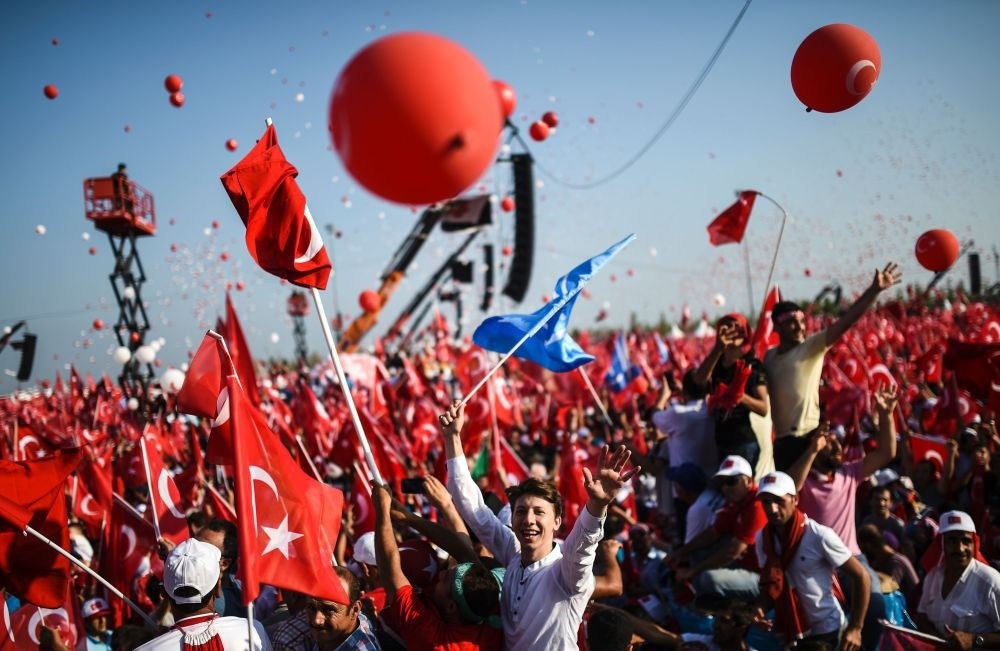 People waving flags as they stand in front of giant screens next to balloons in the color of the Turkish national flag in Istanbul at the Democracy and Martyrs Rally against the July 15 coup attempt, Aug. 7.
by Merve Şebnem Oruç Aug 11, 2016 12:00 am

Today, there is fear in Western capitals as NATO-member Turkey could be drawn closer to Russia than ever before, but to be honest, it is not Turkey's fault

Right after the failed July 15 coup attempt when Turkish authorities began to detain coup plotters and dismiss suspected members of the Gülenist Terror Cult (FETÖ), the Washington Post reported that U.S. Secretary of State John Kerry said Turkey's actions could have consequences for the NATO alliance if it went too far. As it drew a huge rebuff, the U.S. Embassy in Ankara had to deny the report.

Then last week, upon growing public pressure on Washington to extradite FETÖ leader Fethullah Gülen to Turkey, the New York Times' Editorial Board, taking the risk of facing opposition from the people of Turkey, alleged that Turkey's "new wave of anti-Americanism that, combined with a sweeping government crackdown against enemies real and imagined, poses a serious risk to NATO." NATO sources had to say that the New York Times' opinion does not reflect the truth.

It is not something new for the American media to threaten Turkey with its NATO membership. We have seen similar articles and reports attacking Turkey for years whenever Turkey and the U.S. disagree. It is almost the same in Europe, as it puts pressure on Turkey through the media when Ankara differs with European countries on any subject. Turkish society is fed up hearing at every turn that Turkey might not be a part of the EU, especially when it is related to Turkey's internal matters, sovereignty and security concerns. Turks no longer have the ambition to join the EU, which is actually now on the brink of disintegration anyway. Likewise, Turks have started to discuss if NATO membership is really necessary and beneficial to their country.

Let us leave aside childish blackmail and talk straight. Turkey is more important for NATO than NATO is for Turkey. Turkey joined NATO, which 12 countries founded in 1949, in 1952, even before European countries like Germany or Spain. The decision to make Greece and Turkey members of NATO at that time in the first NATO enlargement stemmed largely from Cold War strategies against the Soviet Union. The membership of Turkey, which is still a strategic ally at the most eastern end of NATO's territory today, was previously connected with the construction of İncirlik Air Base and the signing of a joint use agreement in 1954. Now, however, there is more than that.

At the 2010 Lisbon Summit, NATO leaders adopted a new strategic concept to serve as the alliance's road map for the next 10 years. The strategic concept involved an action plan that would make NATO more agile, more capable and more effective against new modern threats and new challenges. It was an inevitable move after former Warsaw Pact member countries of Eastern Europe joined the EU, and NATO's former concept was unable to respond to emerging threats like terrorism. So Turkey's membership in NATO became more important after the adoption of the new strategic concept as a matter of realpolitik and military power because of its geostrategic position. While Turkey today houses tactical nuclear weapons under NATO's nuclear burden-sharing agreement, which provides a bargaining chip to pressure Russia and a deterrent tool against non-state actors in the Middle East, it also agreed to host the X-band radar of NATO's ballistic missile defense system under the action plan, taking the risk of deteriorating relations with its neighbors. The X-band radar, which provides instantaneous data if there is an emergence of a ballistic missile threat to Europe, is a primary asset of the physical infrastructure of NATO's missile defense system due to its sensor capabilities. It is located at the Kürecik radar base in Malatya. Turkey is also one of the key members in the Very High Readiness Joint Task Force (VJTF), which is NATO's spearhead force that was formed following the decision to enhance the NATO Response Force (NRF) in 2014.

So Turkey's membership is crucial to NATO, as it has a vital role in confronting threats from the east and the south, pressuring Russia and protecting Europe, despite the fact that NATO members repeatedly fail to help Turkey when its security is at stake, even though they have a commitment to defend one another against threats. Even worse, they threaten Turkey through the media with expulsion from NATO, which is nonsense. Taking Turkey out of NATO is not that simple. That is why U.S.-led NATO constantly pushes to transform Turkey by carrying out smear campaigns, overlooking terrorist attacks or coup plots instead of dismembering it.

Western media, which voluntarily attacks Turkey, now looks nervous after President Recep Tayyip Erdoğan's visit to St. Petersburg this week. Moscow and Ankara have started to mend ties, which soured after Turkish F-16s shot down a Russian fighter jet in November 2015. The two pilots who played a role in this event were detained over links to the failed July 15 coup attempt. It becomes more possible that the downing of the Russian plane was a plot by Gülenists in the military to target Turkish-Russian relations. Erdoğan bluntly said that Turkey felt let down by its NATO allies, the U.S. and the EU in the wake of the failed Gülenist coup attempt. Today, there is fear in Western capitals as NATO-member Turkey could be drawn closer to Russia than ever before, but to be honest, it is not Turkey's fault.
Last Update: Aug 11, 2016 11:08 am
RELATED TOPICS