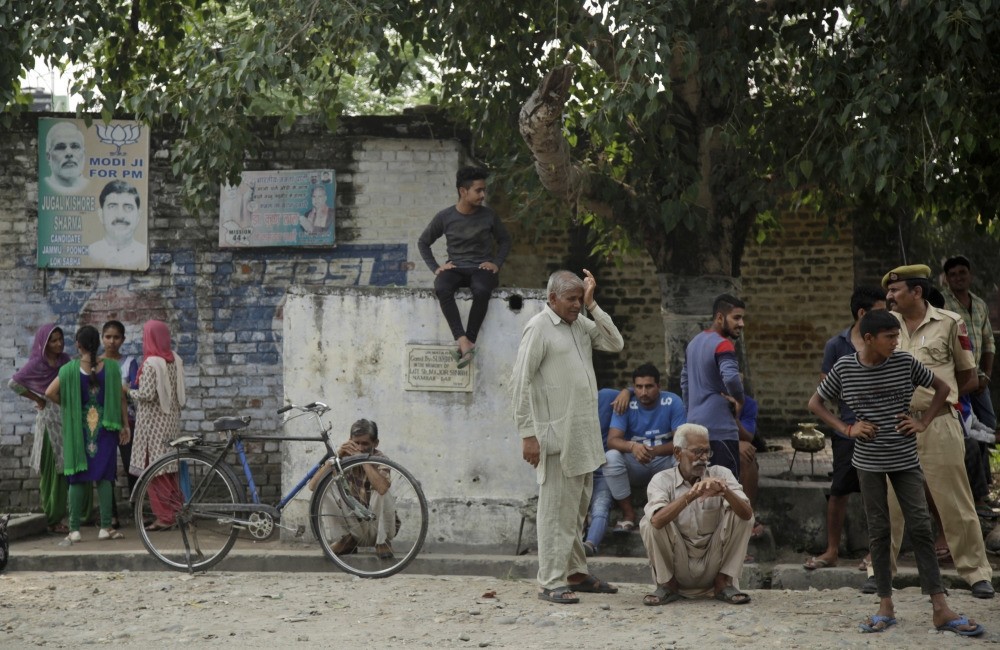 Indians living close to the border with Pakistan waiting for transport to move to safer places after authorities ordered the evacuation of villages near Kashmir, Hamirpur village in Akhnoor, 62 kilometers from Jammu, Sept. 30, 2016.
by Merve Şebnem Oruç Oct 01, 2016 12:00 am

The latest developments have brought Indo-Pakistani relations to their lowest point amid ongoing unrest in Kashmir, where conditions have sharply deteriorated since the summer

Pakistan's prime minister convened an emergency cabinet meeting yesterday amid rising tension in Kashmir. Two Pakistani soldiers were killed during clashes with Indian troops following India's claims of "surgical strikes" along the border of Pakistani-controlled Kashmir. While India said it had conducted attacks in the disputed region to foil a "terrorist attack," it was welcomed by Hindu nationalist supporters of India's Prime Minister Narendra Modi, who think that their country has remained silent against Pakistan for too long. Pakistan, on the other hand, promised a "forceful response" if India's operations are repeated, denying that any incursion had taken place in the territory it controls while accusing India of "deliberately" escalating tensions.

The latest developments have brought Indo-Pakistani relations to their lowest point amid ongoing unrest in Kashmir, where conditions have sharply deteriorated since summer. The death toll in Kashmir has reached 87 since the pellet-riddled body of 11-year-old Nasr Shafi was found after he disappeared in Harwan on Sept. 16 during clashes between Kashmiri protesters and Hindu security forces. The intense clashes in Kashmir haven't ceased since Azad Kashmir-based Hizbul Mujahedeen commander, Burhan Muzaffar Wani, 22, was killed by Indian forces on July 8. After unrest peaked in Kashmir once more after a shaky period in 2010, residents there are faced with curfews declared by India's administration, unheeded by the Kashmiri people, and Hindu authorities are being accused of human rights' violations while 500,000 Indian troops have been sent to the region.

Nawaz Sharif addressed the 71st session of the U.N. General Assembly this month over the latest situation in Kashmir, once again asking the organization for help to stop bloodshed and implement U.N. Security Council (UNSC) resolutions highlighting the atrocities that have already been witnessed by the entire world. He also wrote a letter to the "Big Five," the permanent members of the UNSC, seeking a solution to the conflict. India, in return, accused Pakistan of being a "terrorist state" and supporting terrorist groups in Kashmir but the "azadi" (freedom) slogans of the people of Kashmir from India are getting louder.

Kashmir is caught in a 69-year long conflict, one of the world's longest ongoing conflicts since the painful division of Pakistan and India. Muslims and Hindus in those countries have been fighting over Kashmir since 1947 when the British gave up control of the Indian subcontinent, splitting it into two countries.

The Kashmir crisis was one of the first for the U.N. in 1948 of the post-World War II era and U.N. involvement persisted for 23 years. It has been 68 years since the Kashmir dispute was first brought to debate in the U.N. but a solution has yet to be reached.

U.N. involvement in the region was relatively insignificant from the end of the second Indo-Pak War of 1965 to the third War of 1971, with the United Nations passing 23 resolutions calling for a free and impartial plebiscite under which the Kashmiri people could decide their own future. By 1971, the U.N. was completely out of the picture with India refusing to implement U.N. resolutions on Kashmir and refusing to hold a plebiscite.

It's disappointing to see that India is not the only one closing its doors on any solution but the U.N. seems to be doing the same. The silence of the U.N. and the ineffectiveness of the UNSC is just further evidence of the problematic structure of the organization, which has failed to fulfill its claims to protect global peace as we bear witness to conflict in zones such as Somalia, Cambodia, Srebrenica, Rwanda, and now in Syria. The apathy of the world and non-implementation of UNSC resolutions paved the way for Kashmiris to take up arms opposing India's brutality in 1989 and India subsequently used the tragedy of 9/11 as an opportunity to label the Kashmiri struggle for freedom as a form of terrorism. Sadly, the world bought it. Regardless, the fact that both Pakistan and India are nuclear powers should scare the U.N. enough to compel them to get involved in the Kashmir conflict. The two countries, which have already gone to war three times, now have nuclear weapons to contend with and the subcontinent is heating up again.

The Western powers led by the U.S. have recently grown obsessed with preventing the spread of nuclear weapon programs. Iran was brought to the negotiation table with P5+1 countries after years of suffering under UNSC sanctions, forced to deactivate its uranium-enrichment centrifuges. North Korea is also perceived as a threat to global peace due to its nuclear program. For quite a while the "Big Five" has presented itself as a superhero, an entity that will prevent the spread of nuclear weapons while abandoning their own conflict of interests. However, they turn a blind eye to the Indian subcontinent where tensions are escalating between two long-time foes, both of which rely on ground missiles and warplanes to deliver nuclear warheads.

Some defend the U.N.'s unfair and unjust structure by saying, "The U.N. was founded on principles which are completely against major threats like nuclear war and the U.N. will not deal with civil wars, massacres, genocide or human tragedies," in the face of this criticism. However, the situation in Kashmir and the potential repercussions of the conflict, in terms of a potential nuclear war, are a major threat to world peace which the U.N. is obliged to address. Yet, the U.N. is doing nothing at all. No wonder President Recep Tayyip Erdoğan tirelessly says the structure of the U.N. has to be revised for the sake of the future.
RELATED TOPICS