A night full of terror and victory: July 15 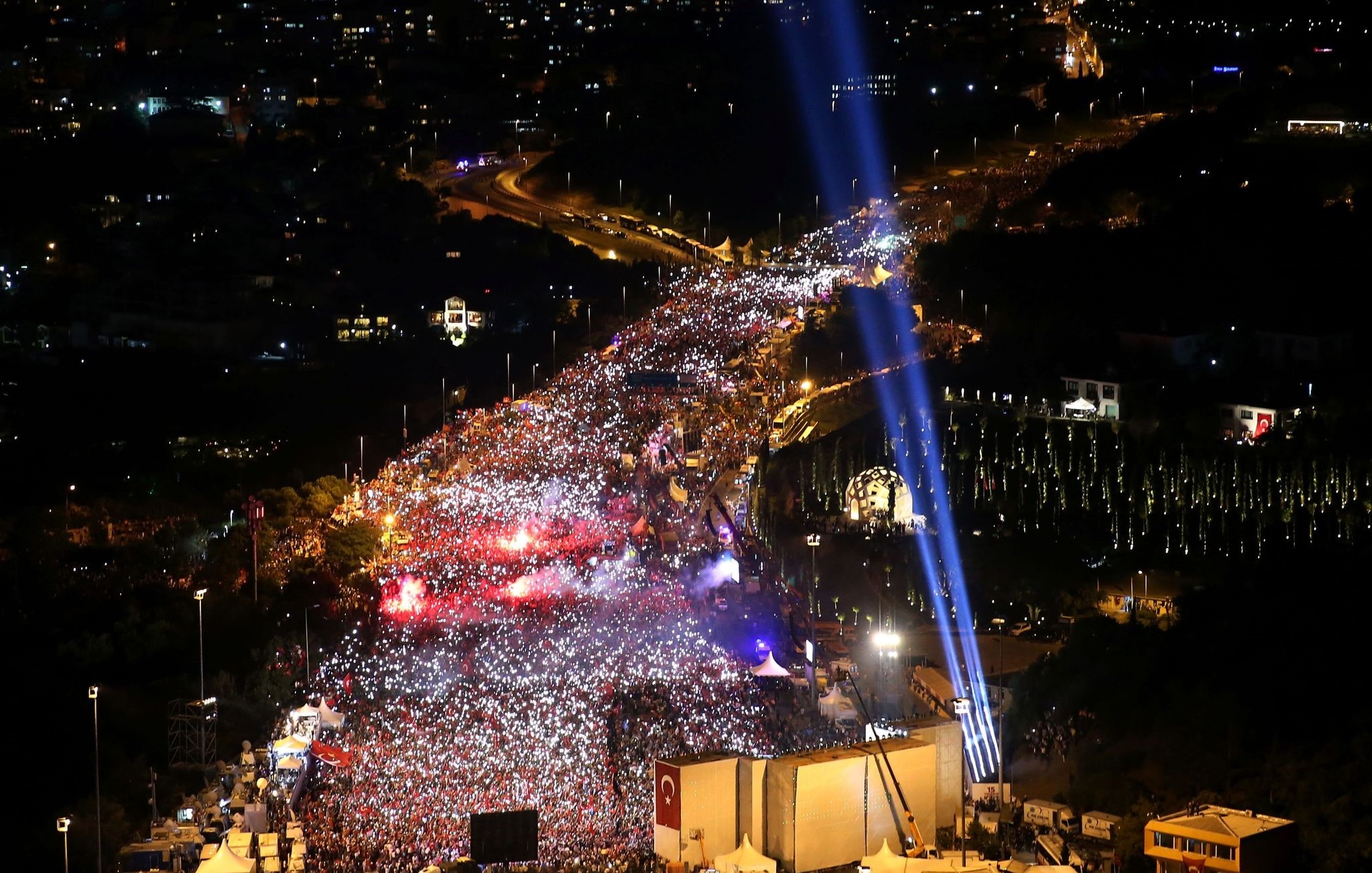 Millions of people wave national flags at the foot of the 'July 15 Martyrs Bridge' to commemorate the first anniversary of the failed coup in Istanbul, July 15.
by Merve Şebnem Oruç Jul 17, 2017 12:00 am

On the night of July 15, Gülenists attempted not just an ordinary coup, but a deadly terrorist putsch, mercilessly killing hundreds of civilians

Saturday, July 15, 2017 marked the anniversary of Turkey's attempted coup. It's been a long and hard year since the horrific night on which 249 people were killed by the Gülenist Terror Group (FETÖ) that infiltrated the Turkish army. It was the best of days, it was the worst of days. It was a terrible and heinous attack, and it was a glorious victory. We mourn for our losses, and we praise our victory.

July 15, 2016 started just like a normal, regular day in Turkey. But the generally calm cities of Turkey, particularly Istanbul, its biggest city, and Ankara its capital, were plunged into chaos when a night full of terror came. It was hard to determine whether this was a massive terror attack or a coup attempt at the beginning. It was worse; it was both.

Turkish society has long suspected that the Gülenists inside the Turkish army had been preparing to stage a coup. But it was based only hearsay. The Gülenists had already tried to overthrow the democratically elected government of Turkey in December 2013, and their public declarations since then had been revealing that something worse was on the horizon. The Turkish state had been fighting a running battle against the Gülenists and trying to cleanse the terrorist elements nested inside the state apparatus for around three years until the attempted coup, however, the intelligence about the Gülenist threat inside the army was too limited.

What the Gülenists tried to do on the night of the attempted coup was to turn the terror attacks that targeted Turkey in 2015-16, into an opportunity. A Gülenist junta group started the plot by spreading a false terror alarm. They were going to take control of the government and the state by benefiting from the panic. It was a thorough plan, which would have succeeded in a short period of time if the Turkish people had not been quick to intervene.

Although the attempt looked as if it was a military coup and staged by the chain-of-command, the Turkish army's Chief of Staff Gen. Hulusi Akar was taken hostage, and the official website of the Turkish army was sabotaged. A pirate statement was announced both on TRT, the state owned radio and TV channel, and the website in question. Introducing themselves as the "Turkish Armed Forces (TSK)," the terrorists said the TSK had completely taken over the administration of the country. Unsurprisingly, the whole world was ready to take the bait, as the global community was not familiar with the facts surrounding the network of Fetullah Gülen, a twisted Islamic preacher who is based in the U.S. and obsessed with the idea of controlling the Turkish state.

The world has known Gülen as an enigmatic Turkish Muslim scholar who has stated in his books that he believes in interfaith dialogue and democracy. His network's public profile has been defined primarily by a global network of schools, universities, dialogue centers and charity organizations. Yet, little is known about the inner workings of their educational structure, which raises the question of how exactly this movement became so powerful. This question was answered in 2013. Apparently, the Gülenists managed to build a parallel state within the Turkish state apparatus. Gülen's followers were often clean-shaven and English-speaking individuals educated in the West, which allowed them to enter the judiciary and police without attracting the attention of the secularist establishment during the 1990s and 2000s. Despite their image of breaking Muslim stereotypes, it was revealed in 2013 that they had set up a huge network within the state, led by outsiders like "judiciary imams" or "police imams," who are members of a big chain within a hierarchy of imams loyal only to their leader, Fetullah Gülen. They systematically stole the questions of the exams by which the state officials have been selected, and gave them to the members of the network who had been trained for the position for years.

The international community was not familiar with the true face of the Gülenists but the Turkish people know who they are. After the pirate announcement was declared on the night of the coup, within seconds, people started to vow on social media: "you will not get away with this," "you have to kill all of them before you succeed," and "the people will not let them take control of Turkey." Within minutes, the Turks were on the streets and in front of the tanks. It was not hundreds; it was not thousands. When President Recep Tayyip Erdoğan was finally able to address the public and call on them to resist the attempted coup, the number of people on the street clashing with the Gülenists increased dramatically. It was millions.

The putschists were loyal to a man living in the U.S., not to the state, or the military of the Republic of Turkey. They can only be labeled Fetullah Gülen's soldiers in the same way that Daesh terrorists see themselves as Baghdadi's soldiers and the PKK terrorists claim to be Abdullah Öcalan's soldiers. That's why, July 15 was not even a standard military coup attempt threatening democracy. What happened in Turkey can only be defined by a new phrase: a "terrorist coup" attempt.For the last couple of years, the world has been witnessing a new type of warfare, which is also a new type of terrorism that includes indiscriminate violence against civilians. Terrorism targets the social and political structures of countries as well as destabilizing their economies. Terror organizations like the PKK and Daesh are playing leading roles in 21st century guerrilla warfare throughout the Middle East, taking advantage of the chaos the region is suffering from. The number of people who believe that terror organizations have been used to change the balance in the region and control their countries is increasing every day. This new warfare inflicts fear and terror while it feeds and breeds terrorists as its soldiers in these areas. The Turkish public sees the nature of last year's failed coup attempt within this context. This is because what really happened that night was, and still is crucial for the future of Turkey and the region since the characteristics of the attempt was quite different from other coup attempts we witnessed in the world, and for that matter, throughout history.