Enmity for US goes up in the world as Trump tweets 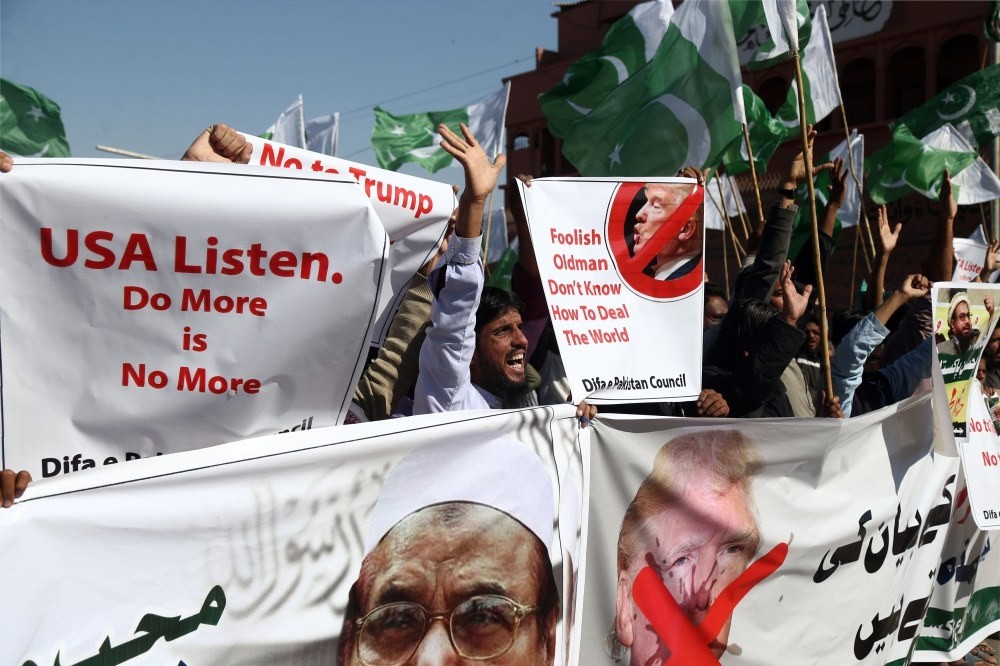 The U.S.'s bullying its allies, recently Pakistan, leads to anti-American sentiment reach a record high around the world

The new year started with protests in Iran. U.S. President Donald Trump's tweet regarding the protests in question has helped the world quickly focus on Iran. It also helped Tehran blame the U.S for the unrest and to say that the protests were a Western supported conspiracy to overthrow the regime. In less than 10 days, the Revolutionary Guards ended the protests in the country. Tehran is probably thanking Trump for the tweet that made things easier for them. While we all were busy with the protests in Iran and asking each other if Washington was really involved, Trump posted another tweet targeting Pakistan. Although this one was overshadowed by the one about Iran, it was more serious.

On Jan. 1, Trump tweeted, "The United States has foolishly given Pakistan more than $33 billion in aid over the last 15 years, and they have given us nothing but lies & deceit, thinking of our leaders as fools. They give safe haven to the terrorists we hunt in Afghanistan, with little help. No more!" And that was not just an idle threat. Three days later, the U.S. State Department announced that it was freezing most of its military aid to Pakistan. The exact amount of funds to be cut off has not been specified yet, but it may include $255 million in Foreign Military Financing and $900 million in the Coalition Support Fund, according to reports.

Unlike many other tweets from the U.S. president, this has garnered support in Washington. U.S. Senator Rand Paul said on Thursday in a tweet, "I'm introducing a bill to end aid to Pakistan in the coming days. My bill will take the money that would have gone to Pakistan and put it in an infrastructure fund to build roads and bridges here at home." In response to Paul, Trump tweeted that ending U.S. assistance to Pakistan would be a "Good idea."

Apparently, with that response, Trump was increasing the pressure and threatening Pakistan that he would be in favor of cutting all aid to Islamabad if Pakistan "does not straighten up and obey Washington's rules with no questioning." Unfortunately, the world has gotten used to the explicit threats from the U.S. administration during Trump's presidency, as it had gotten used to indirect and implicit threats of former administrations.

Recently, Trump also threatened to cut off U.S. aid money to the Palestinian Authority following his and U.S. Ambassador to the U.N. Nikki Haley's threats to the whole world during the U.N.'s voting to reject his recognition of Jerusalem as the capital of Israel.

Trump's harsh tweets towards North Korea and Iran or his decision to recognize Jerusalem as the capital of Israel would help to keep his popularity stable on his base. His tweets targeting Pakistan will probably do the same. But will his bullying actually work on Islamabad? Perhaps not as many in Pakistan seem to be furious over his tweets and his administration's decision. The government summoned the U.S. ambassador in Islamabad, while Pakistanis were on the streets protesting to expel the envoy.

Foreign Minister Khawaja Asif told the U.S. media that the U.S. had turned Islamabad into a "whipping boy" to distract people from its failures in Afghanistan. Asif added, "We don't have any alliance. This is not how allies behave."

Pakistan's National Security Committee, attended by the prime minister and army chief of staff, also issued a statement, and said the U.S. was scapegoating Pakistan for its own failure to bring peace to Afghanistan after 16 years of war. Moreover, on social media, people in Pakistan have been showing their anger expressing that the U.S. president was disrespectful to their country and criticized the U.S.-Pakistan relations. Some say that it is enough; Pakistan won't fight somebody else's war any longer.

As a Turkish citizen, I feel sympathy toward the reactions of the Pakistanis, since I saw how Washington has tried to put the blame of its own failures on Ankara during the civil war in Syria many times in the last couple of years. Having a 822-kilometer-long border with Syria, Turkey has been seriously affected from the bloody conflict devastating its neighbor. Hosting nearly 3 million Syrian refugees, Turkey did not get the promised support from its U.S.-led Western allies.

Making matters worse, Washington attempted to accuse Ankara of supporting terrorists while Turkey was hit again and again by deadly terror attacks from terrorist groups that managed to cross the border and tried to carry the war in Syria onto Turkish soil. Meanwhile, Washington has supported one of the terrorist groups that have been behind those attacks: the Democratic Union Party (PYD), the Syrian offshoot of the outlawed PKK, which is listed as a terrorist organization in the U.S.

Looking at the statistics since 9/11, no one would think the accusations of the U.S. toward Pakistan are fair or right. Let alone the respect that the allies must show to each other, there is no sympathy in Washington for the people who lost their lives. Putting Pakistan in the row of countries hit by the U.S. storm-making policies, I believe the Trump administration will be unable to find the support from the rest of the world, even its NATO allies.

No matter how much the U.S. administration increases the pressure on Pakistan, it will not be able to see Islamabad on his knees. If the U.S. cut its alliance with Pakistan, there will be one and only winner: China. Just like the U.S. pushed Turkey to sit on the table with Russia and Iran to solve the problems in its region, Beijing will come forward with further financial offers and new opportunities of cooperation. As long as Washington keeps bullying its allies to obey its misguided policies, the anti-American sentiment will continue to rise everywhere, and the gap it opens will be filled with rival powers.