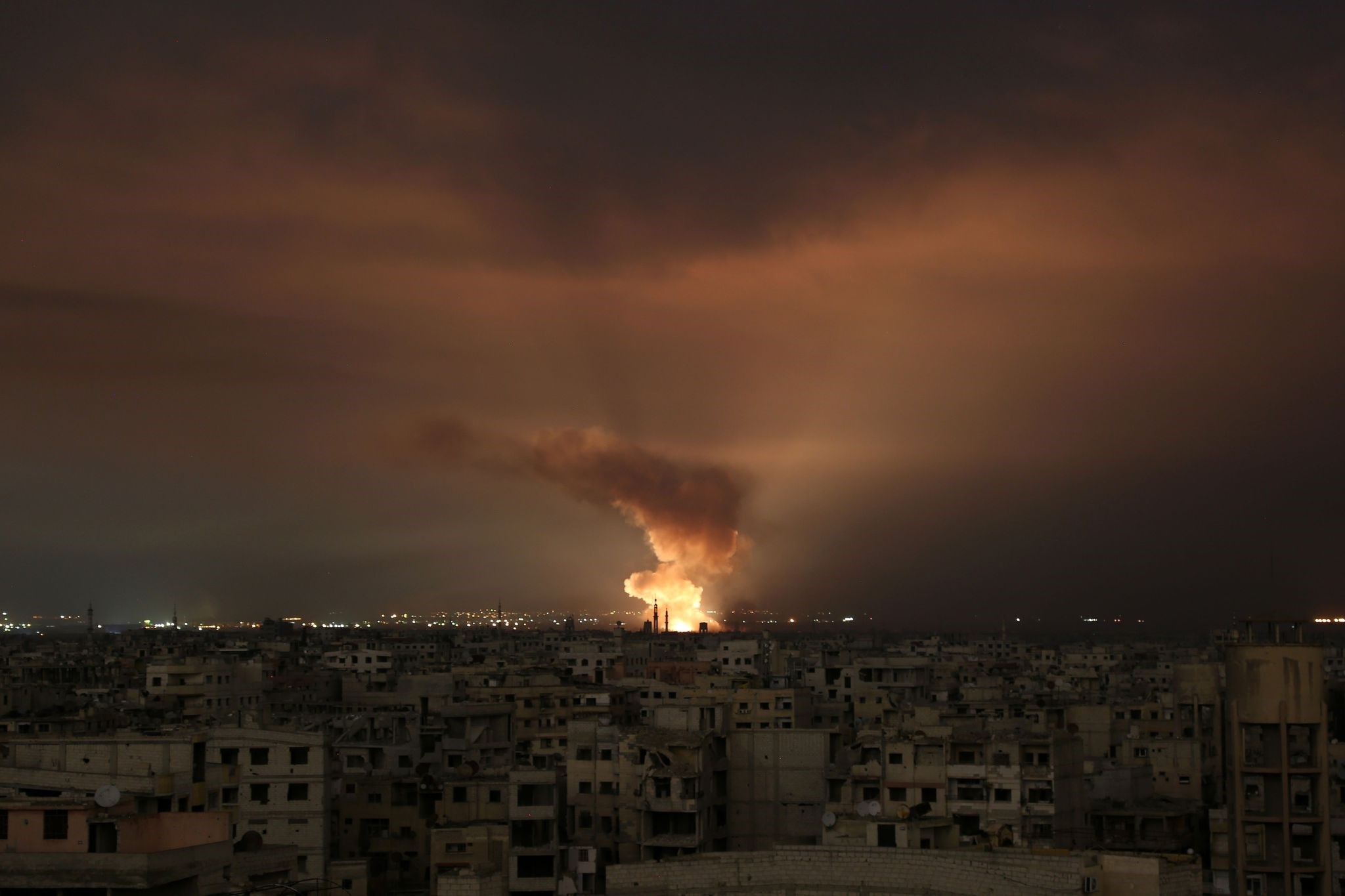 Smoke billows following a regime airstrike on the besieged Eastern Ghouta suburb on the outskirts of Damacus, Syria, Feb. 23.
by Merve Şebnem Oruç Feb 28, 2018 12:00 am

The total number of the civilian deaths was 530 last week, among them over 130 children, with escalating violence in Eastern Ghouta presenting a direct challenge to the authority of the U.N. Security Council

Speaking at the Human Rights Council in Geneva, Switzerland on Monday, U.N. Secretary-General Antonio Guterres called for the immediate implementation of a resolution for a 30-day cease-fire in Syria. Guterres reiterated his thoughts on the dire situation in the last opposition stronghold near the capital, saying, "Eastern Ghouta can't wait, it's high time to stop this hell on earth."

"I remind all parties of their absolute obligation and international humanitarian and human rights law to protect civilians and civilian infrastructure at all times. Similarly, efforts to combat 'terrorism' do not supersede these obligations," he added.

Last week, the U.N. Security Council was supposed to vote on a draft resolution demanding a 30-day truce in Syria to allow aid delivery, medical assistance and the evacuation of the wounded. However, members of the UNSC could not come close to voting. The council finally voted unanimously for a cease-fire on Saturday after days of intense and rough debates. Drafting and voting a draft resolution in the UNSC is always a challenge but the implementation of the resolutions is a much bigger one.

Russian Foreign Minister Sergei Lavrov said the truce would begin only when all sides agreed on how to implement it. The adopted resolution called for the cease-fire to begin "without delay" but did not set a specific timeframe, following Russia's objections. It also did not say how the cease-fire in question would be enforced, how the injured would be safely evacuated, and how the aid workers would be protected. The reports on late Monday stated that Russian President Vladimir Putin ordered for a daily humanitarian truce in Eastern Ghouta yesterday. This could hint that Russia has not given the green light to a 30-day ceasefire just yet.Meanwhile, the Damascus regime has kept saying that they fight against "terrorism" and that they would continue regardless, denying targeting civilians while Iran, a long-time supporter of Bashar Assad, has said they both respected the resolution but insisted the cease-fire did not apply in some of Damascus's suburbs, which includes Eastern Ghouta. Eastern Ghouta was also supposed to be one of the de-escalation zones in Syria, which Russia, Turkey and Iran agreed to set up during the sixth round of talks in the Kazakh capital, Astana.

According to recent U.N. estimates, around 393,000 civilians are trapped in Eastern Ghouta, which is under the regime's siege and approximately 272,500 inhabitants are in need of humanitarian assistance. About a third of the Damascus suburbs are internally displaced, including people who have fled from Damascus. And yet, these figures are uncertain as we witnessed that the numbers were much higher in the other regime-besieged areas in the past. The reports reveal that at least 20 civilians were killed in regime's air and artillery attacks on Sunday and there were renewed bombardments in areas including Douma, the main town in the Eastern Ghouta, and Harasta on Sunday, which mean that the UNSC resolution did not change anything on the ground so far. Also, there were reports claiming that the symptoms of deadly chlorine gas were seen on suffocating victims, one of which was a 3-year-old Syrian child.

A total number of the civilian deaths was 530 last week, among them over 130 children. That's why the escalating violence in Eastern Ghouta presented a direct challenge to the authority of the Security Council. However if the adopted resolution cannot be implemented it will once again show the inefficiency and uselessness of the U.N. apparatus.

The tragedy in the suburbs of Damascus is the latest example of the regime's violence against the Syrian people. We lost count of the number of areas that have gone through the same hell. The violence in Eastern Ghouta is not new. Anti-Assad insurgents have been besieged by the Syrian army on the outskirts of Damascus since spring 2013. A team of U.N. chemical weapons inspectors confirmed that the nerve agent sarin was used in an attack in Eastern Ghouta on the morning of Aug. 21, 2013, and killed around 1,300 civilians. Then-U.N. Secretary General Ban Ki-moon told the UNSC that he believed the attack constituted a war crime. A U.N. report detailed the "most significant confirmed use of chemical weapons against civilians since Saddam Hussein used them in Halabja in 1988." The following U.N. reports and findings further revealed the Assad regime conducted the attack, and was responsible for dozens more.

The UNSC did nothing then. The Assad regime crossed the 'red lines' of former U.S. President Barack Obama, but the U.S. did nothing as well. The U.S. Ambassador to the U.N., Nikki Haley, says today that the U.N. must end barbaric attacks in Eastern Ghouta, accusing Russia again and again. But that reminds us how the U.S. reached an agreement with Russia to destroy chemical weapons in Syria in Sept. 2013, shaking hands on the deal. The chemicals inside Syria are far from being destroyed; in fact, fresh reports suggest that the Assad regime is working on producing new chemical weapons. The permanent members of the UNSC keep putting the blame on each other with regards to the humanitarian crisis in Syria but looks like they will not give up "the new Cold War," which is being played out on the ground of war-torn country. The resolutions that failed to be implemented, and the drafts that were not adopted during the seven-year long civil war made the UNSC more unreliable in the eyes of world, and it looks like the permanent members of the Security Council will continue to lose their credibility until the bloody war comes to an end.