Roger Waters: Another star falls from grace due to Syrian civil war 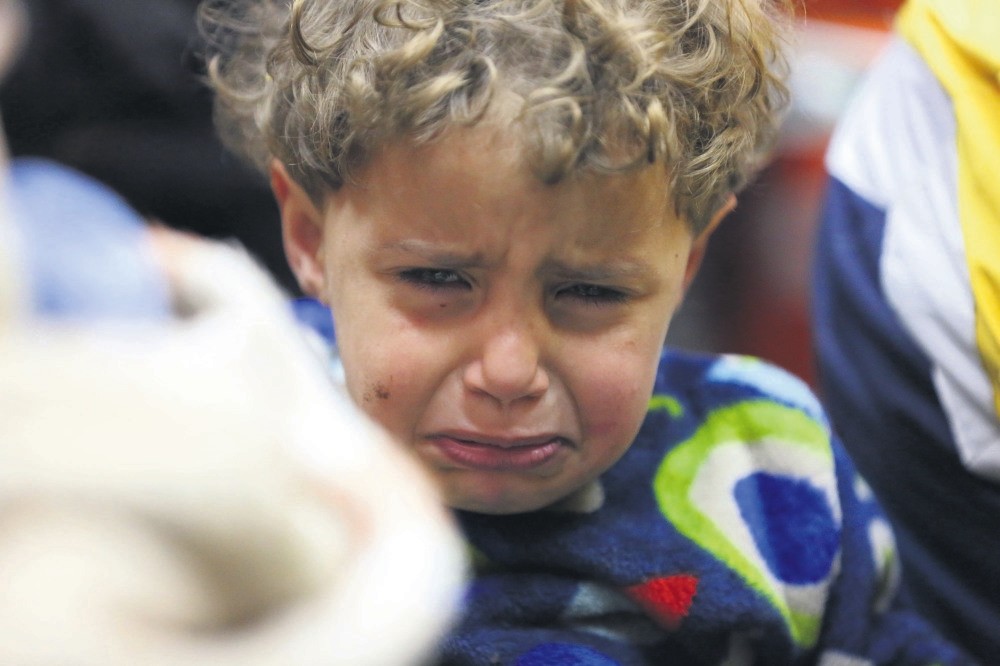 He was the front man of one of the best rock 'n' roll groups of all time. Some of his songs are considered the greatest in the history of rock. When he toured "The Wall Live" from 2010 to 2013, he played to over 4 million fans – the largest tour for a solo artist.

He stole our hearts when he dared to speak out against Israel. He traveled to the West Bank, talked to Palestinians in the occupied territories and sprayed the famous lyrics of "Another Brick in the Wall" – "We don't need your thought control" – on the Israeli-Palestinian security barrier in Bethlehem in 2006. We loved him so much because he is one of a few Westerner musicians who defend Palestinian rights.However, former Pink Floyd singer and bassist Roger Waters disappointed us this time. Echoing Bashar Assad's propaganda, he implied that Syria's White Helmets had staged a recent chemical attack that prompted U.S.-led missile strikes on Syrian regime targets. Waters made the accusation during a gig Friday in Barcelona where he called the volunteer first responders a "fake organization" that created propaganda for "jihadists and terrorists." He then claimed that by listening to propaganda from the White Helmets and others "we would be encouraged to encourage our governments to go and start dropping bombs on people in Syria."

Well, someone has already been dropping bombs on Syrian people, but Waters either does not know, or does not care. It is sad to see someone who advocates for peace and justice for Palestinians show himself to be profoundly ignorant of what has happened in Syria for seven years. I completely share his deep feelings of distrust for Western governments, but it is disappointing to see that his conception of Western policies on the Middle East makes him blind to the crimes of dictators like Assad, the butcher of Syria.

The White Helmets, also known as the Syrian Civil Defence, which were nominated for a Nobel Prize in 2017, have saved over 80,000 lives since 2012. It was established after the regime's air force started dropping bombs on Syrian civilians. Many of them have been killed by the regime while they were trying to save lives.

I am not sure if this will mean anything to Waters. If he would have gone to the Syrian border and seen the tragedy of actual people or talked to some of the millions of Syrian refugees who had to flee from their country, he would have understood that there are, unsurprisingly, some people who hold power in their hands for decades in the Middle East and they are not nice to their people. Of course, Western power had been involved in imperialism and, in different ways, still are. However, Western countries are not the only one to not care about people's lives. People in the Middle East do not have to be squeezed between butchers like Assad who kill, bomb and torture hundreds of thousands of their own people and Westerners who use innocent people's tragedy for their own benefit. Ordinary people in the Middle East should not be silenced by notorious terrorist organizations like Daesh, which found an opportunity to rise and spread amid the chaos that brutal regimes initiated in the first place.

Western countries have a habit to intervene or not in atrocities in undeveloped countries in line with their interests. They use democracy, human rights and freedom in their declarations many times, but what they bring to those countries has always been more oppression, violence and death. They invaded Iraq in 2003, and today it is a heart-breaking mess. What they did to Syria has been the same, but they caused it by just watching and not intervening. We know that the chemical weapons the Assad regime uses are a threat to Israel, so the U.S. decided to strike the regime's stockpiles and manufacturing facilities – the innocent people, mostly women, children and infants who suffocated and choked were not important to them. If not, they would have stopped Assad years ago when he started to use chemical weapons on his people.

Unfortunately, people like Waters who have the power to touch the hearts of millions with their words have also abandoned those victims since their murderers are bloody dictators who call themselves anti-imperialists, not Western imperialists or Zionists. A news flash for Waters – there is not one, single costume that fits all for being a human rights defender in the Middle East.

If you stand only against Western crimes and just see the conflicts in terms of Israel's security, you become a slave to the geopolitical discourse. If you neglect to see millions of Muslims who have been oppressed under the dictatorship of a cruel family, losing your sight with the rise of terrorist groups like Daesh, then you are fooled by cultural discourse, which is basically a vicious cycle repeating Islam, Islamists, terrorism and Islamophobia. If you cannot get rid of all the effects of mainstream propaganda the media pumps out and clear your mind to listen to your conscience, you miss seeing the massive human rights issues like millions of refugees, detainees, torture victims, rapes, food and aid needs, hunger as a weapon of war and many others.

The Western right has no problem with all above, but what about the left? Does the left in the West only care about human rights, freedom and equality when it comes to fighting against Western imperialism? Unfortunately, yes. The left in the West has fallen into the traps dug by the Assad regime and its backers due to their bias, deep-rooted rituals of thinking and little knowledge about Syrians, their former lives or the history of their local struggles.

Sadly, the Palestinian cause has paradoxically played a negative role in the left's hostility to Syrians. According to their assumption, Syria is against Israel, which occupied the Golan Heights, so if Syria is against Israel, it is against Zionism and imperialism and with Palestine. They have not even bothered to take a look at what Assad did to the Yarmouk Palestinian refugee camp for years. They always remember the Sabra and Shatilla massacres in Lebanon following the Israeli invasion of Lebanon, but they do not even know what Hafez Assad did to Palestinian refugees in camps like Tal al-Zaatar with a Lebanese militia called Amal during the first half of Lebanese Civil War. They killed hundreds and starved them to death for weeks.

For years, Syrians have been trying to survive under a monstrous campaign of annihilation just like Palestinians, but even the defenders of the Palestinian cause have abandoned them because they just cannot look outside the windows of their ivory anti-imperialist towers. If Waters were sincere when he sang: "We don't need your thought control," then he should take off his blinders, break his chains, leave his tidy and cozy anti-imperialist castle for once and visit our complicated real world where both imperialists and so-called anti-imperialists kill innocent people in cold blood. We would be glad to show him around.