The making of Egypt's 2013 military coup 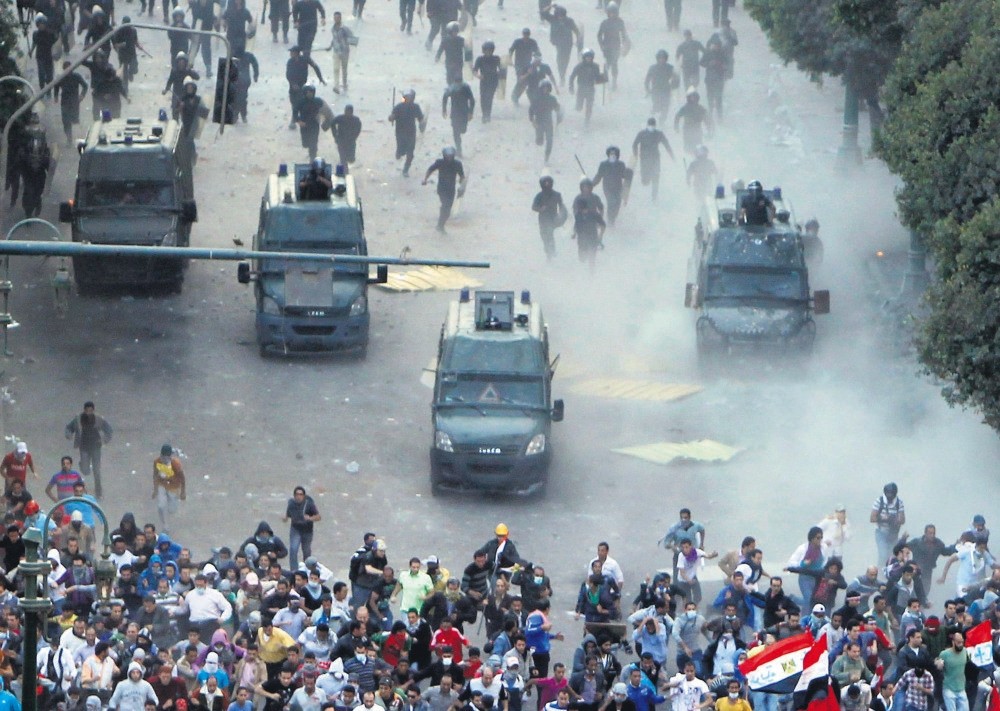 Protesters run from riot police during a demonstration against the junta regime in their country, at Tahrir square, Cairo, Nov. 23, 2012.
by Merve Şebnem Oruç
Jul 07, 2018 12:00 am

It's been five years since Egypt's Gen. Abdel-Fattah el-Sissi (now President), announced on state television the suspension of the country's recently-passed constitution and the removal of Egypt's first democratically elected president, Mohamed Morsi, from office. Morsi had been in office for just over a year when el-Sissi overthrew his government and seized power.

A week before the coup, on June 23, 2013, el-Sissi, who had been appointed by Morsi himself as the head of the armed forces and defense ministry, gave a speech. He warned the Egyptian government that the army might have to intervene due to the countrywide anti-government protests. "We will not accept that Egypt enters a dark tunnel of conflict, internal strife, civil war or collapse of the state institutions." A day earlier, a few hundred protesters had marched on the defense ministry, calling on the army to seize power from Morsi.

It had all started with Tamarod, a group which was depicted by the media as a new grassroots movement, whose name means "revolt" in Arabic. In late June, the group claimed that it collected more than 22 million signatures for a petition demanding Morsi to step down.

The Muslim Brotherhood's Freedom and Justice Party (FJP) dismissed the claim, saying Tamarod had only collected 170,000. Massive demonstrations including the anti-government and counter-Tamarod protests in Egypt's capital Cairo and other cities followed. Rejecting any offers or dialogue with Morsi, Tamarod gave the president an ultimatum to resign or face a campaign of "complete civil disobedience." They urged the "state institutions including the army, the police and the judiciary, to clearly side with the popular will as represented by the crowds."The group was founded in late April 2013, by members of the Egyptian Movement for Change – better known by its slogan Kefaya (Enough). It had joined in the mass protests that forced Hosni Mubarak to resign in 2011 but hadn't played a prominent role. Tamarod became quickly popular in the eyes of the international mainstream media. The founders of the movement became instant celebrities and were on live TV almost every night, complaining about Morsi and his government. Opposition parties in Egypt also backed the campaign.

However, a long series of leaked audio recordings that appeared to capture meetings and phone calls between Egypt's senior defense officials revealed in 2015 that the United Arab Emirates had given money to the Egyptian Defense Ministry to foment a protest campaign against Morsi.

Accordingly, Tamarod leadership was drawing on a bank account administered by Egypt's generals and replenished by the UAE. As el-Sissi's junta quickly started to discredit and threaten Tamarod after the coup, some of the founders of the group finally admitted in 2015 that they were taking orders from the army. Moheb Doss, one of the founders of the group, said in an interview, "What they did, they did in our names because we let them. The leaders of Tamarod let themselves be directed by others. They took orders from others."

When crowds took to the streets on June 30, 2013, calling for Morsi to step down, Egypt's military and police were quick to proclaim that between 14 and 30 million Egyptians were protesting against Morsi. These numbers, which represent between 25 and 50 percent of Egypt's adult population, were simply impossible; but the international mainstream media was quick to catch up on those figures without question. Many crowd-sourced data analysts estimated no more than 200,000 protesters in and around Tahrir Square on June 30, but no one listened. This was still a massive protest, but it was only a fraction of the total number of votes Morsi got in the ballots.

Despite el-Sissi's warning on TV a week ago, Morsi and his advisers were shocked to see the ultimatum issued by the army on July 1. They were naive and never thought of the possibility of a military coup after the first democratic elections in Egypt.

On July 3, el-Sissi announced Morsi's overthrow on state TV, along with the suspension of the constitution and the appointment of an interim government, saying the military was responding to the people who had poured on to the streets on June 30. He promised that he would not become involved in Egyptian politics after a military takeover.

Next year, on June 8, 2014, he was sworn in as the country's 17th president. The result of the presidential election was not a surprise given what el-Sissi had already displayed over the next eleven months after the coup. He proved he was the new tyrant of Egypt and had no intention of leaving his position for a long time. He won 97 percent of the votes in the election that witnessed numerous empty ballot boxes, despite threats of a large fine to non-voters and extending polling days. According to official figures, the turnout was around 47.5 percent, but many critics claimed that even that figure was inflated.

This year in March, el-Sissi won the presidential elections for the second time, again with 97 percent of the votes. Voter turnout was at 41.5 percent, lower than that in 2014. The only other candidate was Mousa Mostafa Mousa, who was publicly known to be a strong supporter of el-Sissi.

Other than not being involved in Egypt's politics, el-Sissi had also promised freedom of speech, freedom of the press, democracy and social equality after the coup. He did not deliver on any of those promises either. He had portrayed himself as the savior of Egypt and promised that he would restore security, stability and improve the lives of the people of Egypt. But none of those proclamations came true either.

Instead, thousands were killed. Tens of thousands, including journalists, were detained and arrested while hundreds were sentenced to death in five-minute trials. Morsi, as well as the other leaders of the Muslim Brotherhood, were among those who were given death penalties.

As part of a revenge plan of Egypt's old guard, the Muslim Brotherhood was crushed and banned. Public protests were restricted. Arguing against the coup or post-coup policies in the media was equated with disloyalty and treason. And five years after the military coup, Egypt is still suffering from insecurity, instability, lack of democracy and a poor economy.