Israel's occupation and Assad's crimes: Do we have to choose one? 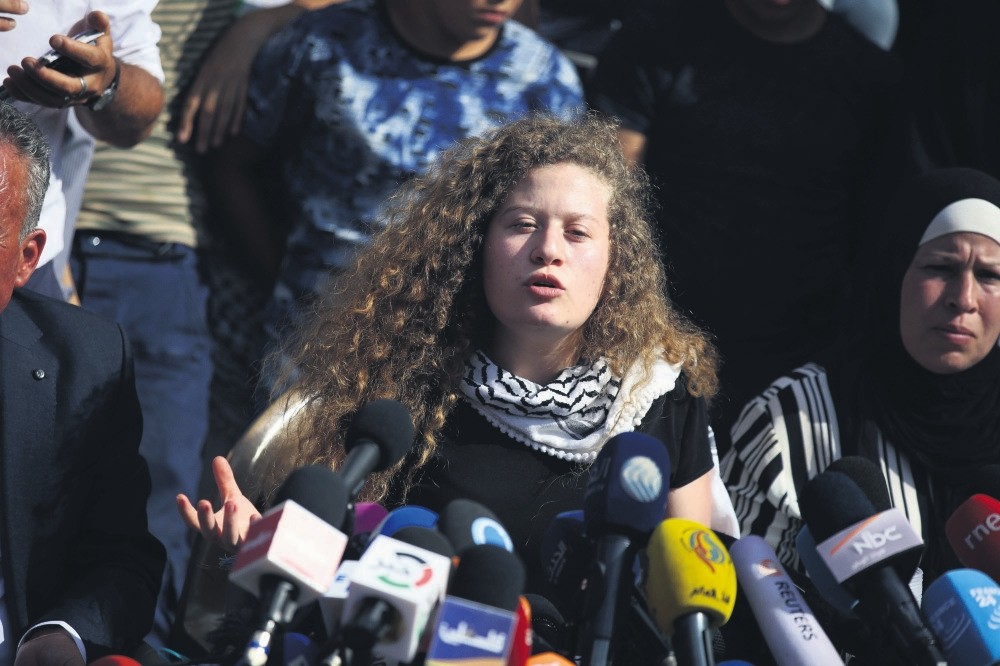 Ahed Tamimi speaks at a news conference after being released from an Israeli prison. The 17-year-old Palestinian girl was arrested for slapping an Israeli soldier during an attack on her family and home by soldiers, July 29.
by Merve Şebnem Oruç Aug 02, 2018 12:00 am

To stand up and speak out for the rights of Ahed Tamimi and others like her, whether they are living in Palestine or Syria, may seem challenging but it is not impossible

Ahed Tamimi, a Palestinian teenager who was filmed slapping an Israeli soldier outside her home in Nabi Saleh in the occupied West Bank was freed after eight months in jail. The 17-year-old girl has become a symbol of resistance to the Israeli occupation and the Palestinian cause all around world after her heroic action. The posters of Ahed with her blue eyes and golden hair were in the hands of people from Washington to London. "Free Ahed – the real wonder woman" signs were held up; her images were spray painted on the Israeli-West Bank separation barrier which is another symbol of Israel's persecution, racial segregation and apartheid. After her release, President Recep Tayyip Erdoğan called Ahed Tamimi to congratulate her and lauded her bravery and determination against the Israeli occupation.

When she was 11, another video of hers went viral where she is shown raising her fist at an Israeli soldier in 2012, her action earned her the Hanzala Courage Award from Turkey and a meeting with President Erdoğan.

What Ahed Tamimi did, again and again, was an act of courage and determination against the occupation. Her father and a mother suffered one of the most difficult waiting periods in their lives; they prayed every day for their daughter's release for months.But I saw something confusing, while I was tracking "who wrote what" about Ahed's release. Some Arab social media users have shared her father's social media posts making fun of Syrian opposition fighters and activists fighting against the Assad regime. According to the screenshots and the quotes, Bassem Tamimi was claiming that the Syrian regime's chemical attacks, during which thousands of people including children were painfully killed, were staged by anti-Assad groups. He was describing the Syrian people's resistance against the Assad regime as a "Mughal Invasion," clearly showing that he was ignoring the killings of hundreds of thousands people by the Assad regime's bombings, torture and snipers, and he was a sympathizer of Bashar Assad. Trying to convince myself that what was said about the father was fake, I wanted to check and see it with my own eyes. Unfortunately, they all were true.

Probably, you ask to yourself, "How can someone bravely resist against one brutal regime and be blind to another's atrocities?" Well, I was disappointed, of course, but not surprised as Bassem Tamimi was not the first to be unable to say "no" to the bloody dictatorship of the Assad regime while he and his family boldly stand up against Israel's occupation.

Roger Waters, one of the biggest rock musicians of all time, who has advocated for the Palestinian cause for years and stole our hearts when he dared to speak out against Israel, has been attacking the White Helmets, also known as the Syrian Civil Defense, the volunteer first responders on the battleground in Syria that saved over 80,000 lives since 2012, and alleging that they are a fake organisation that created propaganda for "jihadists and terrorists."

Leila Khaled, who has been an icon of the Palestinian resistance struggle since late 1960s, has been speaking out against the Syrian opposition for years. Not only that but also she is standing up for the Syrian army and whitewashing Assad's crimes.

We are already aware that the Palestinian cause has paradoxically played a negative role in the hostility of the leftists in the West towards Syrians. According to the assumptions of anti-imperialist and anti-Zionist Westerners, Syria is against Israel, which occupied the Golan Heights, so if Syria is against Israel, it is against Zionism and imperialism and with Palestine. Sadly the leftist Westerners have fallen into the traps dug by the Assad regime and its backers due to their bias, deep-rooted rituals of thinking and little knowledge about Syrians, their former lives or the history of their local struggles. But why are some Palestinians making the same mistake?

Isn't more than half the population of a country, more than 11 million, worthy of sympathy? It is hard to see that Daesh and al-Qaeda-linked terror was like a gift to the Assad regime and that Damascus used terrorist groups to try to convince the world that the best option for Syrians was to kneel down in front of him. If the Syrian people's suffering does not count, one can look at what Assad did to the Palestinians in Yarmouk refugee camp, where many starved to death, since the start of the Syrian civil war. More than 500 Palestinian refugees were tortured and killed in the prisons of the Assad regime, according to reports. Those were all documented, photographed and confirmed by official authorities. Even today, more than 1600 Palestinians, including over 100 teenagers, are still waiting for their fate in those prisons.

Why can't someone just say "no" to both? In fact President Erdoğan, who has been supporting Ahed Tamimi for years, is also standing up and speaking out for the rights and lives of the Syrian people. He has been doing this for years. When we look at what he has been facing, we know that it is difficult – but clearly it is not impossible.