Is the UN's Khashoggi probe welcomed in Riyadh, Washington? 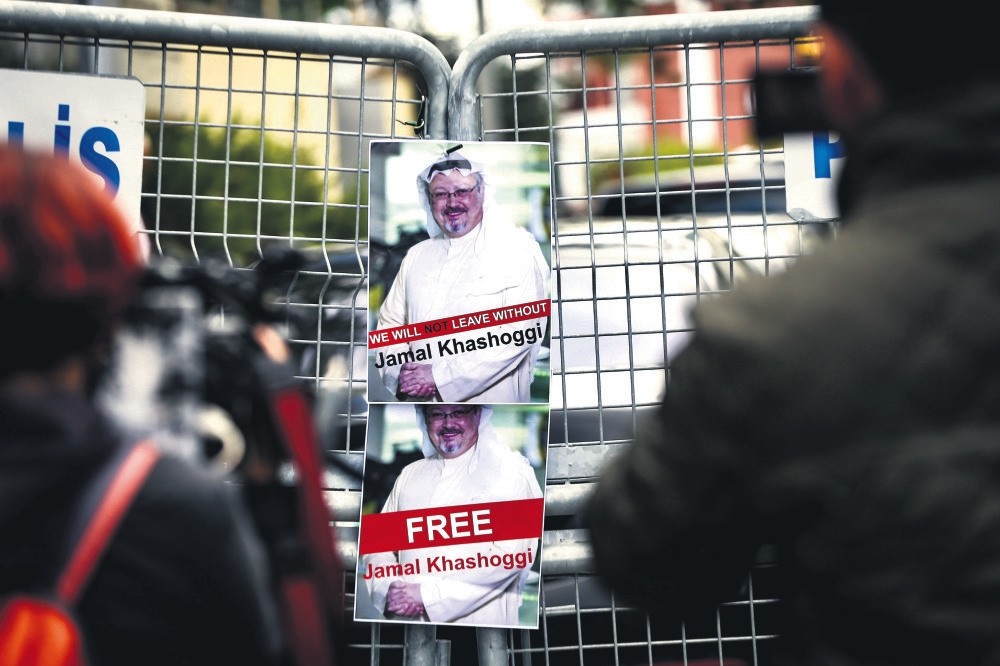 Pictures of slain Saudi journalist Jamal Khashoggi are seen on a fence set up by police in front of the Saudi Consulate in Istanbul during a demonstration, Oct. 14, 2018.
by Merve Şebnem Oruç Feb 07, 2019 12:06 am

The U.N. investigators carrying out a probe into the murder of self-exiled Saudi journalist Jamal Khashoggi were in Istanbul for a week at the end of January. Agnes Callamard, the French academic and the U.N. special rapporteur on extrajudicial killings, has been leading the investigation. Helena Kennedy, a top British lawyer and member of the House of Lords, and Duarte Nuno Vieira, a forensic scientist and professor at Portugal's University of Coimbra, joined her in Turkey.

The team first met Foreign Minister Mevlüt Çavuşoğlu, and then Istanbul's Chief Public Prosecutor İrfan Fidan. However, Callamard was unable to get a reply from the Saudi authorities over her request to enter the Saudi Consulate in Istanbul. As we recall, it had taken days for the Saudi authorities to allow the Turkish police to search the consulate after Khashoggi entered the consulate and vanished on October 2, 2018.

On Oct. 16, a Turkish team of crime scene investigators finally entered the building to conduct a search over the disappearance of Jamal Khashoggi. Just a day before that, in front of all the cameras, a cleaning team entered the consulate carrying trash bags, bottles of bleach, etc. We still don't know if they were household cleaning materials, or other chemicals, which would be used to wipe off the evidences of a crime. And again, the Saudi authorities hadn't allowed a Turkish forensic team to enter the Saudi Consul General's residence for days after he left Istanbul and flew to Riyadh.

Likewise, Callamard and her team waited for a long time for permission from Saudi officials to enter the consulate. "We are respectfully calling on the authorities to give us access at some stage," she said during her week-long visit to Turkey. She was just able to see the vicinity of the consulate, however she left Turkey without entering the premises. Callamard told to the media that the Saudis said the U.N. team's request to enter the building had come "quite late" and that as a result "they need a bit more time to process the request." Who knows how many days it would take to process such a simple request and it is still a question mark as to if they will let U.N. experts enter the consulate. After all, the U.N. team is just a flight away from Istanbul.

The U.N. team said they also want to visit Saudi Arabia as part of their investigation. However, I am not sure if Callamard and her team will find anything credible in Riyadh, after their disappointment with the Saudi authorities' unwillingness to cooperate with regards to the Saudi consulate in Istanbul. The consulate where Riyadh finally admitted that Khashoggi was killed inside, after days of denial, putting the blame on some "rouge killers." Of course, the U.N. team will be welcomed with the plastic and smiling faces of the Saudis, but will they get the answers they are seeking?

The next step in U.N. investigation

So what's next for the U.N. probe, which was launched after Callamard's own initiative, according to reports, after the invitation of Ankara? Turkish authorities are understood to have allowed her to listen to the audio recordings of Khashoggi's murder, which were previously shared with CIA director Gina Haspel, as well as Germany, France and Britain. Those audio recordings were the first pieces of evidence that allowed Turkey to quickly conclude that it was a planned murder, despite Riyadh's claims that Khashoggi was killed accidentally. Well, Riyadh found no place to hide and had to accept that it was a premeditated murder.

While Turkey has opened every door for Callamard, Riyadh has shown that the Saudis are not willing to cooperate and wish to hush up the matter. They did the same with Turkey until now. All the Saudis had done until now has been to get information from Turkey and not share anything they have.

U.S. President Donald Trump, in the meantime, had seemed to be irresolute for a while after massive public pressure; however, he finally issued an extraordinary statement, which began with the words "The world is a very dangerous place!" and continues with how much the U.S. needed Saudi Arabia mostly because of monetary issues, and shows his support to Riyadh repeating the claims of the Saudis that the dissident journalist Khashoggi was "the enemy of the state."

As we know from the reports that the U.S. intelligence agencies concluded that Saudi Arabia's de facto ruler Crown Prince Mohammed bin Salman (MBS) ordered the assassination of Khashoggi, whose body was reportedly dismembered with no sign of it to be found yet. Even though, when he was asked about the possible role of the crown prince, Trump said, "He's running things and so if anybody were going to be informed, it would be him," at the end of the day, he chose to stand by MBS.

Erdoğan's position in the case

President Recep Tayyip Erdoğan, on the other hand, neither mentioned the name of the crown prince nor made a reference to him until now, and yet, he posed really tough questions for the de facto ruler of Saudi Arabia, MBS, and basically pointed his finger at him. Erdoğan also kept stressing his belief that King Salman was sincere and cooperating with the inquiry, but also put more pressure on the Saudi king to take the wheel and do more. It looks like his demands have not been answered by the king yet.

On Sunday during a televised interview, Erdoğan once again talked about the horrific killing of Khashoggi saying, "The murder is not an ordinary one." He also accused the U.S. of maintaining a silence on the murder. "I cannot understand America's silence… We want everything to be clarified because there is an atrocity, there is a murder," he said.

Now we all hope that Callamard's report would lay a crucial foundation to bring those responsible for the brutal murder to account and any officials behind the killings. But we are also suspicious that she may get threats from world powers, or be asked to take a step back by powerful people who do not want to open that box, if she would dare to name the plotters.

Now we know that Ankara has shown its eagerness in revealing the truth behind the murder of Khashoggi, but Riyadh just wants to sweep the dirt under the carpet, the next question is what will U.S. officials do? Will they share their intelligence reports on the killing of Khashoggi with U.N. experts or drag their feet?

The investigation process will probably take no less than six months; and according to Callamard, the 47 members of the U.N.'s human rights body will discuss her recommendations after her report. The members could either ignore the rapporteur's findings or take the issue up to the next level in the U.N. system, which is to the U.N. Secretary-General Antonio Guterres and the U.N. Security Council. There is still a long way to go, but we can all probably figure out that the U.S. would veto any probe, inquiry or any further step with regards to Callamard's findings if it involves some VIPs in Riyadh. But first, let's go step by step and see if the U.S. intelligence will share the evidence they have with regards to the horrific murder of Jamal Khashoggi.