Putin's endgame in Syria is close at hand 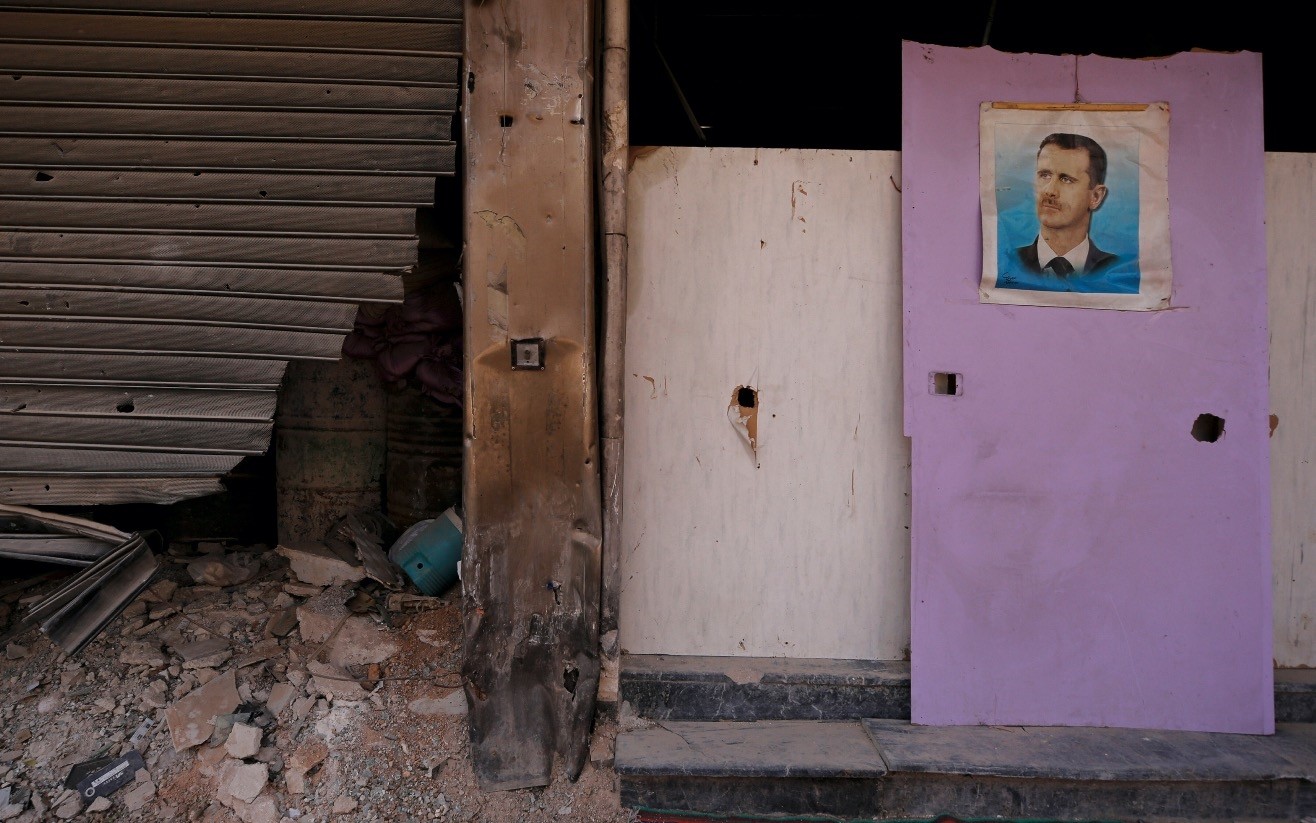 Russian President Vladimir Putin hosted a trilateral summit with his Turkish and Iranian counterparts, Recep Tayyip Erdoğan and Hassan Rouhani, in the Russian Black Sea city of Sochi last week. The three leaders focused on the long-term settlement of the eight-year-long crisis in Syria, but they also held individual meetings. The summit was the fourth of its kind since Erdoğan, Putin and Rouhani first met in Sochi in 2017, following the cease-fire brokered in December 2016 by Russia and Iran, when the three guarantor countries decided to set up de-escalation zones in the devastated country.

All three leaders agreed during the summit that a U.S. withdrawal from northeastern Syria "would be a positive step that would help stabilize the situation in this region, where ultimately the legitimate government should re-establish control," as Putin said in the joint conference after the meetings.

However, no big changes have been seen so far that would point to a U.S. pullout from Syria after U.S. President Donald Trump's announcement in December, according to Putin.

As for Rouhani, the U.S. presence in Syria and other countries was not useful. "America should reconsider its Middle East policy," he said in the press conference. Erdoğan reiterated that Syria's territorial integrity cannot be guaranteed as long as the U.S.-backed Democratic Union Party (PYD), which is the Syrian offshoot of the outlawed PKK, remains in northern Syria. Before he headed to the Sochi summit, Erdoğan also said that Ankara wants a permanent solution in Syria and to coordinate with Russia to establish a "safe zone" in the area.

Furthermore, it is very clear that the trio has different approaches as to who will fill the void in northern Syria after the U.S. withdrawal – if it happens. The same thing was discussed between Presidents Erdoğan and Putin in Moscow last month. Many in Russia, Turkey and all around the world might think that Putin is now urging Erdoğan to directly contact Bashar Assad.

Some in Russia also said Turkey had no right to create a "safe zone" inside Syria unless it sought and received the consent of Bashar Assad, like Maria Zakharova, a Russian foreign ministry spokeswoman. However, Putin didn't utter the name of Assad either in Sochi last week or during the press conference in Moscow. He preferred to use words such as "Syrian Republic" or "Syria" instead of "Assad."

For Iran, of course, Assad himself should be the first person addressed by Ankara. However, Assad, who eagerly and intentionally killed his own people, is still a butcher in the eyes of Ankara, and cannot be trusted, even though Turkey had changed its priorities in Syria after the U.S.-led coalition began backing the Syrian branch of the PKK, a designated terror organization in Turkey, the U.S. and the EU.

As a matter of fact, let alone for Assad's war crimes in Syria, Turkey is absolutely right with its concerns on him and his regime. Since the PKK's Syrian offshoot has panicked after Trump's withdrawal decision, it is known that the Assad regime and PYD are trying to find common ground to resume their close relations. Assad had been angry with the PYD since 2013, as he wanted to use the terror organization as a tool against Turkey; however, when the Americans decided to land on the ground in Syria, the PYD chose to become "the boots on the ground" for the U.S.

Not using the words PKK, PYD, People's Protection Units (YPG) or the so-called Syrian Democratic Forces (SDF), a phrase coined phrase by the Americans to veil Washington's support for a terrorist group in order to defeat another terrorist group, namely Daesh, Assad addressed the PYD in a speech three days ago, and said "those trusting U.S. support in Syria will be sold out by Washington, which sees them as a token chip in a political bargain." Apparently referencing the talks between Erdoğan and Trump with regards to the Syrian-Turkish border. "Relying on foreign support will only see those groups becoming the 'slaves of Turkey,'" he said and added, "No one will protect you except your state."

On the same day Assad said these words, the U.S. special envoy to Syria, James Jeffrey, spoke at the Munich Security Conference and said that Washington didn't want the Syrian regime to regain control over the northeastern parts of the country after U.S. troops withdraw.

In front of the cameras and during "politically correct" talks, everyone other than the Assad regime says Turkey's security demands are legitimate; so a 30-40 kilometer deep safe zone at the Syria-Turkey border will be accepted one way or another. Especially after Erdoğan showed his determination in December in stating that Turkey would not allow any terrorist elements to be present near its borders. He publicly said that a new military operation would start at any moment in northern Syria, just a few days before Trump announced his decision to withdraw troops.

Today, Turkey is talking to both the Americans and Russians over establishing a safe zone in northern Syria, and insisting that this safe zone will be under the control of Turkish military and Turkey-backed groups; however, the positions of others with regards to this matter are still not clear. On the other hand, if this safe zone would be established, would it neighbor the PYD-dominated SDF? This is another question mark.

While Turkey, one of the three guarantor countries of the de-escalation zones and a partner of the Astana process, has been defending the rights of the opposition since the beginning of the bloody civil war, Russia and Iran are known as the guardians of the Assad regime. However, there are many conflicts of interests between Iran and Russia on the ground. The cases of Russia acting out of sync with Assad's Iran-backed allies in the war are increasing day by day, and speculations that Russia will force Iran out of Syria are growing. Of course, that kind of act would make Israel and the U.S. happy, and there are many reports alleging that Russia and Israel are working on such a deal. But if those speculations are true, what will Iran's reaction be, especially after investing so much in Syria and the Assad regime?

Gamble on the regime

Furthermore, the Saudis, the United Arab Emirates (UAE) and Egypt show an unbridled will to embrace Assad again in order to curb the influence of Iran and Turkey, which has put flesh on the bones of the Arab world's efforts to allow Syria to return to the Arab League. And again, what will Iran do if Assad chooses to take its seat again in the Arab league?

I don't know what you think but I am sure that Iran will be responsible for the miserable end of Assad, after all it has sacrificed to take control of Syria. On the other hand, the UAE-led Arab countries are ready to give support to the PYD to stop Turkey in Syria; either Assad will or will not accept their offers to come back to the Arab league.

The reports claim that the Fourth Division supported by Iran refused to hand over areas under its control to the Fifth Corps and Eighth Division backed by Russia, and the fight extended to checkpoints controlled by a group headed by Maher Assad. The clashes killed dozens on both sides.

A source who spoke to the Syrian Observer also alleged that Russia has taken control over the fronts and that military power is in their hands, and it is giving power to Brig. Gen. Suhail al-Hassan, who is an important officer in Syria known for his obedience to Russian orders, and who has had full control of the Abu al-Duhur Airbase after Russia withdrew forces and handed power to al-Hassan.

It is also alleged that Maher Assad has requested a meeting with the Khimeymim base a number of times, but Moscow has repeatedly refused, intensifying the dispute between them and increasing the conflict on the ground, which has still not ended.

Is a coup at door?

While there have been many reports in pro-Assad media over the suspicions of a coup attempt against the Assad regime by the Russian backed warlord al-Hassan, one more question remains: Where is Farouk al Shara, the former deputy of Assad? The name of al Shara, whose hands have not been soaked by blood, had been discussed a lot at the beginning of the civil war, as a man who can be accepted by both sides until a fair and legitimate election takes place. He was off the radar until Russian media reported last year that he would be present and was likely to chair the Syrian dialogue conference in Sochi. Apparently, his name was not approved by the Assad regime. More importantly, some sources on the ground claim that al Shara has been hosted in the Khimeymim base by the Russians for a while.

It is obvious that Putin has an endgame in Syria on the basis of the sovereignty and territorial integrity of Syria, but it is far from what people think. I believe he doesn't want to carry Assad as a burden on his shoulders, and also he wants to show that Russia can bring stability to a war-torn country in the Middle East where the Americans could never succeed. But the main issue is to build a security force for the future of Syria, as the Baath regime has lost too many people during the civil war. Which group or groups will be part of the Syrian army once the country is stabilized and begins to go back to normal is what I bet Putin is working on right now and most probably he is talking directly with Erdoğan and indirectly with Trump.