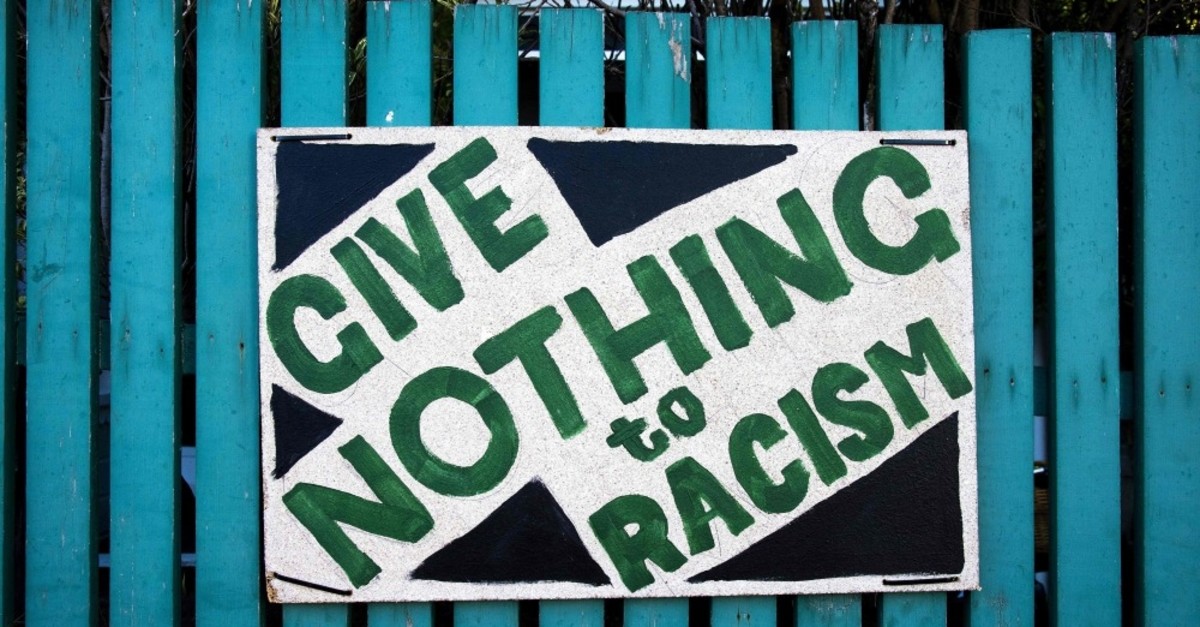 A placard that reads ,give nothing to racism, is seen on a picket fence in Wellington on March 22, 2019, a week after the twin mosque massacre in Chrishchurch, New Zealand.
by Merve Şebnem Oruç
Mar 23, 2019 12:17 am

On Jan., 12, 2015, an estimated 3.7 million people rallied in shows of unity and solidarity across France after the killings in Paris, and more than 40 world leaders marched with them shoulder to shoulder. From Jan. 7 to Jan. 9, 17 people were killed by three terrorists in attacks on the satirical magazine Charlie Hebdo, a kosher grocery and the Paris suburb of Montrouge. The march was organized in a very short time; however, millions walked the streets of Paris chanting "Je suis Charlie" (I am Charlie). Elsewhere in the world, from Hong Kong to Tunisia, crowds gathered in major world cities, with famous monuments illuminated in the Tricolor.

Charlie Hebdo is known as a satirical newspaper that has said to be against any authority, anything held as sacred, or any individual or group claiming supremacy. After cartoons mocking Islam many times, in 2015, the magazine published a number that insulted Prophet Mohammed once again and provoked Muslims, who believe that drawing the Prophet's pictures in any way are banned and it is blasphemy. In the simplest term, the editors of the "irresponsible magazine" – it's their own words – hurt the feelings of the believers of Islam. But more than that, acting recklessly, they paved the way for extremists, one of whom pledged allegiance to Daesh and the other two declared their loyalty to al-Qaida in the Arabian peninsula, finding a pretext for their bloody attack. All Muslim countries, including the French Muslim community, immediately condemned the terrorist attack.

The Charlie Hebdo attack was different than other massacres and slaughters because it was seen as an attack on freedom of speech. In the wake of the attack, the world seemed to me in a way to think that there is nothing greater than freedom of expression. I thought the holy idea of freedom of speech is superior to everything. Paris was like an outdoor temple revering divine free speech that day. But, where was freedom of religion, another cornerstone of democracy, I asked myself. Following all the marches, all the unity messages and saluting freedom of expression, it looked to me like some kind of hypocrisy. Seeing double standards with regards to freedom of speech and freedom of religion, I now remember that I thought it was a milestone: Islam would definitely be attacked after that day under the pretext of being a non-peaceful religion, and it will not be limited to words, mocking or insults.

Today, many intelligence agencies in the West warn that white supremacists have been buying and taking up arms. It started with Anders Behring Breivik, who killed 77 people on July 22, 2011, six months after the Charlie Hebdo attack, and who carried out a meticulously planned terror attack in Norway, a very peaceful country. The Norwegian terrorist Breivik, who was convicted as a "lone wolf," wrote a 1,500-page long manifesto, in which he explained his extreme view of his Nordic race being threatened by Islam due to the actions of "domestic traitors." His text called for the deportation of all Muslims from Europe and offered a guideline for preparing similar violent attacks.

And last week on Friday, an Australian terrorist, Brenton Tarrant, killed 50 Muslims in two mosques in Christchurch in another peaceful country, New Zealand, while they were praying. There are still no global marches for the people who lost their lives, no unity and solidarity promises from other countries, almost no condemnation or warning for the rising extreme far-right and far-left group's terrorism threats from world leaders. Other than Muslim countries, including Turkey, only German Chancellor Angela Merkel in the West uttered the word "terrorism" when she expressed sorrow over the "citizens who were attacked and murdered out of racist hatred" in attacks on the mosques. She said, "We stand together against such acts of terrorism," through her spokesman, adding that the victims had been doing nothing more than "peacefully praying in their mosque." Also, Australia's current Prime Minister Scott Morrison said a few words and described Australian Tarrant, who also threatened the Muslim world in a 74-page manifesto, as an "extremist, right-wing, violent terrorist."

However, no matter how she has been left alone by the rest of the Western world, New Zealand's Prime Minister Jacinda Ardern tried her best to do almost everything to ease the pain of the families of the victims. She decisively stood against terrorism in a world where even liberal or centrist leaders are trying to be sympathetic to white supremacists with the intent of not losing their votes. In her own words, Jacinda Ardern took on a role to "voice the grief of a nation." She has become the face of New Zealand to the world and denounced terrorist attacks. Right after the attack, on Saturday, wearing a headscarf to show respect, she visited the families of the victims and promised to ensure their safety in mosques and the rest of the country

Ardern opened Tuesday's session of the New Zealand Parliament with an evocative "Assalamu alaikum" message of peace to Muslims and vowed never to utter the name of the twin-mosque terrorist. "He is a terrorist. He is a criminal. He is an extremist. But he will, when I speak, be nameless," she said. There was a recitation from the Quran, a tribute for the souls of Muslims killed in the attacks. Led by Ardern, all the MPs, wearing black, had a moment of silence and listened to the recitation. In memoriam of the victims, many New Zealanders mourned, visited mosques, and placed flowers on memorials. In addition, on Thursday, she declared a ban on military-style rifles, which includes assault rifles and military-like semi-automatic rifles. Her stance is now dubbed as "Jacindamania." And it looks like she will not stop although Western leaders have left her on her own.

Will she be nominated for the Nobel Peace Prize? Myanmar's Aung San Suu Kyi received a Nobel Peace Prize, but now tolerates the army's genocide against Rohingya Muslims; Ardern will probably not. It is disappointing and scary for the future that millions in the West marched to defend Charlie Hebdo's right to attack and insult Islamic values and Muslims under the pretext of freedom of speech, but almost no Western leaders care about freedom of religion when it comes to Islam. They show no interest and sympathy for the 50 people killed by a terrorist who gives inspiration to other white supremacists.