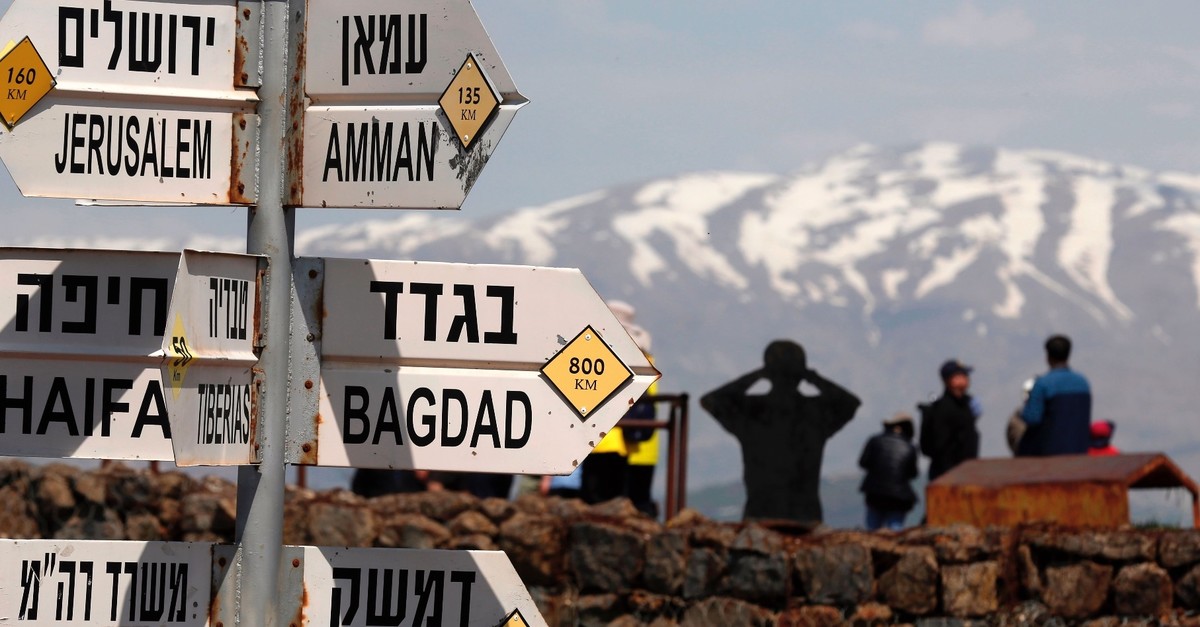 A sign for tourists shows the direction to Jerusalem, Amman, Baghdad and Damascus among other destinations at an army post on Mount Bental in the Israeli-annexed Golan Heights, March 22, 2019.
by Merve Şebnem Oruç Mar 25, 2019 12:03 am

On May 15, 2018, the Trump administration, led by Donald Trump's daughter Ivanka Trump and his son-in-law Jared Kushner, held a ceremony in Al-Quds (Jerusalem) to celebrate a very grotesque event – the opening of the U.S. Embassy in the city. The highest-ranking Israeli officials such as President Reuven Rivlin and Prime Minister Benjamin Netanyahu attended the opening, as it was a historic [and bloody] day for Israel. Israel killed dozens of Palestinians and injured thousands in protests in Gaza and the West Bank over moving the U.S. Embassy to Jerusalem. As Palestinian bodies fell to the ground, May 15 became the bloodiest day in Gaza since the 2014 war. However, American and Israeli officials were cheerfully celebrating the opening of the embassy. Two Christian evangelical pastors, Robert Jeffress and John C. Hagee were there to give prayers and benediction. The selection of the two Texas pastors who are known for insulting other religions and controversial quotes was a sign, for some Christians, that the recognition of Jerusalem as Israel's capital was U.S. President Donald Trump's gift to the evangelicals.

American evangelicals have been using a term to praise Trump for a while: "You are the modern day Cyrus." Also, some Jewish people feel the same. Netanyahu predicted the rise of a new Cyrus in his speech to the American Israel Public Affairs Committee (AIPAC) in March 2018. An Israeli Orthodox group, the Mikdash Educational Center produced a "temple coin" that shows an image of Trump side by side with Cyrus. Cyrus was an ancient Persian king chosen by God to "navigate in chaos."

Many evangelical speakers and media outlets today compare Trump to Cyrus, who conquered Babylon and ended Babylonian captivity in the sixth century before Christ, a period during which the Israelites had been forcibly resettled in exile. They say Cyrus was not a religious person, he ruled in line with Zoroastrian beliefs; but it was God's work, he was sent as a vessel for the return of the Jews to the area known as Israel and built a temple in Jerusalem.

Last week on Friday, U.S. Secretary of State Mike Pompeo agreed with them in a similar way. This time it was Queen Esther, not Cyrus the Great. The Persian Queen Esther, who was born as a Jewish exile named Hadassah according to the Book of Esther, eventually became the queen of Persia. Married to King Ahasuerus, Esther interceded on behalf of the Jewish people of the kingdom and prevented their annihilation. Esther is a symbol of the Jewish holiday of Purim, which was celebrated last week.

In an interview during a trip to Jerusalem, the Christian Broadcast Network's Chris Mitchell asked Pompeo, "Could it be that President Trump right now has been sort of raised for such a time as this, just like Queen Esther, to help save the Jewish people from the Iranian menace?" Pompeo agreed with his suggestion and said that it is possible God raised Donald Trump to be president in order to protect Israel from Iran. "As a Christian, I certainly believe that's possible."

Pompeo's remarks in the interview came shortly after Trump announced that the U.S. would recognize Israel's sovereignty over the Golan Heights, overturning the longstanding U.S. policy toward the area, which was seized from Syria during the Six-Day War in 1967. According to journalists who followed Pompeo in Israel, Israel Prime Minister Benjamin Netanyahu and Pompeo were together when Trump tweeted: "After 52 years it is time for the U.S. to fully recognize Israel's Sovereignty over the Golan Heights, which is of critical strategic and security importance to the State of Israel and Regional Stability!"

Netanyahu and Pompeo's appearance in front of the journalists raised questions whether Trump's tweet was a surprise for both or something planned that they were waiting for.

The Trump administration has been considering recognizing Israel's sovereignty over the strategic highlands captured by Israel for some time. There had been signals a decision was coming. For instance, the U.S. State Department recently dropped the phrase "Israeli-occupied" from the Golan Heights section to calling it "Israeli-controlled." Netanyahu had pressed the matter with Pompeo just a day earlier before Trump's tweet. However, the officials had not expected a decision until this week, when Netanyahu is to visit the U.S, but obviously, both sides want to emphasize the decision.

It is a major shift even for Washington as the U.S. has rejected Israel's occupation of the Golan Heights as well as many other countries and the U.N. After Israel's Knesset adopted a law that sought to formally annex the Golan Heights and incorporate them into the Israeli state in 1981, the U.N. Security Council adopted a resolution declaring such action "null and void and without international legal effect," and prohibited such annexation. In spite of this opposition by the international community, the de facto occupation of the Golan Heights into the state of Israel has largely continued. Until Trump's tweet, the U.S. had maintained a consistent position in line with the U.N. Charter on the Golan Heights, declining to recognize any fixed borders absent negotiations between Israel and Syria while promising to give weight to Israeli territorial claims and demands for a secure border. Trump's announcement not only disrupts this policy but arguably runs counter to the international law principle.

The Golan Heights has political and strategic significance for both Syria and Israel. After the 1967 Six-Day War, an armistice line was established and the region came under Israeli military control. Almost immediately Israel began to settle the Golan. Syria tried to retake the Golan Heights during the 1973 Middle East war but couldn't be successful. Both countries signed an armistice in 1974 and a U.N. observer force has been in place on the cease-fire line since then. Israel's unilateral annexation in 1981 was not recognized internationally.

There have been many peace talk attempts during Hafez Assad's era but there was no solution reached. In late 2003, Syrian President Bashar Assad said he was ready to revive peace talks with Israel. But the main problem starting from the initial talks have been the same. Syria wants Israel to withdraw to the pre-1967 border that would give Damascus control of the eastern shore of the Sea of Galilee, which is Israel's main source of fresh water.

Indirect talks between Israel and Syria resumed in 2008, through Turkish government intermediaries, but were suspended following the resignation of Israeli Prime Minister Ehud Olmert over a corruption inquiry.

Netanyahu was elected in February 2009 indicated and showed that he was determined to take a tougher line over Golan, and in June 2009 Syria said there was no partner for talks on the Israeli side. Former U.S. President Barack Obama declared the restarting of talks between Israel and Syria to be one of his main foreign policy goals, but the civil war in Syria in 2011 didn't let the talks go on. And the war reached the Golan cease-fire lines in 2013.

It is still unclear whether Trump was merely calling for U.S. recognition of Israeli sovereignty over Golan Heights or decided to implement it. But we have a hint in what he said and when he opened the U.S. Embassy in Jerusalem. His National Security Adviser John Bolton tweeted his agreement a few hours later. He said: "To allow Golan Heights to be controlled by the likes of the Syrian and Iranian regimes would turn a blind eye to the atrocities of Assad and the destabilizing presence of Iran in the region. Strengthening Israel's security enhances our ability to fight common threats together."

Instead of other U.S. officials who couldn't make any public comment, the first person to celebrate the change in U.S. policy was, of course, Netanyahu. Speaking next to Pompeo from the prime minister's residence in Jerusalem, he claimed to have discussed the decision with Trump. He described the decision as a "miracle of Purim" and tied the issue to Iran, saying once again that Trump made history.

Israel has said for a long time that it would not let Iranian presence close to its borders and has accused Iranian forces in Syria several times of firing rockets at Israeli front-line military positions in the Golan Heights. In return, Israel air forces destroyed weapons storage facilities, logistics and intelligence centers used by Iranian forces in Syria. The Trump administration's main narrative is also parallel with Israel's stance. From Trump to Bolton or Pompeo, they say that they will not let Iran's presence in Syria and will do everything to secure Israel's borders. But on the other hand, Bashar Assad currently has no word to say about the issue as Tehran is now the only guardian to protect him as he doesn't trust Russia anymore because of Russian and Turkish deals with regards to de-escalating violence in Syria.

Recognizing Israel's sovereignty over the Golan Heights was important [for Israel] after years of Israeli-Arab wars and the Syrian civil war; however, many think today Trump's decision is an attempt to support Netanyahu in re-election next month, while he still insists on his Middle East peace plan, yet to be unveiled. His special Middle East adviser and son-in-law Jared Kushner, who has been involved in the plan's roll-out, was in the Middle East last month to show support.

With the upcoming April 9 vote close, Netanyahu is now smiling. Netanyahu has for weeks been stepping up longstanding Israeli requests for the U.S. and others to recognize Israel's sovereignty over the Golan. He has bolstered Israel's traditional argument that the area has for all practical purposes been fully integrated into Israel by accusing Iran of trying to infiltrate terrorists from Syria into the plateau.

After Trump's tweet, Netanyahu also tweeted, "At a time when Iran seeks to use Syria as a platform to destroy Israel, President Trump boldly recognizes Israeli sovereignty over the Golan Heights." Pompeo's presence also appeared to signal Trump's support for Netanyahu the political candidate. It's very rare for a secretary of state to visit an Israeli prime minister without any apparent diplomatic reason justifying it, without a peace process, without any regional agenda. All this shows that Trump is absolutely endorsing Netanyahu.