Don't blame Turkey if the East Med gas party is over 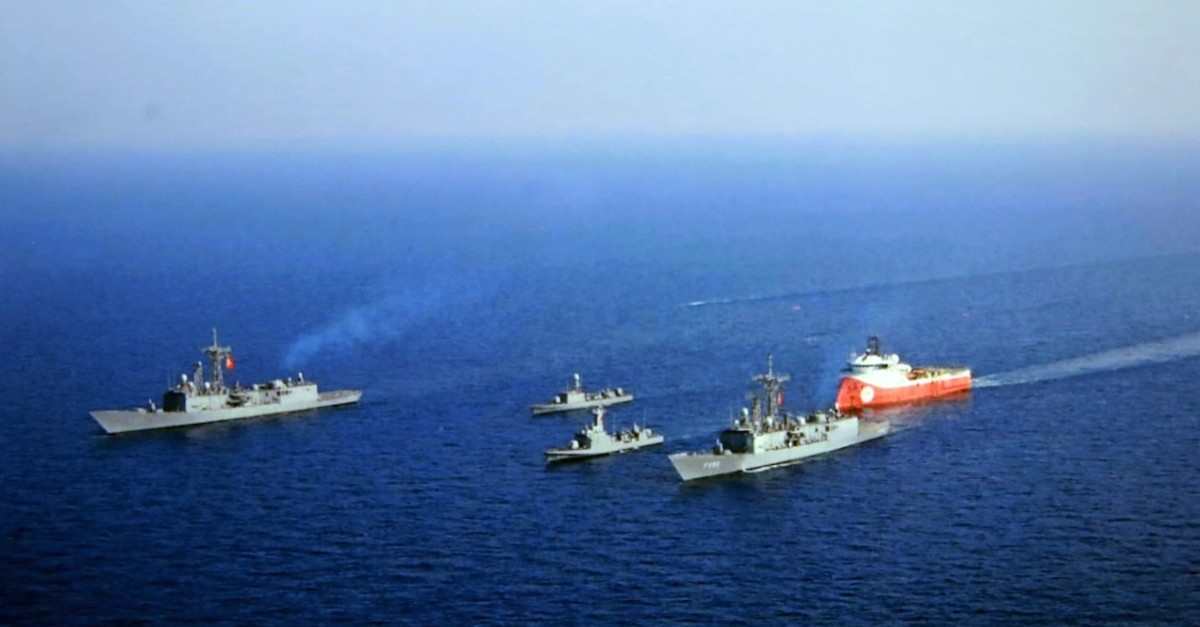 Don't blame Turkey if the East Med gas party is over

Energy has always had a big part to play in the Middle East, as it does today. The Middle East's waters have heated up once again with the U.S. deploying an amphibious assault ship and a Patriot missile battery to bolster its aircraft carrier and B-52 bombers that it already sent to the Gulf in order to increase pressure on Iran following oil sanctions. While we all watch the aggression between the straits of Hormuz and Bab el-Mandeb, and the threats made against each other between Washington and Tehran as well, in the north, another long-time dispute over natural gas resources of the Eastern Mediterranean is still ongoing.

It's been nine years since a huge natural gas field was discovered off the shores of Haifa port of Israel. Namely, the Leviathan field's recoverable volume is estimated to be more than 600 billion cubic meters of gas by Noble Energy, the U.S. company that discovered the field in 2010. Israel's gas reserves are not big compared to global volumes, however, the numbers associated with Leviathan could be a game-changer for Israel.

On the other hand, other fields have been found in the same basin such as the Aphrodite field near Cyprus. However, only one very small gas field, Tamar that now supplies the Israeli energy sector, has been developed so far. The Tamar field contains only around 80 billion cubic meters of gas, and yet it provides around 60 percent of Israel's electricity and looks like it will do so for years. So, if Leviathan starts to work, it will make Israel a net gas exporter.

Today, energy experts believe that there is much more gas waiting to be discovered in the Eastern Mediterranean along the coasts of Gaza, Lebanon, Egypt's Sinai in the south, Greek Cypriot, the Turkish Republic of Northern Cyprus (TRNC) and Syria in the north. However, apart from Tamar, the gas in question is in waiting and further exploration has been frozen as there isn't an export route for an enormous amount of gas, of which the volume far exceeds the domestic needs of the countries involved.

Even if Israel succeeds in exporting natural gas from Leviathan, it has to work with other regional countries to deliver it to Europe. Today it looks like it has no option other than Greek Cyprus and Egypt. According to last year's reports, Israel, Greek Cyprus, Greece and Italy have reached an agreement to lay a pipeline connecting Israel's gas reserves to the three countries, in a major project, namely East Med, that will supply gas from the Eastern Mediterranean to Europe. Europe, too, has an interest in seeing the development of the East Med proceed, which would enable it to diversify its energy suppliers and reduce its dependence on Russian gas.

However, the construction cost of East Med, according to initial estimates, is $7 billion. Nicosia is also pushing to link the pipeline through the Aphrodite field to a liquefied natural gas (LNG) facility in Egypt, which will also cost around $1 billion. And we have to note that such a major project is expected to be financed by the EU.

Even though it is supported by the Greek and Italian governments, not to mention that both are also known to be very critical of Brussels, the cost is quite high. Constructing an LNG processing plant and shipping the resources not only to Europe but also to the growing markets of Asia in order to compensate the capital cost is an option. But even if it is done, it would be quite uncompetitive in a world where there is no shortage of gas supply.

It must be very annoying that Turkey is the obvious and the most cost-effective transit point for all this gas as it is geographically very close to the fields in question and already has a domestic pipeline network that could carry the gas to Europe. Through an offshore pipeline to Turkey and by collecting resources from all the fields along the way, the East Med can be carried out. However, this option has already been ruled out because of the current disputes. Israel's savage policies aiming to wipe off the Palestinians and the ongoing dispute between Greek Cypriots and the TRNC are the very first obstacles against such a solution.

In addition to that, Cairo is the third member of team Abu Dhabi and Riyadh, which are at odds with Ankara over many regional issues. While all those countries have been trying to dig a pit for Turkey for a long time, how can they expect such a favor from Ankara?

Since the energy resources are not only limited with the south and east of Cyprus, Ankara has also started conducting drilling in the Eastern Mediterranean. Turkey initiated its first deep sea drilling operation off the shores of Antalya on Turkey's southern Mediterranean coast in October 2018 with its first drilling vessel, Fatih. Fatih started drilling its second well this month. Dispatched from Antalya port on May 3 with three support vessels and a frigate toward its exclusive economic zone west of Cyprus, Fatih will conduct exploratory activities at 31 29 25 east longitude and 34 55 32 latitude, according to a navigational telex issued by Ankara. Of course, all hell broke loose after this, and a war of words among many states has started.

Greek Cypriot quickly issued a statement and claimed that Turkish operation would encroach on Greek Cyprus' exclusive zone. The U.S. and the EU were also fast; they have expressed "deep concern" over Turkey's plans for offshore drilling operations in an area claimed by Greek Cyprus as its exclusive economic zone, adding the East Mediterranean issue to their ongoing tensions with Ankara. Egypt also issued a statement and warned Turkey against drilling activities in Cyprus' waters.

The Turkish Foreign Ministry responded to the EU and said, "Turkey's hydrocarbon-related activities in the Eastern Mediterranean region are based on its legitimate rights stemming from international law." Ankara also responded to the U.S., stating, "The U.S. statement that Turkey was intending to drill on an area 'claimed' by Greek Cyprus falsely implied the Greek Cypriots had secured a legal right to the area, disregarding international law."

Having the longest coastal line in the region, Turkey has to protect its own rights and interests, as well as those of the Turkish Cypriots. As the current disputes are part of broader disputes, the Greek Cypriot administration's uncompromising attitude is not something new for Turkey. Disregarding the rights of the Turkish Cypriots, who are the co-owners of Cyprus, Greek Cyprus has been refusing every proposal of cooperation and insisting on its unilateral activities in the region for decades, as it is today.

Ignoring the threats of Greek Cyprus and its allies, Turkey's second drillship Yavuz is going to join Fatih soon in order to expand hydrocarbon explorations of Turkey in the Eastern Mediterranean. Turkey's first seismic vessel, Barbaros Hayreddin, has already been conducting surveys in the region since 2013. Greek Cyprus can get angry as much as it wants, but neither it nor Greece can take on Turkey's militarily if things come to that point. NATO would avoid another big conflict between two members, Turkey and Greece once again; and the EU can't go beyond threats especially because it has its own problems, which can only be solved with Turkey's help such as the potential risk of a new refugee influx. In addition to that, Ankara has gotten used to the tough talks of Washington but it knows the Trump administration would avoid escalating tension because they need success against Iran over oil sanctions without skyrocketing oil prices.

U.S. and EU officials are supporting Israel, Cyprus and Egypt in developing gas reserves to prevent increasing Turkish presence in the Eastern Mediterranean, but they also want to counter increasing Russian influence. They are actually right to be scared as Turkey will not let its important presence fall, and Russia will not let others prevent its domination in the European energy market. Turkey's Western allies ironically made Russia and Turkey share the same interests regarding energy-related geopolitics, especially after the Turkish Stream pipeline (TurkStream).

Energy ties with the Kremlin

Once upon a time Turkey was an opponent in the energy market, and that's why it was a problem for Russia as Vladimir Putin does not want to lose Russia's dominant role in the oil and gas market. The Nabucco pipeline project was a headache for Russia, so are the Trans Anatolian Gas Pipeline (TANAP) and Trans Adriatic Pipeline (TAP). Thanks to the parochialism of Western leaders, they are not competitors anymore and sharing the same interests. Turkey is poor in oil and natural gas reserves but its geostrategic location makes it feasible to become an energy hub between the Middle East and Europe. Many trans-Turkey pipeline projects, which would carry oil and natural gas from Central Asia and the Middle East to Europe through Turkey, are appealing. And it looks like the winner is Russia as the EU and the U.S. mishandled almost everything in the Middle East.

The offshore section of the 1,800-kilometer TurkStream to supply Russian natural gas to Turkey was completed on November 2018. The pipeline, with a length of 930 kilometers running along the bottom of the Black Sea to the coast of Turkey, will stretch for 180 kilometers on Turkish land to the border of Turkey and neighboring countries. In a word, everything will remain as it is now. Russia will supply gas to Europe, and Europe will still be reliant on gas from Russia, but this time it will get some of it through the Turkish Stream, which is scheduled to be completed at the end of 2019. And that will partially make the EU reliant on Turkey as well.

It is actually sad for the EU. If they had not raised the tension with Turkey in the last couple of years, the gas in the Eastern Mediterranean wouldn't remain largely undeveloped or unexplored until today, and they would have already diversified their gas suppliers. And if they had not picked sides between Greek Cypriot and the TRNC, and tried to help Turkey to solve the decades-long dispute on the island and respect the Turkish Cypriots rights, they wouldn't be stuck with Russian gas. The dynamics could have changed only if low-cost supplies from Iran, Azerbaijan or Turkmenistan come on stream. And this supply's route is again coming through Turkey.

The interest in TurkStream

Today, Bulgaria hopes that the second branch of TurkStream will go to Europe via their soil, Serbia, Hungary and then Slovakia. Greece has also had an interest in TurkStream for a long time too as it cannot fully commit itself to the East Med project which might never happen. In November 2018, at the third Thessaloniki summit of leaders of the Balkan States, it was openly declared that Athens was lobbying in Brussels for a project to extend TurkStream to Europe. In addition, Greece is very interested in TAP, one of the branches of the Southern Gas Corridor along with the TANAP. TAP, which is very important for Greece, according to Alexis Tsipras, is expected to supply gas from the Azerbaijani Shah Deniz and Shah Deniz 2 fields to Europe through Greece, Albania and Italy.

This week, I read several articles on European and Israeli newspapers and portals claiming that the whole region will be poorer if Turkey persists on not carrying Israel's gas to Europe and carries out its own gas exploration activities. But it sounds more like as if Europe has missed an opportunity even though they are trying to stay cool. Russia is now in the Eastern Mediterranean, and Turkey will carry Russian gas to Europe soon. The party is over, and no one is dancing anymore.