Who killed Mohammed Morsi and how? 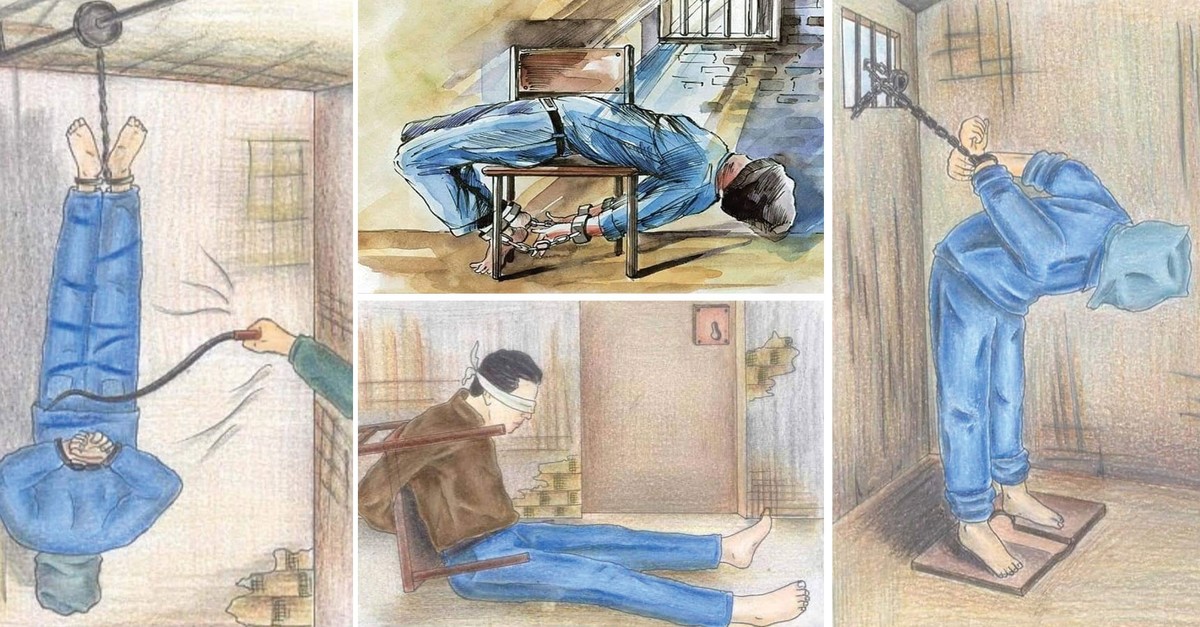 The sketches by 21-year-old Marwan Nabil, who was kept in prison for 12 months and then had to flee to Turkey, depict the inhumane treatment and torture of prisoners in Egyptian jails.
by Merve Şebnem Oruç
Jun 25, 2019 1:55 am

Mohammed Morsi, Egypt's first democratically elected president, who was put in prison by the Abdel-Fattah el-Sissi regime after the coup in 2013, died last week in a soundproof glass cage designed to silence him. He collapsed in a Cairo courtroom on Monday, June 17, while standing trial, and was later declared dead in a hospital, according to local media reports. He suffered a "sudden heart attack," state-run Ahram Gate said. Egyptian newspapers didn't put his story, which would make headlines in a normal country, on the front pages. His death was given a small space on the inside pages with no mention of the former president's title. We didn't expect more from the el-Sissi regime, but the international media coverage was too little as well, since a legitimate leader died in a very tragic way.

Security forces are now accused of murdering Morsi as witnesses say that the police didn't give first aid fast enough when he collapsed.

The 67-year-old former president of Egypt was left "slumped on the floor" of the glass-made courtroom cage for more than 20 minutes, perhaps as many as 40 minutes, despite other defendants despairingly calling for help. Morsi's son Abdullah, accused el-Sissi and a number of other officials of "killing" his father in a Twitter post on Thursday.

President Recep Tayyip Erdoğan, also said that the Egyptian government should be tried in international courts for the death of the late president.

"Mohammed Morsi was on the courtroom floor for 20 minutes, and the authorities did not help him. This is why I say Morsi did not die, he was murdered," Erdoğan said Wednesday last week.

Amr Darrag, a former minister in Morsi's government who spoke with people in the courtroom and relatives of other defendants, said, "Dr. Morsi was kept like that for 20 to 30 minutes without help. Somebody should have rushed to check on him." This gives more room for further doubts. Human rights groups, too, urged a transparent probe into the circumstances of Morsi's death, while the United Nations also has called for an independent investigation into the detention conditions and death of the former president of Egypt.

Rejecting the claims, the Egyptian attorney general's office stated that he "was transported immediately to the hospital" where he was later declared dead. According to the office's statement, there was no evidence of marks or injuries to his body but investigators would conduct a full autopsy and examine courthouse video for evidence. Unsurprisingly, he was buried in a hurry at dawn in Nasr City, an eastern suburb of the capital against the wishes of his family who requested he be laid to rest at his family's cemetery in his home governorate of Sharqiya. Only a few family members and lawyers were allowed to attend the burial, which took place under heavy security, but no one was given access to an autopsy report, if there was one.

What was he charged with?

Morsi faced a number of separate charges in the last six years, and the sentences against him didn't show any sign of fairness. He was sentenced to 20 years of hard labor in April 2015, as he was found guilty of ordering the detention and torture of opposition protesters during clashes with Muslim Brotherhood supporters in front of the Ittihadiya presidential palace in Cairo in December 2012. In October 2016, Egypt's top appeals court, the Court of Cassation, confirmed his conviction and the sentence.

In May 2015, Morsi was given a death penalty after being convicted of colluding with several foreign militants including Hamas and Hezbollah in order to organize a mass prison break during the 2011 uprising. He was found guilty of a mass jailbreak, the murder and kidnapping of guards, damaging and setting fire to prison buildings, and looting the prison's weapons depot. In November 2016, the Court of Cassation decided for a retrial. The 91-year-old Hosni Mubarak, who is walking freely now in Egypt, testified against Morsi during the retrial last December. The 2011 uprising of Egypt was commonly known as the April 25 revolution, one of the most striking events of the so-called Arap Spring, during which the Egyptians had poured onto the streets for freedom and democracy against the Mubarak regime. No verdict had been reached during the retrial before his death in the courtroom.

Morsi was also given a life sentence in May 2015 after being convicted of conspiring to commit terrorist acts with foreign organizations to undermine national security. According to the prosecutors' allegations, the Muslim Brotherhood had planned to send "elements" to military camps run by Hamas in the Gaza Strip, Hezbollah in Lebanon, and the Revolutionary Guards in Iran in 2005. In November 2016, the Court of Cassation decided for a retrial. Morsi died during a session of this retrial in the cage right after addressing the court.

The charges and the sentences he had been faced with were not limited to those. In June 2015, he was sentenced to 25 years in prison after being convicted of leading the Muslim Brotherhood, and a further 15 years for leaking of classified documents to Qatar. In September 2017, the Court of Cassation acquitted Morsi of leaking of classified documents, but granted the conviction of leading an illegal group. He was also accused of insulting the judiciary. He was found guilty and sentenced to three years in prison in December 2017, and ordered to pay a $60,000 to the judge.

Morsi had always rejected the authority of the courts. Since his first trial in November 2013, he said he was the victim of a "military coup." He didn't stop saying that he was Egypt's legitimate president as he shouted numerous times during the Egyptian coup. That is why he was forced to sit in soundproof glass cages in courtrooms. The defendants are intentionally humiliated in the Egyptian courtrooms by being kept in cages in an extreme and inhumane way. Silencing and humiliating Morsi in a soundproof cage was evidence of the scared, guilt and hatred of the el-Sissi regime. His trials were politically motivated.

The man the el-Sissi regime had to get rid of

Morsi was the scapegoat of the April 25 revolution for the old guards of Egypt. Accusing the Muslim Brotherhood and him has always been a "legal tool" to allege that the coup, the killings and the detentions in the summer of 2013 were necessary and right. He served just one year in office and was suddenly declared a "dictator" who was worse than Hosni Mubarak, and paid the price of Egyptian people's demands for democracy and freedom with his life.

He was, and still is, the symbol of the resistance against the military coup and dictators in Egypt as he never took a step back; and that is why he was the very first one for the el-Sissi regime to be rid of as soon as possible. The regime couldn't dare to hang him, refraining from a global outrage. Of course, "a heart attack" in front of the cameras would make a great scene to show that they did not kill him but he died from natural causes. The timing was also fantastic as he was forgotten by the whole world, except his family, friends and some human rights' activists.

What the first, and maybe the last, democratically elected leader of Egypt, went through while he was taking his last breath in the cage was horrific. But it was no less than what he has been through in the courtrooms and in the prison. All his trials were a mockery of law, and full of absence of concrete evidence, judiciary process violations and bias.

He was in solitary confinement for as much as 23 hours a day in the last six years, which is classified as torture under U.N. guidelines. He saw his family just three times. He was suffering from his diabetes, high blood pressure and liver and kidney diseases; however, the regime denied any medical attention despite his lawyers' numerous warnings that it would lead to his death. His family even said they would pay the cost of his medical care, but the regime was deaf to their voices.

And he was just one of tens of thousands of prisoners suffering from similar conditions. The el-Sissi regime arrested at least 60,000 people after he killed almost a thousand on the streets during the coup and the protests. The human right groups documented the widespread use of torture in detention camps in Egypt. Accordingly, the el-Sissi regime doesn't care about basic international prison standards, administer systematic ill-treatment of prisoners and torture inmates.

However, the conditions for some prisoners are more brutal than others. Members of the Muslim Brotherhood, who are labeled as terrorists and the enemies of the state, are held in solitary confinement, where there are no beds, mattresses or basic hygiene items, according to reports.

"The prisoners have been beaten, humiliated and confined for weeks in cramped 'discipline' cells," a Human Rights Watch (HRW) report says in 2017. HRW also states that the authorities "interfered with their medical care in ways that may have contributed to some of their deaths." At least 300 detainees have died in prison in Egypt since the 2013 coup due to torture and ill-treatment, according to reports.

Today, there are at least thousands of Egyptians who escaped from the brutality of the el-Sissi regime in Turkey, which hosts more than 4 million refugees, and not all of them are members of the Muslim Brotherhood. Marwan Nabil, who was kept in prison for 12 months, had to find a way to come to Turkey to find a safe haven after non-stop pressure that went on even on days when he was finally out. Marwan, a law student, was 21 years old when he was arrested at his university in Mansoura, the capital of Dakahlia governate. He was not a member of the Muslim Brotherhood or any other organizations; he was just in Rabaa Al-Adawiyya Square to peacefully protest the military coup, where hundreds were killed and thousands were injured in August 2013. He was electrocuted and tortured in many horrific ways for 12 months, which left permanent marks and injuries on his body, which make his daily life really tough. He will never be able to heal completely. If he didn't leave Egypt, he would be in jail again as he was sentenced to life imprisonment. The amateur drawings inside this story belong to him, as he wants to describe what kind of torture the inmates face.

Even if the Egyptian authorities didn't poison Morsi, injected him or killed him blatantly on Monday, June 17, they killed him slowly, torturing him day by day. One way or the other, the el-Sissi regime is responsible for his death, just like the other hundreds who died in prison and on the streets.