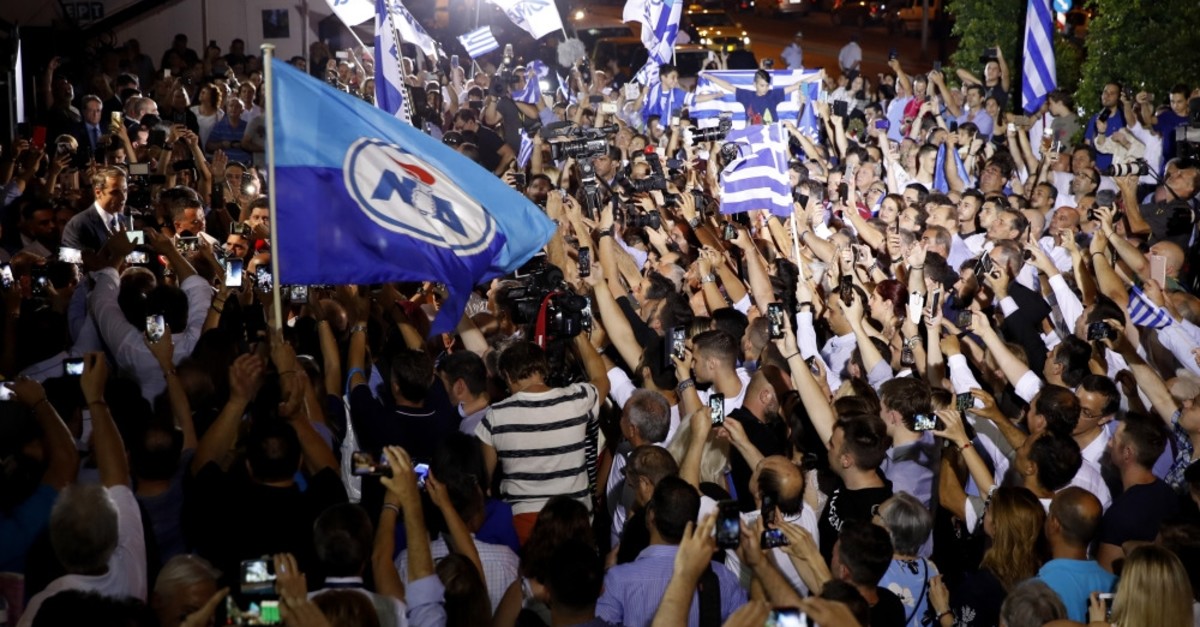 New Democracy (ND) conservative party leader Kyriakos Mitsotakis (L) addresses to his supporters after his victory in the parliamentary elections, at the ND headquarters, Athens, July 7, 2019.
by Merve Şebnem Oruç Jul 10, 2019 12:51 am

The former administration left many problems for the new leader in Athens to manage; the current impasse in Turkey-Greece relations is just one of them

Greece's center-right opposition party, the New Democracy (ND) party, won the snap general elections on Sunday, defeating the radical left-wing Syriza party which had ruled Greece in coalition since 2015. Voters in Greece handed Kyriakos Mitsotakis' center-right party a landslide victory to form a new government. The result of the elections is described as historic by ND officials, and many called it a personal victory for Mitsotakis, who is the son of a former prime minister of Greece and known as a reformist ex-banker.

If the far-right Golden Dawn Party (GD) had been able to get into parliament, that could have changed everything, of course. However, the GD suffered a devastating defeat in the general elections that left the party, often described as neo-Nazi, with no parliamentary representation. Greek voters, who acted in reverse of a trend toward extreme-right politics in many other European countries, should be applauded.

Mitsotakis received his first congratulatory call from President Recep Tayyip Erdoğan. Let's hope that it will be a new start for stronger Turkey-Greek relations since the two have been suffering from decades of tension as NATO rivals – who are technically supposed to be allies. The most recent bad blood has been festering over the worrying developments in the Eastern Mediterranean. As tension in the Eastern Mediterranean heats up, what the new prime minister does next is a top concern for Turkish society.

Conflict between Greece and Turkey is nothing new. Ever since the Treaty of Lausanne, signed in 1923 by the Allies of World War I, started regulating the basics of Greek-Turkish relations, the historical rivalry has hardly lessened. That's why new conflicts are always associated with unforgotten experiences of past issues.

In light of Soviet meddling in Turkish and Greek affairs, the Harry Truman administration passed the Truman Doctrine in 1947, which reoriented U.S. foreign policy, as Britain would no longer provide assistance to the Greek government in its civil war against the Greek Communist Party. According to Truman, a communist Greece would endanger Turkey's stability, which would put the Middle East's stability on the line. In this regard, Turkey and Greece were admitted into NATO during the alliance's first expansion in 1952.

However, being two NATO allies did not lessen the rivalry between the two countries. Following the Bloody Christmas events in Cyprus, the outbreak of violence against Turkish Cypriots on the night of Dec. 20, 1963, when the death toll amounted to a civil war, Greece-Turkey relations immediately went south.

After the 1974 Cypriot coup staged by the Cypriot National Guard and the Greek military junta, Turkey rightfully sent its forces to Cyprus to protect Turkish Cypriots under the Treatment of Guarantee signed between the United Kingdom and Northern Ireland, the Kingdom of Greece, the Republic of Turkey and the Republic of Cyprus.

At that time, Turkey's relations with the U.S. were damaged as well as with Greece after Washington imposed an arms embargo on Ankara in 1975, taking a side during the tension between the two NATO allies. The unsolved dispute over Cyprus, as well as the memories of the bloody war that left thousands of dead and many more displaced in the aftermath, still continues to cast a shadow over bilateral relations between the two countries.

On the other hand, Greece's mistreatment of Turkish minorities in Western Thrace and not recognizing their rights is one of the other major issues that hasn't been solved. Ethnic Turks have been living in Thrace for at least 600 years, and they are Greek citizens.

Under the Treaty of Lausanne, the Turkish minority of Thrace was granted rights ensuring protection of their religion, culture and language, and equality with the Greeks before the law. Despite such protections, however, ethnic Turks have suffered human rights violations for years. The Greek state refuses to accept the fact that a person of Turkish descent can be a loyal Greek citizen and, at the same time, a Turk proud of their roots. Turks are seen as suspected threats to the Greek state.

In addition to those issues, the recent war of words started with the fleeing of eight air force pilots, who are members of the Gülenist Terror Group (FETÖ), to Greece following the July 15, 2016 failed coup attempt in Turkey. In January 2017, the Greek Supreme Court decided against the extradition of the soldiers requested by Turkey. Then, in 2018, one of those Gülenists was granted asylum by Greece.

Prior to the asylum decision, President Erdoğan had brought up this issue as well as many others during his visit to Athens last year, which was the first visit by a Turkish president in 65 years. His visit could have been a chance to heal some wounds; however, Greece's actions after the attempted coup didn't help.

During his visit, President Erdoğan also said the Lausanne Treaty should be reconsidered to solve the problems, mentioning Greece's mistreatment of the Turkish Muslim minority in Western Thrace and criticizing the Greek state for the failure of peace talks in Cyprus.

The crisis at sea

However, the main problem has always been the Aegean Sea, which is a semi-closed sea between the two countries. Around 3,000 islands and islets exist in the Aegean, with no definite ownership by either country listed in international treaties. For over 40 years, the two countries have had disputes over the dimensions of their territorial waters, continental shelves and national airspace.

Actually, the disputes over the Aegean could have been easily solved through diplomatic channels if Greece hadn't had a goal of turning the Aegean into a Greek Sea. Greece and Turkey came close to armed conflict over the uninhabited Kardak Islet in 1996. There was a period of increased diplomatic moves three years after the incident, which unsurprisingly failed.

After almost two decades, the situation in the Aegean and airspace have significantly heated up again in the last couple of years. For instance, in July 2017, a Turkish boat was shot at by the Greek coast guard, and in February 2018, Turkish patrol boats crashed to three Greek boats that had tried to infiltrate the Kardak islets. Then in mid-April 2018, Greek soldiers opened fire on a Turkish helicopter, and a Greek fighter jet crashed into the Aegean on its return from one of the mock dog fights with Turkish warplanes.

Ultra-nationalist leader Panos Kammenos, who was also minister of national defense, visited Kardak in 2016, reviving the memories of the soldiers who died in the 1996 incident and ensured everyone that the dispute was still going on.

And most recently, the two countries have been engaged in a new confrontation in the Eastern Mediterranean dispute. The Greek Cypriot administration issued international arrest warrants for 25 people, including the personnel of the Turkish drillship Fatih and officials from companies cooperating with the state-run Turkish Petroleum Corporation (TPAO), as Daily Sabah reported on June 10.

"The Fatih drilling vessel is currently located in an area within Turkey's continental shelf, which is also claimed by Greek Cyprus within its exclusive economic zone. However, it is not among the areas unilaterally licensed by Nicosia for hydrocarbons," Daily Sabah said.

Foreign Ministry spokesperson Hami Aksoy made a statement that Turkey closely monitors the developments and if true, the Greek Cypriot administration's arrest warrants would be null and void for Ankara. "If it dares to [arrest Fatih's employees], no one should doubt that we will give the necessary response," Aksoy said.

Another dispute over natural gas resources of the Eastern Mediterranean is still ongoing. It's been nine years since a huge natural gas field was discovered off the shores of Israel's Haifa Port, namely the Leviathan field. Its recoverable volume was estimated to be more than 600 billion cubic meters of gas by Noble Energy, the U.S. company that discovered the field in 2010. Israel's gas reserves are not big compared to global volumes; however, the numbers associated with Leviathan could be a game changer for Israel.

On the other hand, other fields have been found in the same basin, such as the Aphrodite field near Cyprus. Of course, these developments are appetizing for Greece as well as the Greek Cypriot administration. But the gas in question is being disputed and further exploration has been frozen, as there isn't an export route except via Turkey for an enormous amount of gas, of which the volume far exceeds the domestic needs of the countries involved.

Even if Israel succeeds in exporting natural gas from Leviathan, it has to work with other regional countries to deliver it to Europe. Today, it looks like it has no option other than Greek Cyprus and Egypt.

According to last year's reports, Israel, Greek Cyprus, Greece and Italy reached agreements to lay a pipeline connecting Israel's gas reserves to the three countries in a major project, namely the East Med, that will supply gas from the Eastern Mediterranean to Europe. Europe, too, has an interest in seeing the development of the East Med proceed, which would enable it to diversify its energy suppliers and reduce its dependence on Russian gas.

However, the construction cost of East Med, according to initial estimates, is $7 billion. Nicosia is also pushing to link the pipeline through the Aphrodite field to a liquefied natural gas (LNG) facility in Egypt, which will also cost around $1 billion.

And we have to note that such a major project is expected to be financed by the EU.

Even though it is supported by Greek and Italian governments, not to mention that both are also known to be very critical of Brussels, the cost is quite high.

Constructing an LNG processing plant and shipping the resources not only to Europe but also to the growing markets of Asia to compensate the capital cost is an option. But even if it is done, it would be quite uncompetitive in a world where there is no shortage of gas supply.

As Greek and Greek Cypriot news outlets have been warmongering for awhile against Ankara since Turkey has its own drilling activities in the Eastern Mediterranean, we can expect the hostilities to continue, but it is unlikely that an actual war will erupt.

Turkey and Greece have never had an actual war since the 1920s. Greece cannot afford such a war, and Turkey doesn't want any more violence after all that has happened in the Middle East, especially in Syria. Now the possible scenario is continuous, small-scale military operations especially in and around the Aegean and the Eastern Mediterranean.

Such operations might lead to new dogfights between Turkey and Greece. Let's hope that there will be no military or civilian casualties on either side. Now that Prime Minister Kyriakos Mitsotakis has an absolute majority in the Greek Parliament for his ND party, he is expected to make reforms in Greece's economy and modernize the state as priorities. However, how Greece-Turkey relations play out during his term will be another important agenda item on his desk.