Does Trump really regret Turkey's removal from the F-35 program? 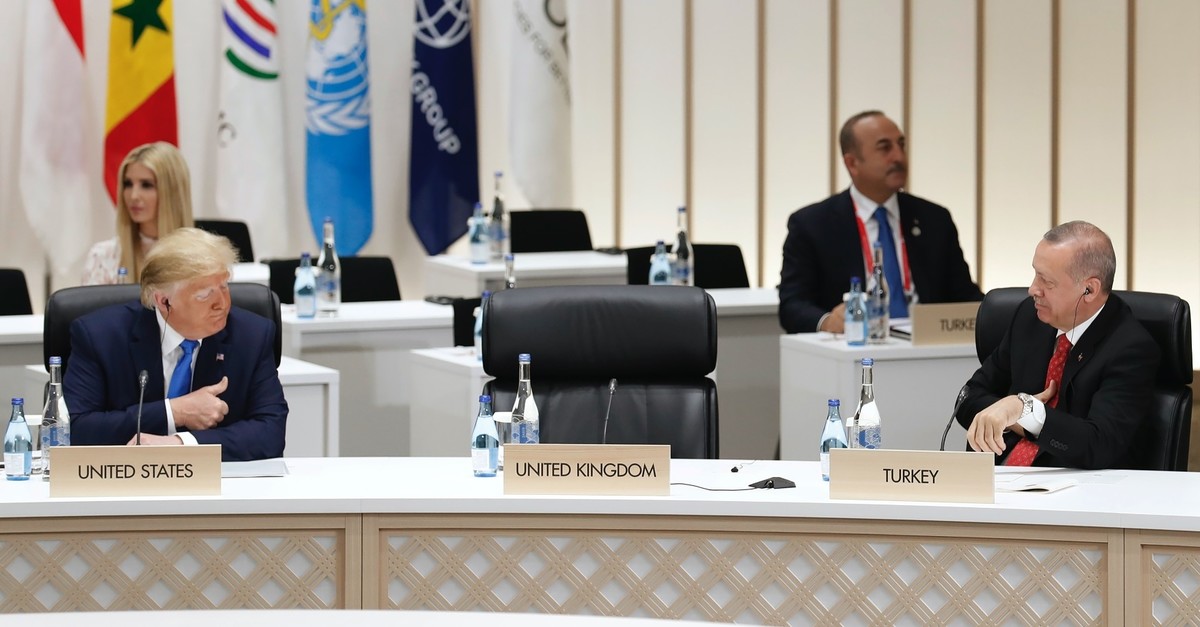 At the end of June, during the G20 summit in Osaka, Japan, U.S. President Donald Trump admitted in front of the international media that Turkey was pushed by the U.S. to buy high-altitude missile defense systems from Russia. Trump confirmed that the administration of his predecessor Barack Obama didn't sell the Patriot missile systems when Turkey knocked on the U.S.' door in the first place.

The U.S. president did not stop there and added that it would not be fair if Turkey was prevented from getting the F-35 fighter jets after it had already paid money and been a part of the project. Trump also underlined that the F-35 project started years before Turkey's purchase of the S-400s.

Some circles in Ankara were optimistic about the fate of Turkish-American relations after President Recep Tayyip Erdoğan's meeting with his U.S. counterpart Trump in Osaka, but I was suspicious. I asked in this column earlier this month what Trump could do in regard to the sanctions threats by Congress and the Pentagon about the purchase of the Russian air defense systems against Turkey. As we recall, the U.S. president vowed to withdraw American troops from Syria, but he couldn't do it. Could we trust his words in Osaka? Or could we believe that he was powerful enough in Washington to stop the sanction bills against Turkey?

As is known, both the Republicans, of which Trump is a member, and the Democrats in Congress have agreed to pressure Turkey with sanctions. I had doubts about whether he would be able to change minds in Washington in the short term, especially at a time when he is about to start preparations for the next elections.

Trump's messages could be optimistic, but first he had to fight anti-Turkey groups in Washington. Well, he didn't. But what if it has been more than that? Maybe I was right about being suspicious but wrong about Trump's intentions. What if Trump does also want to block Turkey from purchasing the S-400s or at least is eager to punish Ankara for the deal? Let me tell you why I am about to change my mind.

On Tuesday last week, after Russia began delivering its advanced S-400 system to Turkey, Trump signaled that Turkey would be banned from purchasing the F-35 jets after it bought the S-400s. Blaming the Obama administration for the "very tough situation that they have been forced in" again and being sympathetic toward Turkey during a Cabinet meeting, he said, "Because they have a system of missiles that's made in Russia, they're now prohibited from buying over 100 planes.""Turkey tried very hard to buy them [the Patriots], and they [the Obama administration] wouldn't sell them, and this went on for a long period of time. And it was as soon as they found out that they [Ankara] were going to have to buy the missiles — a comparable missile — not as good a missile, but a comparable, almost, missile from Russia, all of a sudden everybody started rushing and saying to Turkey, 'Okay, we'll sell you the Patriot missile.' It was only when they found out they couldn't get it, then, they say, 'Let's go, we'll sell you the Patriot missile,'" Trump said.

"But, by that time, Turkey had already signed and paid a lot of money to Russia for the missile system that they were not allowed to buy here, foolishly — because Turkey is a NATO member," he added.

Trump also said that Lockheed Martin wasn't exactly happy. However, the company was awarded two contracts worth about $112.4 million for work on the F-

35 stealth fighter jets following Pentagon orders to phase out Turkey subcontractors for the program by next March. I also wonder what Trump thinks about the happiness of Raytheon, the manufacturer of Patriot missiles.

Despite Trump's outward reluctance, on Wednesday, both the White House and the Pentagon made two separate statements and said that Turkey was removed from the F-35 program. Basically, they argued that the F-35s couldn't coexist with the Russian S-400 air defense systems.

Although Turkey has assured its NATO partners that the S-400s will be fully under its own control, policymakers and defense pundits have argued that the radar system of the S-400s are capable of learning about the advanced capabilities of the F-35 and therefore they could pose a great threat to the safety of the aircraft project.

NATO Secretary-General Jens Stoltenberg added, "The S-400, it's not possible to integrate into the integrated NATO air defense and missile system, which is about sharing radar pictures, about joint air policing, which is about shared capabilities," but he also stressed that Turkey has not asked for that after the U.S.' decision.

While Turkey has so far not reacted too much publicly to the latest U.S. move, Trump also signaled his reluctance to impose major sanctions over Turkey's acquisition at first sight during his Cabinet speech on Tuesday, worrying the anti-Turkey lobbyists. Trump can postpone the "legally required" sanctions based on the Countering America's Adversaries Through Sanctions Act (CAATSA) for a 180-day period, but this would be temporary. What will he do afterward? We just don't know yet.

But the most important question is if Trump is sincere in his sympathizing with Turkey or is he faking it? He is putting the blame on the Obama administration for almost everything going south in Turkish-American relations such as the S-400 missiles vs. the F-35 aircraft puzzle. But what if there is more than that?

Trump is right when he accuses Obama over Turkey's purchase of the S-400s. As is known, Ankara has been working on producing its own high-tech military systems for a while.

In July 2017, Turkey, France and Italy signed a letter of intent to cooperate in a joint defense project including air and missile defense systems. And, in December 2017, Turkey also signed a contract with Russia for the S-400 missile systems to warrant its midterm needs. Ever since then, Washington has been pressuring and threatening Turkey with sanctions, political and economic consequences and other issues such as removal from the F-35 fighter jet program, although Turkey has fulfilled all its responsibilities in the project, which it has been involved in since 2002.

However, the U.S. rejection of S-400 purchase is not only about Turkey. Washington is against any other countries' buying S-400s from Russia as well. Several countries have been eyeing the duel between Ankara and Washington, as further orders for the S-400s are likely to follow.

India, for instance, quietly signed a $5 billion deal with Russia to purchase the S-400 systems when Russian President Vladimir Putin visited New Delhi in October 2018, and even Saudi Arabia, Morocco and Iraq are said to be in negotiations to buy the Russian system. In addition, China imported S-400s from Russia under a $3 billion contract signed in 2015, even though it produces its own air defense systems.

As we know Trump has his "businessman personality" and a huge interest in making money, so are we being naive when we think that Trump does not want to remove Turkey from the F-35 program because it bought the S-400s but he has to do it? I mean, what if he also wants to make Turkey an example to others who are eager to buy the Russian missile systems but doesn't want to lose Turkey completely with harsh comments as the anti-Turkey lawmakers in Washington do?

No one should be surprised that Moscow now knows that the American influence in the region and all around the world is related to its arm sales. Finally, starting to sell weapons and founding military partnerships with countries such as Iraq and Egypt, the Russians think that they are able to compete with the U.S. in the arm sales market, while they increase their influence in the Middle East and other parts of the world.

As a matter of fact, Moscow is decreasing the military dependence of countries on the U.S. by proposing alternative military solutions. Russia is making new partners step-by-step by providing them military and technological alternatives to that of the U.S. This is also paving the way for new political relations.

That is why Washington is aggressively angry with Turkey's purchase of the Russian S-400 system as Ankara, a NATO ally of the U.S., would be a "bad example" for others that seek militarily and technologically independence in the long run. As potential S-400 deals can also open space for other arm deals as well as new partnerships with Russia in the countries' foreign relations, would Washington like to see such a catastrophic result for itself?

For example, Russia offered Su-35 fighter jets after the U.S. said it removed Turkey from the F-35 program. Moreover, Turkey and Russia have been forging relations in regards to their foreign policies since they signed the S-400 deal. I mean, while the real issue in Washington's mind is: "If a NATO member can get weapons and defense systems from Russia and develop good political relations with Moscow, what would others do?" Why would Trump think any differently?