Dead children washed ashore: The apocalyptic end of the world 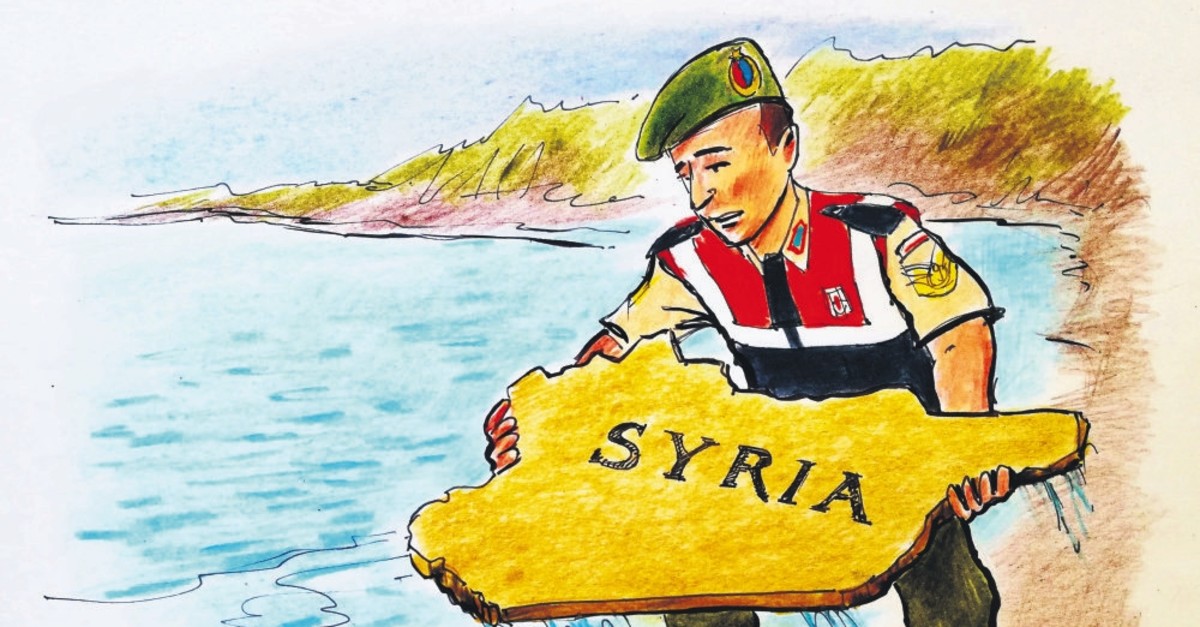 It was 10 years ago, and I was depressed, and I found myself in front of my computer starting to write something dystopian. I wasn't able to finish it, unfortunately. But I want to tell you the subject: It was about the end of the world.

I remember that the most difficult part was not writing the story; it was describing the situation of the world at the end of time. I have thought about it for days; it became an obsession. Would the land that people always fight for shatter after huge earthquakes? Would volcanoes erupt and reach cities? Would there be abandoned zones, and ghost cities following nuclear attacks? Would the air be so grey we would not be able to see the sun or the stars anymore due to major pollution? How would it be to live on Earth after the climate changes?

I was not only seeking an answer for the book but also for myself: How would the Earth look when the end of time arrived?

As you can imagine, my mind was filled with dark-futuristic books, movies and dramas. When I closed my eyes, I always saw disasters that I knew from TV – either natural or man-made. You remember that televisions worldwide spread images of a cormorant soaked in oil, agonizing in the waters of the Persian Gulf, blackened by crude from oil terminals at Saddam Hussein's order. It was 1991, and I was 11 years old. It affected me a lot, and when I grew up, I learned that it was faked; it was shot in another country at another time. And yet, I couldn't forget the image.

These are the best days for many of us, and they are the worst for many others. Some of us are very happy, and some of us are really desperate. I know that many felt sad when they saw those images. But for some others, they were not as important as dead fish. People were talking about Cecile, the lion killed by hunters in Zimbabwe, expressing their outrage on social media; but the bodies of dead children didn't get the same attention as Cecile. When I show images of dead children to my followers, some yell at yell at me: "Don't show us. They are disturbing." People were more interested in Caretta caretta eggs.

It's been three years since Alan Kurdi, a three-year-old Syrian boy of a Kurdish background drowned in the Mediterranean Sea. He and his family were Syrian refugees trying to reach Europe. They were just one family among all the other refugees that had to flee their countries, and Alan Kurdi was just one child amid the refugee crisis.

Alan's father, Abdullah Kurdi, failed to hold on to his wife and two sons after their boat to the Greek island of Kos turned over. He said his only wish was to return their bodies to their hometown and then "be buried alongside them," reports said. The family was on a tragic journey across Turkey to Europe in the hopes of joining Abdullah's sister, Teema Kurdi, who has lived in Vancouver, Canada for more than 20 years.

The image of Alan's dead body made global headlines. People talked about it; they were furious. I thought maybe this time the world could stand up and unite against the evils that force people to leave their hometowns. Then it stopped. People forgot Alan Kurdi, or other children who have lost their lives either in the sea or in conflict zones. The refugees have become scapegoats. Almost no one wants them; no one cares about them, no one has done something to stop this man-made disaster.

The humanitarian tragedy in Syria has shown us the paradoxes of globalization, perhaps more than any other event in recent history. When it comes to merchandise and capital, borders are open and welcoming. But when it comes to people, restrictions are tighter; there is abuse and refusal and people are repeatedly viewed as a threat.

It is getting worse

The situation has worsened every day since the bloody civil war started, and the number of Syrians needing urgent assistance has already passed half the population of the country, where 22 million were living before the civil war. Today, it is difficult, almost impossible, for humanitarian workers to estimate the real figures. While some have become internally displaced in Syria, the highest in the world, millions of others have fled the country and have been displaced to neighboring countries with an uncertain timetable for return. Women and children make up three-quarters of the total refugee population.

Countries neighboring Syria have reached a dangerous point. In Turkey, there are around 3.6 million Syrians, and that number does not include others who came from Afghanistan, Iraq, Yemen, Somalia, etc.

Unfortunately, in parallel with the rise of refugee numbers, reports show that mistreatment of Syrian refugees by authorities has escalated. Several videos posted on the Internet show the mistreatment of Syrian refugees, especially in Europe. These videos have been shocking. Syrian asylum seekers were beaten at the borders or they were mistreated by security guards and even forced to lie in vomit-filled beds. Not to mention reports last year showing thousands of Syrian refugee children living with the risk of abuse, exploitation and neglect as well as adults at risk of torture and threats from far-right and far-left groups.

And there are still these tragic drowning cases of refugees on migration routes to Europe. The EU, which accounts for around 30% of global wealth has accepted just a few refugees since the beginning of the conflict; it has already adopted policies based on deterrence and restriction to keep them out of Europe, rather than opening up safe pathways for protection and resettlement.

Turkey, a country that is strongly attacked for its "open door" policy for years, even by news agencies like Reuters, has tried to accomplish its humanitarian duty under the harsh pressure of Western opinion-makers and to convince the world that the situation will worsen unless instability in the region ends.

President Recep Tayyip Erdoğan said this week that the world should not be silent to the humanitarian crisis in Syria's Idlib as it will disappears like Aleppo did.

Since Turkey is now accused of not letting another refugee influx happen, he added, "Turkey is not expelling and closing its doors to refugees, but we will be happy if we can help to establish a safe zone [in Syria]."

The latest offensive by Bashar Assad's regime in northwest Syria has forced hundreds of thousands of people to flee toward the Turkish border.

Idlib, the Syrian province that is located very close to the Turkish border, is the last major opposition-controlled province in Syria. The recent regime campaign targeting the area has killed hundreds and led to the displacement of close to 500,000 so far. Turkey, Russia and Iran agreed to turn Idlib into a de-escalation zone during the sixth round of the Astana talks in Kazakhstan in September 2017 where acts of aggression are expressly prohibited. President Erdoğan and his Russian counterpart Vladimir Putin also agreed in Sochi to establish a demilitarized zone through the border of Idlib province that would be around 15-20 kilometers wide last year. The Syrian regime, however, has continuously broken the ceasefire with its frequent attacks.

Idlib is currently home to 4 million civilians, including hundreds of thousands internally displaced people by regime forces from cities and towns throughout the war-torn country. According to human rights groups, the worst refugee crisis is going to happen if Bashar Assad and his allies' attacks are not stopped.

In the meantime, the Turkish foreign minister said two weeks ago in Beirut when he paid an official visit to Lebanon that hundreds of thousands of Syrians have gone home to parts of Syria cleared of terrorist groups by cross-border Turkish military operations.

"More than 346,000 Syrians have returned to areas of Syria that were cleared of terrorists in Operations Euphrates Shield and Olive Branch," Mevlut Çavuşoğlu said at a joint press conference in Lebanon, referring to Turkish operations since 2016, as Daily Sabah reported.

"Turkey can share its experience with Lebanon on how to provide security to Syrian refugees when they return to their motherland," he added.

Since 2016, Turkey has liberated regions, including Jarablus, al-Bab, Afrin and Azaz, from Daesh and the PKK's Syrian branch, the People's Protection Units (YPG), via the Euphrates Shield and Olive Branch operations in northern Syria. Turkey made it possible for Syrians who fled the violence there to return home.

That is why Turkey has given importance to the deal reached with the U.S. on Aug. 7 to establish a joint operation center for northern Syria. After negotiations, Turkey and the U.S. reached an agreement last month to immediately implement initial measures to address Turkey's security concerns and a rapidly formed joint operations center in Turkey to coordinate and manage the establishment of a safe zone together. The safe zone in question will become a "peace corridor" and every effort will be made to help displaced Syrians return home, as they promised. However, since Ankara does not completely trust the U.S. after so many broken promises in Syria, it reiterates that it will not allow any delay concerning the plan they agreed on. Erdoğan said last week that Ankara would not accept foot-dragging, comparing it to the earlier deal with Washington to remove the YPG from Manbij.

The U.S. temporarily averted a Turkish military offensive against the YPG, the Syrian wing of the PKK, which is responsible for around 40,000 deaths in the last 40 years and designated as a terrorist organization not only by Turkey but also the U.S. But Turkey is determined to launch an operation by itself if the U.S. does not keep its promise. That is the only way to partially prevent a demographic change in Syria, to help Syrian refugees return to their country, and to be safe and secure there. But, unless the Assad regime and the terror organizations are not stopped in Syria, more refugees will surely come.