What to expect in the aftermath of Qasem Soleimani's assassination 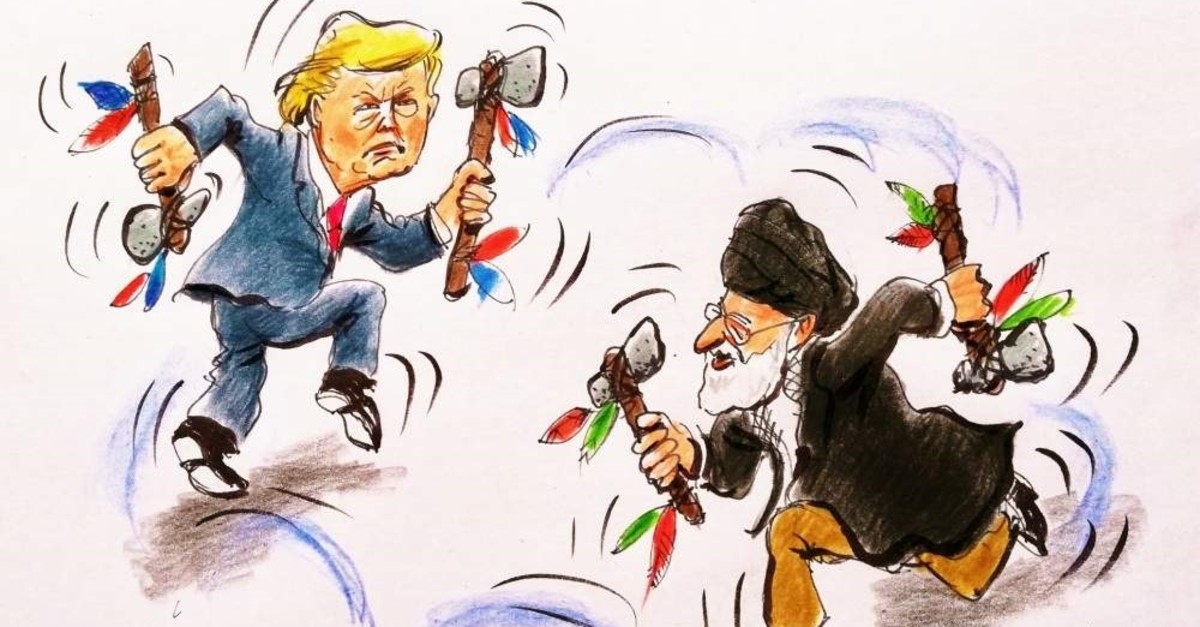 With the killing of Iran's top commander, the entire region has found itself in a dangerous situation. Predicting the future is now harder than ever before

A red flag, which symbolizes a call to avenge a person who is killed unjustly, was raised during the funeral of Iran's top general Saturday in the holiest city of the Shiites, Qom. The red flag, which flew on top of the Jamkaran mosque for the first time in history, is a declaration that Iran is ready for war.

Qassem Soleimani, the head of the elite Quds Force, which is the external wing of Iran's Islamic Revolutionary Guard Corps, was killed at the Baghdad airport by U.S. airstrikes Friday, Jan 3. Abu Mahdi al-Muhandis – the widely-used nom-de-guerre for Jamal Jaafar al-Ibrahimi, the deputy leader of Hashd al-Shaabi (Popular Mobilisation Forces), an Iran-backed Iraqi paramilitary group – was among the seven others who died with Soleimani.

The airstrikes came just a few days after Hashd members and their supporters attempted to take the U.S. Embassy in Baghdad after the U.S. carried out airstrikes against positions of Kataib Hezbollah (or Hezbollah Brigades), which is a part of Hashd al-Shaabi in Iraq.

Thousands of mourners, dressed mostly in black or in military clothes, chanted "death to America" and "America is the great Satan" during the funeral ceremonies of both leaders in Iran and Iraq, carrying the flags of Iran-backed militias that are strongly loyal to Soleimani. In Lebanon, Hezbollah supporters gathered to curse the U.S. as well.

As the coffins of top Iranian commander Soleimani and Iranian-backed Iraqi militia leader al-Muhandis were carried to their graves, the billboards on the major streets in Iran displayed the Supreme Leader Ayatollah Ali Khamenei's vows of "harsh revenge."

These events are not a surprise, as the U.S. just took the life of the most important symbol of Iran's hard power, its most effective general in the Middle East and the precious right-hand man of the supreme leader. His death has already become one of the biggest developments in the region for years, probably since the U.S. invasion of Iraq. To be honest, the assassination of Soleimani is much more critical than the U.S.' killing of al-Qaeda leader Osama Bin Laden or Daesh's Abu Bakr al-Baghdadi.

Soleimani is now a martyr in the eyes of Shiites, even though he was seen as a top war criminal by many others. There is no doubt that this assassination will trigger retaliation. This time it will not come from some terrorist organization, but it is likely that it will be planned and staged by one of the most influential countries in the Middle East, known for its asymmetric power that has already spread throughout the region.

It would be reckless to underestimate Soleimani. He was the mastermind of Iran's regional external security strategy and the heroic face of armed resistance in Iran. It's no coincidence that Soleimani held his position for 22 years. No one else was able to spread Iran's influence in the region, and protect and increase it during the fierce regional power play while the U.S. was behind Iran. Soleimani was using the Iran-backed groups and political parties in the Middle East as a tool in Iran's proxy war and playing with them as if they were cards in a poker game. His strategies and tactics were always enigmatic. His intimidating stance, his intriguing diplomacy and his secrecy behind the scenes have made him an icon for the Shiite world. He gained a mythic image among Iran-backed militias as he would join them on the front lines. The members of the groups formed lines to take selfies with him.

Gen. Soleimani had played a crucial role in destabilizing Iraq after the U.S. invasion had given control to Tehran of the country which invaded Iran during the eight-year-long Iran-Iraq war. He honored Iran while it slowly took its revenge on Iraq for the humiliating war. Lebanon's Hezbollah was transformed from a common militia into a kind of army with the main power in his hands. But Soleimani's greatest success was in Syria. He was responsible for the deaths of hundreds of thousands of Syrians. Until Russia put troops on the ground, Syrian butcher Bashar Assad could not have protected his throne in Damascus as the president of Syria without Soleimani's help. His loss is a crushing blow for Iran's power structure and will have an unprecedented effect.

Middle East experts now fear a chain of events that will lead to a regional war. Both sides are now retaliating with a series of counterattacks to the counterattacks of their opponent. If a war is at the door, then the question is, when, where and in what form will it take place?

Iran will not forget what the U.S. did, as it vowed to avenge Soleimani's death and could do so in a number of ways. But what will it do and how will it retaliate without the man who was the best mind behind the grand strategies of Iran?

Since the Iran-Iraq war, Tehran avoided facing enemies directly and preferred asymmetrical warfare using its developing proxy tools. Soleimani had loyal, experienced and talented men around him. But none of them has the abilities of Soleimani. Even Soleimani's dead body is more inspiring than his lieutenants. Could his absence make Iran take wrong decisions such as retaliating with anger, without thinking through next steps? Would Iran strike U.S. troops deployed in the region and its bases in Syria and Iraq? Would Iran lose control because of its hunger for revenge? The U.S has relatively small deployments of troops in Iraq and Syria who could be easily targeted in revenge attacks. But U.S. President Donald Trump has proved that his answer would be with fire and fury. The U.S.' killing of Soleimani after the attempt of Hashd al-Shaabi members to storm the U.S. Embassy in Baghdad has shown that Trump can use U.S. military power in unpredictable ways.

For that reason, Iran might wait to respond directly, but it could use its proxies in Iraq, Syria, Lebanon, Yemen or elsewhere against the U.S. The killing of Soleimani has left those groups chomping at the bit, and it is likely that they will strengthen their forces and political factions. Iran's allies can now make moves such as upholding national sovereignty against foreign aggression. As we saw Sunday, the Iraqi parliament voted to ask the government to end the agreement to host U.S. troops in Iraq. This is a move that would oust all foreign soldiers in Iraq. In response, Trump has threatened Iraq with sanctions.

Possible targets for Iranian retaliation might include Israel, according to experts, but this seems to be a low possibility for now. The Iran-backed Hezbollah terror group dominating Lebanon has an arsenal of tens of thousands of rockets that can hit Israel. But would Tehran take the risk that Israel would hit Lebanon back? It is unlikely for Iran to risk an all-out war that would bring another war to Lebanon, which is already in a severe economic crisis and trying to deal with its own anti-government protests.

Another front under the scope

On the other hand, the U.S. allies in the Gulf – the United Arab Emirates, Saudi Arabia and, especially, Bahrain – can be a target for Iran. To unleash its proxy power, Iran might respond by directly targeting the U.S. allies in the Gulf and their oil infrastructure. Bombings, rocket attacks and even missile assaults on ships or oil facilities, such as Iran did in September, are possible responses.

However, no matter how it responds, Iran has to contain the escalation in order to prevent a spillover into its own country. But the man of the grand strategies of Iran is now absent.

On the other hand, by assassinating Soleimani, Trump took a very big step toward war with Iran. The American assassination of Iran's second-in-command is like going "all-in" in a poker game and showing that Washington is ready for any kind of retaliation. But is it?

The Trump administration says that Soleimani was planning an attack on American diplomats and service members in Iraq and elsewhere in the region, and that Soleimani "was responsible for the deaths of hundreds of American and coalition service members and the wounding of thousands more." But, on the other hand, in the last couple of years, the U.S. had indirectly cooperated with Iran via Soleimani's loyal Hashd al-Shaabi groups in order to fight Daesh in Iraq and Syria. This indirect cooperation ended with the end of the fight with Daesh. However, Washington knew that Iran was an important factor in stabilizing Iraq. With the assassination of Soleimani, this hope is off the table.

The U.S. has had similar opportunities to kill Soleimani in the past. But the potential backlash of Iran was estimated as too great. Israel had also reportedly had chances to take out Soleimani in the past but backed off, such was the fear of Iranian blowback. A report in Haaretz Friday, citing Kuwaiti newspaper Al-Jarida, said, "Washington had given Israel the all-clear to assassinate Soleimani three years ago near Damascus, Syria, but the Israelis had demurred."

Politico Magazine wrote that Soleimani had mentioned the possibility of being targeted by the U.S., saying, "It's been one of his talking points: The Americans can find me any time, they just don't dare hit me," quoting a Republican foreign policy hand. It seems President Trump dared to do so. But the question is, how well has Trump estimated Iran's response and prepared for its reaction in Iraq, Syria, Yemen or even across the globe?

A key player has been removed from the power game, and it's impossible to avoid the fallout. Will all hell break loose or will we see a balanced reaction? Both outcomes threaten the lives of civilians, but neither country seems to care, as they never have.

In Washington, Trump has been criticized for his decision to take out Soleimani, and the absence of an experienced national security staff to advise him puts him in a difficult position. Is his team capable of challenging Iran's reactions with him, or can they dare to tell him to review his decisions and assumptions? Trump will earn votes with his bold moves, such as giving the order for the assassination of Iran's hero as well as killing al-Baghdadi. But what if Iran attacks American soldiers? Does Trump have any plan to prevent such risks? Did Trump have a broader plan or was killing a figure like Soleimani just an urge?

The U.S. is, of course, much more powerful than Iran. But since the revolution of 1979, Iran has shown that it is capable of using every vacuum, every second of hesitation, every misjudgment and even small faults. Trump's order was either just a tempting opportunity or a result of a long decisionmaking process, but there is no doubt that both countries will continue to threaten each other with words as well as bold moves. When one of them catches the other's misstep, its attack will be a dramatic win in the game. As we enter the new year, the new fire in the region has made us all say that "when one fight ends in the Middle East, the next one starts."