Syrian children at the traffic lights 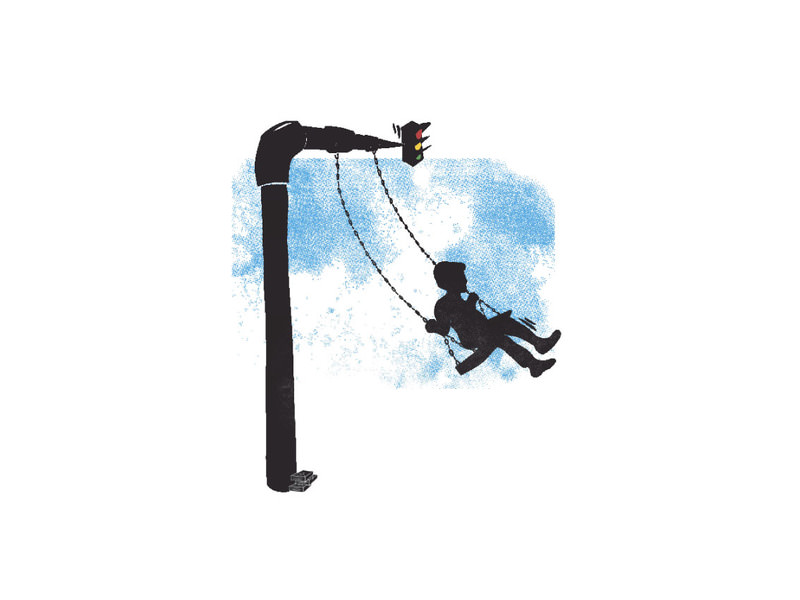 The way the Syrian crisis, being the greatest immigration wave to Turkey in the last 30 years, is handled by the country is proof that the matter is taken into hand not only in terms of its social policies or but also public awareness

It was only when Syrian refugees in Turkey started appearing at the traffic lights on the streets in Istanbul districts better-known for being occupied by the well-endowed, that high-income city-dwellers paid attention to them. They came to recognize the reality only after these people became visible at their doorsteps. Unfortunately, this behavior is true for high-income city-dwellers not only in Istanbul, but in all metropolises, who live in their own isolated world, with the "luxury" of being able to ignore real-life issues and the realities of the common world and the lack of a thorough understanding of the social issues unless they are made to face the reality at their doorstep or they fear the safety of their own family.

Those Istanbulites, who nowadays complain about the Syrian children at the traffic lights, are mostly representatives of a weird high culture, which is alien to local traditions and sanctifies luxury and security. It should be noted that this culture has a selfish and callous character, wherever it may be.

The reality of the matter is that five years ago, many Syrians fled to Turkey on foot, with only the clothes on their backs. These same people, the victims of a relentless war, displaced from their land and homes, are now being perceived as a threat to the normal order simply because some of them are begging and asking for money at the traffic lights and on the highways. Did these Syrian children happen to suddenly pop out of nowhere at the traffic lights of the high-income districts of Istanbul? Are they open threats to the public order in Turkey? Let's have a look at the systematic and social dynamics of the mass migration of the Syrians in Turkey and the institutional burdens of Turkey for the population it hosts.

Where were the Syrian children before the traffic lights?

Turkey witnessed mass migrations to Germany and Europe in the 1970s, but never again in the following periods. Indeed, during regional crises like the forced migration of Turks from Bulgaria and the First Gulf War, Turkey admitted around 400,000-500,000 refugees. We became a transit country for Iranians after the Islamic Revolution and during the Iran-Iraq War. Having achieved economic growth to become the 17th largest economy in the world and a member of G20, our country was still a transit country along migration routes until roughly five years ago (March 2011.) Following an uprising that erupted in Syria at the time, the first mass migrations in decades began. Turkey did not have the legal, social or economic infrastructure and experience in this field to meet the massive systematic needs.

Also those leaving Syria first were people from the upper income level. Most had economic means and cultural ties with the West. They preferred countries like Canada, the UAE and Qatar, which accept migrants relatively readily. Turkey was not the country of first choice for well-off Syrians.

These first immigrants, who spoke foreign languages and had passports, chose Turkey usually as a place of temporary residence. And they lived on assets held in international financial centers. Syrians who hoped to return to their country one day and who had not lived in or had ties with the Western or faraway countries mostly chose Lebanon. The reason why they preferred Lebanon, which is a much smaller country compared to Turkey and can offer limited opportunities, was that Syrians could easily obtain refugee status and register with the United Nations agencies: Most importantly, Arabic is spoken in Lebanon, too. There was no "language problem," one of the biggest challenges facing refugees, in the case of Lebanon.

When the crisis escalated, the first group of refugees came to Turkey usually with their vehicles. Later on, the lower middle classes also began to arrive, bringing considerable assets with them. The government could not predict how long the conflict would last and lacked the infrastructure and administrative mechanisms necessary for managing that huge influx. There was a strong belief that Bashar Assad would be toppled and the conflict would come to an end soon.

However, the critical threshold of 100,000 refugees was passed in the same year and over the course of four years the total number of refugees has climbed to 2 million. Nowadays the migration seems to have stopped as Syria is almost completely abandoned.

Turkey has to open its border as required by international law. Turkey adopted an "open border" policy, while European countries accepted very few refugees and provided housing to only a few thousand. In fact, they led to unrealistic expectations about housing and jobs among Syrians and caused many of them either to die or lose their savings to human smugglers while trying to go to Europe through the Mediterranean illegally. In the four years that have passed, no country, including U.N.-assisted Lebanon, can equal Turkey in this regard. Today, not only Syrians themselves but their relatives in other countries also want to come to Turkey.

Turkey has emerged without a stain on its reputation from this four-year experience, spending more than $5 billion from the public purse and receiving negligible foreign assistance. But this experience proved valuable in social and political aspects. With the passage of the law on "Foreigners and International Protection" in 2014, the authority to evaluate applications for asylum requests was taken from police departments and given to the Directorate General of Migration Management. In other words, the state ceased to look at asylum requests from the perspective of "security and potential crimes," adopting a human rights-based approach.

We use the term "Syrian refugees" but Turkish laws do not allow Syrians to obtain "refugee" status; because only migrants from Europe are eligible for refugee status due to a policy of "geographical reservations." Syrians are currently given the status of guests and can get ID cards, basic and urgent health services and work permits upon application. Thus they enjoy protection in line with international laws.

The first groups of desperate Syrians were not supposed to settle in big cities. They were housed in container and tent camps set up by the Prime Ministry's Disaster and Emergency Management Directorate (AFAD). There was an intention to keep them in these places of temporary residence until the end of the conflict.

But as the number of refugees increased to 2 million, temporary places of residence could not keep up. The camps, where 350,000 currently stay, feel like an open-air prison after a while due to the social conditions that create social problems.

Turkey has drawn the attention of international community to the issue of establishing a safe zone along the border and building mass housing or perhaps towns there. But no consensus has yet been reached.

Turkey based its strategy on the ending of the civil war and the return of Syrians. However, we should also keep in mind that as Syrian children born in Turkey reach school age over time, we will face a new reality and that the education of these children cannot be delayed for long. So we need to produce new solutions.

Besides, the return of many Syrians is related not to the end of the conflict but the healing of wounds and rebuilding of their country. And even that may take about 10 years. Again, some of those Syrians who came here four years ago, settled and created a new life, will never go back at all. What to do then?

1. The Syrian problem has emerged just across our border and is the greatest migration wave in the last 30 years.

2. The status of "temporary guest" Turkey grants to Syrians has no equivalent in international law. Syrians expect from Turkey a system that gives them a solid and unambiguous status with mutual rights and responsibilities.

3. Such a status would also relieve Turkey regarding issues like tax collection and provision of public services. Again, guaranteeing the right of asylum would save Syrians from worries.

4. As a stable and large economy in the region, Turkey will be more of a destination than a transit country in the future. When the immigrants accepted from neighboring countries and the Syrian issues are thought together, there is an urgent need for a ministry of immigration that will formulate social policies and do the administrative follow-up. That ministry would take measures at domestic and international levels against the possibility of massive migration and explain to the world about the problems facing Turkey.

5. Syrians have brought to Turkey a new and dynamic labor force. In fact, we should also keep in mind that some Syrians, whom we see as a burden on the state, have brought their assets with them. Again, they have the potential to create a new economic dynamism by working, producing and consuming. However, perceiving this new labor force as a cheap and exploitable resource would not be humane. There is already a "minimum wage for Syrians" that is around $150 per month. Ensuring social security along with a work permit is crucial for fairness and equity.

6. The same is true of home rental prices. Let's emphasize the advantage of owning a house and note the unfairness of renting a house at much above the market rate.

7. There is an urgent need for educating children who are at school age but do not get an education. The language problem should be overcome by devising a convenient and humane solution.

8. The civil law should be vigorously implemented and custody of children should be properly awarded in cases of divorce. Mistreatment of minors and elders and the abuse of Syrian women should be absolutely prevented. This can be achieved through both social policies and heightened awareness. Turkey must take measures in this regard before it is too late.

9. The needs of Syrians are met by AFAD, nongovernmental organizations, municipalities, and through individual aid. Turkey has been left alone by the international community. Unfortunately, Turkey is not good at explaining its arguments to the world. Turkey's bureaucrats and its diplomatic missions in the West fail to adequately understand and explain its vision. If Turkey wants other countries to share its refugee burden fairly, it needs to explain the issue to the world clearly, with the help of its academia, diplomats and civil society. The complaint the "International community has left us alone" neither solves the problem nor provides any relief to Turkey.

10. It is possible that people will accuse Syrians, just like Europeans do, of "coming to abuse our welfare system" and the issue will turn into a case of xenophobia. We need to avoid using racist language and warn those who do. All sorts of "othering" should be avoided.

11. We should think of what we can do to facilitate the adaptation of the Syrians. We should produce a series of projects to help us live together, ranging from job training to language courses, from building new collective housing to add Arabic/Kurdish words to signposts in cities.

12. And finally, we must ask ourselves "Has our homogenous nation-state, which in reality had never really existed and which had only glossed over our differences, come to an end?" Now is the time to make a new constitution.