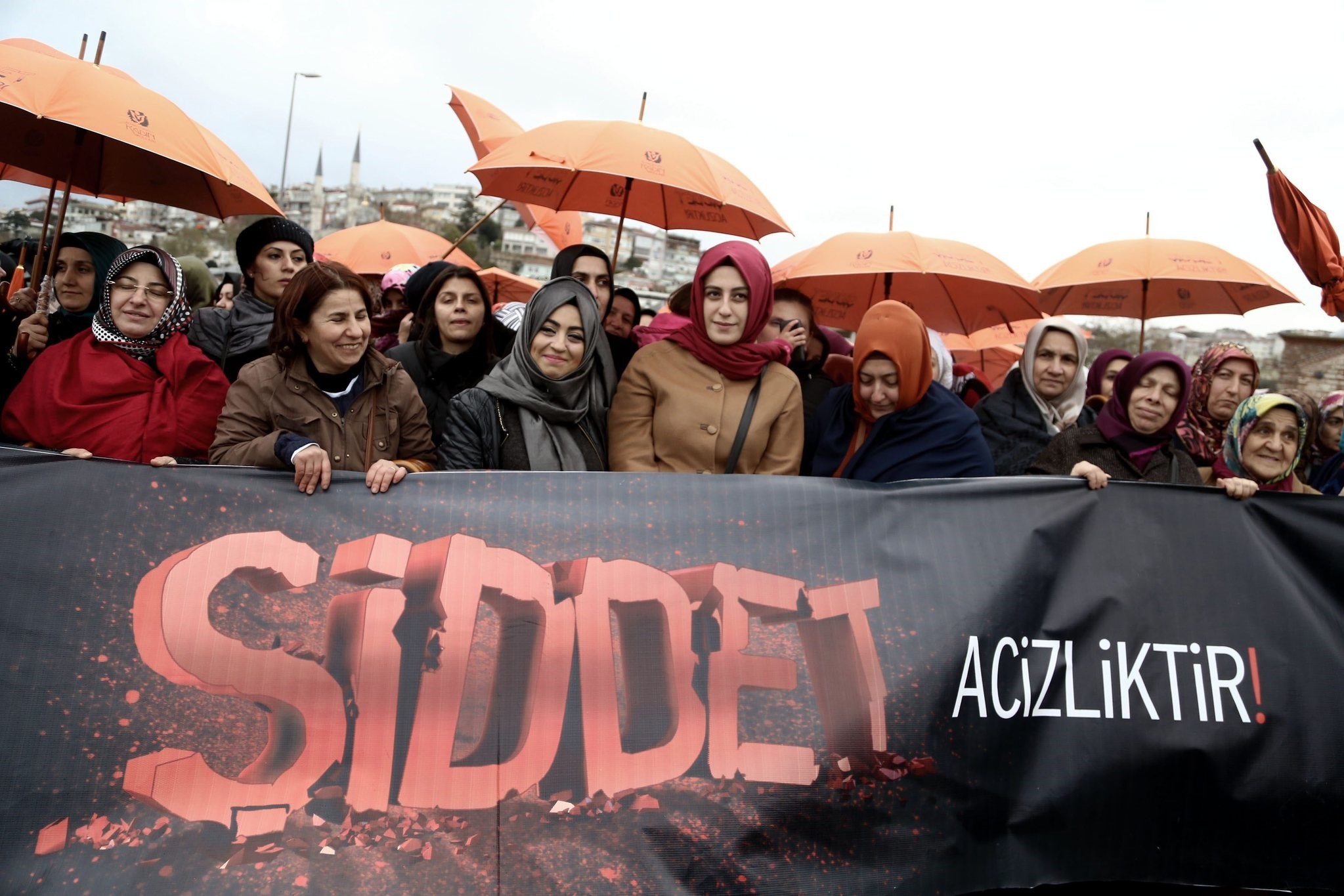 Female members of the AK Party hold a demonstration in u00dcsku00fcdar, Istanbul against violence. The placard says, u201cViolence is weakness.u201d
by Meryem Ilayda Atlas Nov 24, 2016 12:00 am

An incredible socioeconomic transformation has taken place in Turkey over the past 15 years. Maybe the most important sign of this change was the increase in the political and public visibility of religious/conservative women as social agents.

Religious women, pushed toward the fringe by secularist prejudice and modernity, succeeded in breaking through to the mainstream as an agent of opposition, defiance and guidance, not a simple actor. They suddenly became a force to be reckoned with.

The latest example of this power was evident in the Justice and Development Party's (AK Party) decision on Tuesday to withdraw the bill on underage marriage.

Until 2005 in Turkey, a rapist could escape punishment if he married the victim. Moreover, the crime carried a sentence of five years in prison, nowhere near what it warranted. A rapist could also benefit from a range of reductions in the final sentence.

It was in that year that the AK Party amended the law, banning the escape clause that involved marriage, while increasing the penalty to eight years, before further increasing it to 16 years in prison in 2014.

"Good behavior" was also removed as a factor in the determination of the sentence in trials involving rape or sexual assault. Such improvements were all made under AK Party governments, with the significant involvement and support of women within the party's grassroots.

The controversial bill was withdrawn from the Parliamentary Assembly to the Justice Commission before any discussion concerned an amendment that focused on partners in jail for underage marriage. It aimed to address the grievances of around 3,000 couples, whose marriages were considered socially acceptable, with children.

However, the bill prepared by a group of bungling male AK Party deputies did not even come close to reflecting this objective. The definition of the offender was vague, the definition of the crime was inadequate and the text did not set age limits on marriage at all.

One thing needs to be said loud and clear. This bill, which was covered extensively by the international media, was not a "rape law." It was only a badly prepared bill with no attention paid toward the consequences. Its text could have resulted in a dramatic increase in the number of victims and could have provided significant benefits for abusers.

Almost every section of the society negatively reacted toward the proposal. Civil society, NGOs, journalists and the AK Party's base all lambasted the bill. Most positive responses to my Twitter messages objecting the bill as it stood came from the AK Party's female members.

A political party that has been on the forefront of efforts to educate children, through introducing 12-year compulsory education, and increasing female participation in education through special scholarships for girls should not have been part of such a bill. The most furious opposition to such an attempt to change the law with the feeble argument that it reflected "societal facts" while countenancing to child marriages came from the women of AK Party. AK Party deputies, journalists and NGOs sympathetic to the ruling party policies were among the bill's most stalwart opponents.

The most vocal opponent of the bill was the Women and Democracy Association (KADEM). It objected to the bill as it stood and presented policymakers with alternatives. KADEM is an association that often voices its opinion on AK Party policies and usually cooperates closely with the government. Obviously, it was also KADEM's responsibility to take the lead when it thought what was done was wrong. KADEM's objection created significant commotion, allowing other women's groups to find their voices.

The result: The bill has been withdrawn.

Women in Turkey have incredible political influence. During the AK Party era, conservative/religious women found the time and space to take their place in the center of discussions. They have earned a place at the table, from which they used to be marginalized. Utilizing their sensitivities, they have also become the voice of compassion, developing a new and strong political voice. Women, those who refuse to surrender to the masculine political machinery; those who raise their voices in Parliament and every other public space, those who campaign for what they believe is right via tweets or any other means, are the beneficiaries of this process.

The losers are the old cogs in the decrepit masculine political machinery who were blinded by the parliamentary lights that made them forget about the little girls and why they were there in the first place.
RELATED TOPICS