Pro-Trumpism in Turkey: An expectation of fresh air full of reservations 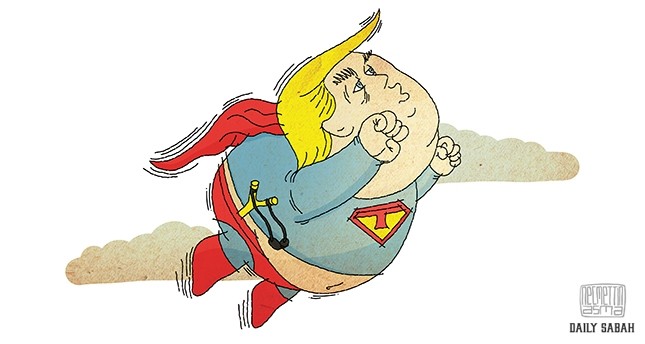 Trump's election as U.S. president raised hope that he will stimulate a shift in U.S. policy toward cooperating with the country's allies rather than terrorist groups and facilitate serious measures to be taken against FETÖ activities and the group's leader in the U.S.

Donald Trump's presidency is still little more than a nasty joke for many in the United States. Just before the inauguration, the expectation of last-minute surprises of every kind foretells the essentially irrational character of U.S. politics to come.

While the most bizarre election in history hooked millions to their televisions around the world, very few expected a Trump victory or the emotional earthquake it would trigger among the so-called intelligentsia. The New York Times mobilized its resources to wage a campaign of hate against Trump, while the CNN's coverage of the post-election period is a lesson in hypocrisy.

In my recent visits to the U.S., I witnessed how uneasy my Muslim sisters and brothers were, somehow irritated and extremely worried about the coming Trump presidency. After a campaign dominated by xenophobic and Islamophobic rhetoric, it is no surprise that most of his cabinet picks are known for their anti-Muslim attitudes.

During my time in Chicago, Washington and New York, I was repeatedly asked why and how Trump's presidency could be welcomed in Turkey, a Muslim country. This is a country with an "ummah" consciousness at the highest level, with a generosity of spirit that welcomed 3 million Syrian refugees and that instituted an open-door policy for all those fleeing war zones across the region. Yet, interestingly, Trump's election victory has given rise in Turkey to the idea of not merely "let's wait and see what he does," but an atmosphere of genuine hope and positive expectations as well.

How did this come about? Are Turkish policy makers and the public blind to what everyone else sees? How can they support an anti-Islam businessman with no experience in office? This point is more than just a curiosity.

A very brief answer to this question is that the pro-Trump discourse in Turkey is full of broad reservations. Turkey is a society seeped in a history of multiculturalism, situated in a region that unites rather than divides cultures, religions and ethnicities. Its millennia-long history is proof enough to show that there is no room to applaud bigotry, hate speech or misogynists. No such rhetoric can resonate with Turkish society.

However, Turkish society is also sick and tired of the blatant hypocrisy of the outgoing U.S. administration on Syria, a campaign of poisonous attacks against Turkey disguised as editorials or news reports by various media organizations, especially the New York Times. For Turkey, the eight years of outgoing U.S. President Barack Obama was a period of missed opportunities, blatant lies and a supposedly strategic ally providing armed support to terrorists.

Pro-Trumpism in Turkey does not reflect Turkish society's respect for the man's outstanding abilities, but signals Turkey's desire to turn a new page in ties with the U.S. Trump personifies Turkey's hope that the bankrupt and disappointing foreign policy of the U.S. establishment will not only be altered, but overhauled in its entirety. Trump's victory is seen as an encouraging sign that the American people also want something different and that the incoming president will bring a breath of fresh air to bilateral ties, which are close to collapse.

First of all, the Obama administration failed to follow an active and effective foreign policy, and the U.S.'s proclivity to wage proxy wars via terrorist groups like the PKK-linked People's Protection Units (YPG) in Syria rather than cooperate with its historical allies and states in the region has caused significant hardship for all. The Turkish public's anger and feeling of being stabbed in the back caused by the open support extended by the U.S. to the Syrian affiliate of the PKK terrorist group cannot be exaggerated. The U.S. has waged a proxy war in Syria at the expense of harming bilateral relations with Turkey, an ally that is the only Muslim democracy in the region. Openly backing a non-state actor, the Democratic Union Party (PYD), to the detriment of an ally's interests and security in the region has exacerbated the chaos in the region and also left Turkey alone in its war on terror. The confusing policies and vagueness of the Obama administration's strategy for the Middle East and failure to take action when red lines – evidently drawn with disappearing ink – were violated again and again caused fatigue in Turkish society toward its strategic ally.

Another huge disappointment is the public negativity toward Turkey designed by media in the U.S., diplomats, politicians and pundits. People in Turkey really paid an inordinate amount of time and effort to understand the cause of this hostility and antagonism. Fabricated news on Turkey, biased reports and factual mistakes that dominate mainstream media in the U.S. are the direct cause of the increasing anti-Americanism in all sections of society.

Turkey hates political correctness as a tool of imposing interests

On the morning of Nov. 9, 2016, some jubilant Trump voters openly celebrated the end of the era of political correctness, seeing the concept not as an asset, but a burden for honest interaction. And they were right.

The era of political correctness and general liberal values can be characterized as all talk but no action. In the last decade, we have all heard the leading lights of the establishment around the world talk about rights and freedoms, multiculturalism, globalization, equality, building international mechanisms to stop wars and conflicts, establish peace and care for the disadvantaged and oppressed, while condemning racism. However, then the time came to take action and silence ensued. While all these principles look good on paper, they only served to perpetuate the unjust established order to the sole benefit of the privileged.

Almost everyone knows that Obama's often-praised eloquence hid the fact that he served a select number of interest groups. The inability and inconsistency of the Obama administration's political correctness resulted in consequences unlike those from previous American administrations. Hate speech is still an issue. Gun control and injustice against black Americans are still issues of significant importance. Obama's domestic policy failures echo abroad. Trump's election is seen as the domestic reflection of the bankruptcy of the American elite at the international level. Irrespective of his many despicable remarks throughout the course of the election campaign, Trump was seen as the more honest of the two candidates. Trump pledged to build walls, Hillary Clinton promised to build bridges. The American establishment is no longer credible, neither for Americans nor for the world at large, including Turkey.

Obama's red line on the use of chemical weapons in Syria was crossed years ago. Bashar Assad's regime used chemical weapons on civilian targets on three separate occasions, according to a report issued by the United Nations Organization for the Prohibition of Chemical Weapons (OPCW). The New York Times has accused Trump of ignorance and the inability to grasp the wisdom of diplomacy. Throughout its eight years, the Obama administration, with the help of the Washington establishment, displayed arrogance and a lack of courage and failed to heed its allies' advice numerous times, resulting in many formerly optimistic people across the region and around the world turning their back on Obama's policies, turning the concept of the international community into a hollow notion.

My last and most important point on why those in Turkey are generally supportive of Trump's victory is his unequivocal condemnation of the bloody coup attempt on July 15, 2016. He was among the first to denounce the Gülenist Terror Group (FETÖ) putsch and advised the U.S. to take immediate action against the leader of FETÖ and extradite him to Turkey as soon as possible.

It would have been too much to ask Hillary Clinton, Trump's Democratic challenger, to do the same if elected, considering that she was one of the main recipients of political donations in the U.S from Fetullah Gülen's network. The expectation that Trump's war against radicalism will include FETÖ and the belief that this terrorist group will not find suitable ground to flourish under the Trump administration strengthened pro-Trump sentiment in Turkey. The same group would have been viewed as a harmless education and religious service provider with a moderate Islamic bend if Clinton had won on Nov. 9. This was one general fear the Turkish public felt.

To conclude, it should be noted that the Turkish public also shares the general concern of Muslim-Americans of the rising Islamophobia in the U.S. We sincerely hope and pray that things said in the heat of the campaign will not be reflected in the Trump administration's policies in the next four years. Trump's election as U.S. president raised hope that he will stimulate a shift in U.S. policy toward cooperating with the country's allies rather than terrorist groups and facilitate serious measures to be taken against FETÖ activities and the group's leader in the U.S.