Presidential system will remove the key log in Turkish democracy 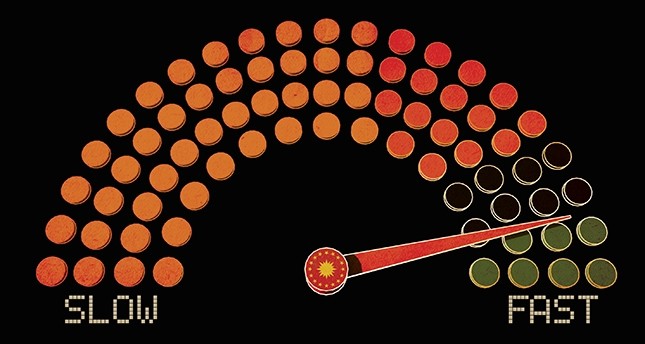 Simply put, the upcoming constitutional change will upgrade the governing ability of the Turkish state by making the separation between the legislative and executive powers more clear, leading the country to a healthier democracy

These days, a frequently asked question seems to be, "Why is Turkey considering a change of system of government?" After Parliament's approval of the constitutional reform that will pave the way for a presidential system, the public also began to ask what the new system will entail. What will be the system's benefits? How will Parliament function in its new capacity and more crucially, how will the checks and balances work to protect democracy?

Every governmental system has its advantages and shortcomings. How the system handles all of its weak points and compensates for them in favor of democracy has been one of the biggest challenges faced in the history of Turkey.

In Turkey's current parliamentary system, the party that holds the majority in Parliament controls the legislative process as well as the prime ministry, the executive branch. This poses an immense conflict of interest as well as predicaments linked to intra-party interests. Dynamics within the ruling party usually result in short-term interests coming to the fore during the selection of cabinet members.

One key issue that needs to be addressed is why Turkey needs a system change, posing the question: what aspects of the current system were criticized by the public and parliamentarians? The parliamentary system used in Turkey is plagued by a political stalemate. The twofold characteristic of the system entailed the perpetual risk of a potential stalemate between the prime minister and the Cabinet on the one side, and the president or the head of state on the other. To compensate for this risk, the power is usually tilted in favor of one, which has frequently been toward the Cabinet. However, despite having been cut off from the political mechanism, the president continued to retain considerable authority over executive consent as the highest representative of state.

The power of the president, as formulated by the 1982 Constitution, which was prepared by the architects of the 1980 coup, placed the head of state above and beyond politics, with a far-reaching authority to shape very strategic decisions as well as the execution of legislation. While supposedly isolated from day-to-day politics, in actuality, the president has the power to intervene in political developments whenever he or she deems it necessary, usually to the benefit of various interest groups. Governments in the 1982 Constitution were accountable to the public without actually having the power to serve it. Real decisions were taken by power brokers hiding behind the system, the military, the judiciary and others personified by the president.

This is what we now call a system of tutelage created by the 1980 coup leaders and exploited to perpetuate the subservience of politics.

Another aspect of the spirit of stalemate ingrained in the current system is the lack of safety valves, which in a democratic system means free and fair elections. The government is in charge of the legislative process, but once it fails to perform its duties, elections need to be called. However, if the opposition do not have the majority to push the ruling party into holding elections, the government can ignore the timetable and govern indefinitely if necessary, despite having lost all effectiveness. Such stalemates can last a considerable amount of time.

For presidential systems, it is important to create mechanisms to overcome potential stalemates between the legislative and executive branches to ensure the government's smooth functioning. The constitutional reform bill to be put to referendum in April sets a definite timetable for simultaneous regular elections for the president and Parliament to remove the risk of confusion. No wonder the 1990s were called the "lost decade," considering the fact that one ineffective coalition government replaced another in inconclusive elections. Reforms see simultaneous and properly scheduled elections for the president and Parliament to ensure continuity and the effective functioning of the legislative and the executive branches.

Another mechanism for the democratic functioning of the system is the introduction of the concept of mutual dissolution. The president will have the power to dissolve Parliament, but it will also entail him or her relinquish office as concurrent elections will be held for both branches. Giving the president the unilateral power to dissolve Parliament would have put the functioning of the system at risk while going against the spirit of the reform.

As the president will serve a maximum of two terms in office under the amendments, he or she will resort to using the power of dissolution only in an emergency. Parliament retains the right to call early elections only if three-fifths of its members endorse the measure.

Parliament has the power to approve the budget prepared by the president. If it refuses to back the president's budget, a temporary budget bill will be introduced to prevent disruptions in state services while negotiations between the two branches continue.

Another provision allows Parliament to reissue, through a simple majority, bills the president has vetoed. All presidential systems contain rules that make it possible for Parliament to override a president's veto, but the majority of Parliament needed to do so changes from country to country. It will be enough for Parliament to overrule the president's veto with a simple majority, which constitutes the minimum in presidential systems practiced by many in the western world. The constitutional amendments proposed will place Parliament at the center of the legislative process and increase its strength against the executive branch. From a constitutional perspective, this gives Turkish Parliament more power against the president compared to the system used in the U.S. conversely, the president's power to veto laws Parliament passes with a simple majority acts as an effective counterbalance. Parliament's supervisory powers, such as launching inquiries, questioning officials and holding general debates are left intact. The scope of parliamentary inquiries will broaden; however, the mechanism of the motion of censure, which does not exist in presidential systems, will be removed from the Constitution.

In the new system, no representative from the executive branch can participate in a parliamentary inquiry, which is among Parliament's supervisory powers. This represents a real separation of powers in contrast to the fusion of legislative and executive branches utilized in the current system. Parliament will then fully and independently be able to exercise its supervisory authority.

While some may argue, and actually have done so, that the changes mean a regime change or the replacement of the Constitution in Turkey. In fact, neither is correct. What we are going to vote for is a new system that will continue to exist within the confines of the 1982 Constitution. Unfortunately, Parliament failed to establish the necessary consensus to change the system by completely replacing the 1982 Constitution. Nevertheless, these amendments represent a critical step in terms of redefining the relation between the state and society.

The parliamentary system as practiced in Turkey was usually a shield exploited by the self-defined "guardians of the Republic" to the detriment of democracy as well as the sociological and philosophical legitimacy of the system. Hence, changes to the governmental system should be understood as a step that goes far beyond the revision of the legislative and executive branches, and seen as a move toward instituting a pluralist democracy.