Policy or propaganda: How will the Turkish state tackle the Kurdish issue? 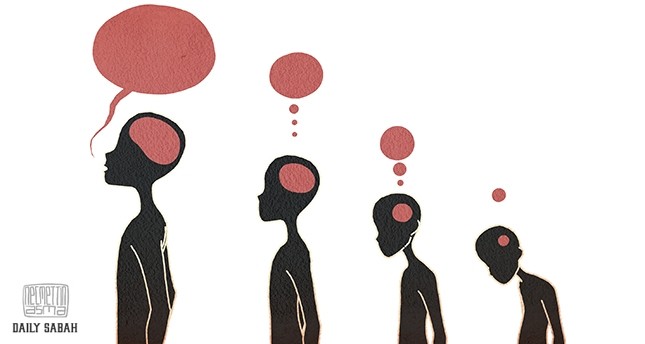 Turkey's more than four-decade-long PKK terrorism problem went through a low-conflict period between 2011 and 2015 when the "reconciliation process" was launched to establish peace. The process ended after the PKK resumed its terrorist attacks on July 7, 2015, exactly at a time when Kurdish politics seemed to have reached a peak, with a party supposedly representing Kurdish citizens winning 80 seats in Parliament after passing the 10-percent election threshold, a first in pro-Kurdish politics in Republican history. Having squandered a historic opportunity, Turkey's perennial Kurdish question entered one of its periodic vicious circles of ascending violence. The process, along with hopes for peace, as President Recep Tayyip Erdoğan said, is frozen.

In the meantime, everyone is trying to establish for themselves the best bargaining position before the inevitable peace negotiations resume. The question now is not when, but how they restart and who will the state talk to.

NOT THE SAME STATE THAT WAS IN POWER IN THE 1990S

The current Turkish state structure has done its utmost to distance itself from what was done in the 1990s. But still, the Kurdish public continues to perceive it as a monolithic tormentor still guilty of ultra-nationalistic and aggressive discourse. Many Kurds are perfectly aware that the state is not at all the same as the one in the 1990s. However, as a teacher in Silopi told me, the state is doing well, but it fails to articulate its intentions properly. It does well but talks badly. This Kurdish teacher works for the Turkish state and openly voices his opinion that he prefers the state to the PKK without question. However, what does he mean by talking badly?

Such sentiments are common among Kurds who support the ruling Justice and Development Party (AK Party) and who also openly back the constitutional changes that will pave the way for a presidential system. However, they cringe when they encounter ultra-nationalistic rhetoric that is openly anti-Kurdish and generally equate all Kurds with terrorism. In neighboring Cizre, another public employee talked about how cheated and heartbroken he felt when he saw on TV proposals about how to tackle the threat posed by the PKK. The village guard system, which aims to arm villagers in rural areas to protect their area from PKK encroachment, is for the most part abused, he said, adding that these village guards exploited the state and most joined up to hide their illegal activities. "These people represent neither us, nor the state," he said.

Obviously, all village guards are not in it for their own benefit, but peace-loving Kurds who hate the PKK are also against some obviously criminal people speaking in their name.

Locals believe the state utilizes the wrong elements to reach out. Top officials, from the president to ministers, constantly express their conviction that the PKK and Kurdish people are not one and the same and profess their respect for the demands of our fellow Kurdish citizens. Kurds appreciate the sentiment but feel that the government does not practice what preaches.

A state official told me that developing a new round of the reconciliation process is no longer a priority for the Turkish state, unlike back in 2012. As she admitted to me, the current ultra-nationalistic rhetoric, coupled with language dominated by martial statements, compels Kurdish people to remember the bad old days of the 1990s. However, at a time when Turkey is bordering two failed states, Syria and Iraq, and has survived a bloody coup-attempt, the priority is to address the vulnerabilities that have appeared in the military and the bureaucracy. Turkey also needs to fight the Western notion of "radical Islamic terrorism," which is a term anathema to everything Islam truly represents. All these other problems did not so much replace but interrupt efforts to resolve the Kurdish problem.

When I ask some AK Party officials about their thoughts on the resumption of the reforms on rights and freedoms of all communities, including the Kurds, I get the impression that their attention is directed at the broader region, not specifically at the domestic concerns of Kurdish citizens.

Kurds, along similar lines, believe the substantial improvements they have already won are just steps in earning much more. They do not fear risking their existing rights to win new ones. The Kurdish question had never been a domestic matter. It always included regional actors who intervened whenever something not to their liking happened. Since the Arab Spring and the following chaos, more global actors have entered the scene. The matter transformed into something broader than the social, political and cultural demands of Turkey's Kurdish citizens, and the language now used reflects the new situation and responses to it.

The PKK's return to terrorism after June 7, 2015, became a watershed moment, after which the Turkish state focused its attention on militaristic solutions to PKK actions and the bureaucratic state of mind was replaced with security measures. The frustration evident among Kurds with the PKK's decision to disregard peace for its narrow interests is tempered only by the bombastic rhetoric they see on TV.

A journalist experienced in the matter forcefully rejected any semblance between now and the 1990s. He cited the "cities of attraction project" that aims to transform urban areas in the southeast by channeling serious amounts of funds as an example of Turkey investing in Kurds more than ever. He said the Turkish state was notgood at promoting what it was doing, arguing that if it had been able to do so, it would be garnering more admiration for the legendary humanitarian undertaking of sheltering more than 3 million refugees. When asked why people kept mentioning the 1990s, he just gave the example of Scottish demands of independence from the U.K.

"Demands on identity and ethnic issues are somehow never-ending. As you can see, the state invests more than ever, but it results in opening itself to demands for more. The Kurdish question is not a matter of investing or standard of life issue. How else can we explain Scotland, one of the most developed regions in the world, seeking separation? This is the nature of the question we now face. State actions may no longer satisfy Kurds."

Locals I spoke to echo such opinions. Decades of pressure from the Turkish state, during which they could not speak or write in their own language and said that there was no such thing as a Kurd; it's now too late. Kurds can now speak their own language, watch their own TV channels, listen to their own radio stations and read their own books. Kurdish singers are everywhere, and Kurdish literature can now be studied in universities. And still, Kurds are still not satisfied. Why? "Because it's now too late. If all this had happened in the 1990s, it would have been a miraculous occasion. The state was too late to react to our demands" some locals replied.

During the reconciliation process, there were serious criticisms by pious Kurdish groups for limiting negotiations solely to PKK-linked Kurds. There were calls for recognition accorded to Kurds supporting neither the AK Party nor the PKK. Such groups, mainly the Free Cause Party (HÜDA-PAR), asked for more diversity among the Kurdish representatives in any possible process in the future. In a question about how he sees the future of reconciliation, the HÜDA-Par representative painted a bleak picture of hopelessness mixed with concern over PKK violence. Constantly threatened by the terrorist group, he also sees AK Party representatives as unwilling to listen to anyone. "Tension is high, and there is no ground for hope. No one is listening to each other in this conflict-ridden environment."

A majority of Kurds now live in urban centers, enjoying a higher standard of living and travelling more than ever. With such a transformation comes conformism where people want to send their children to better schools, enjoy nicer holidays and have better service from their local governments. They oppose the building of ditches by the PKK with the help of municipalities. No wonder there was a total lack of objection to the suspension and arrest of dozens of mayors, from the Peoples' Democratic Party (HDP) and the Democratic Regions Party (BDP), for aiding and abetting the PKK. Still, no one should forget the fact that Kurdish youth are more literate and politicized than ever. It is crucial to pay attention to the balance of investment and demands. The state may no longer behave as in the 1990s, but the sociological structure has also been transformed since then. Turkey is more educated and richer. Kurds demand to enjoy the fruits of the growing Turkey as equal citizens. And they do this while distancing themselves from PKK terrorism.