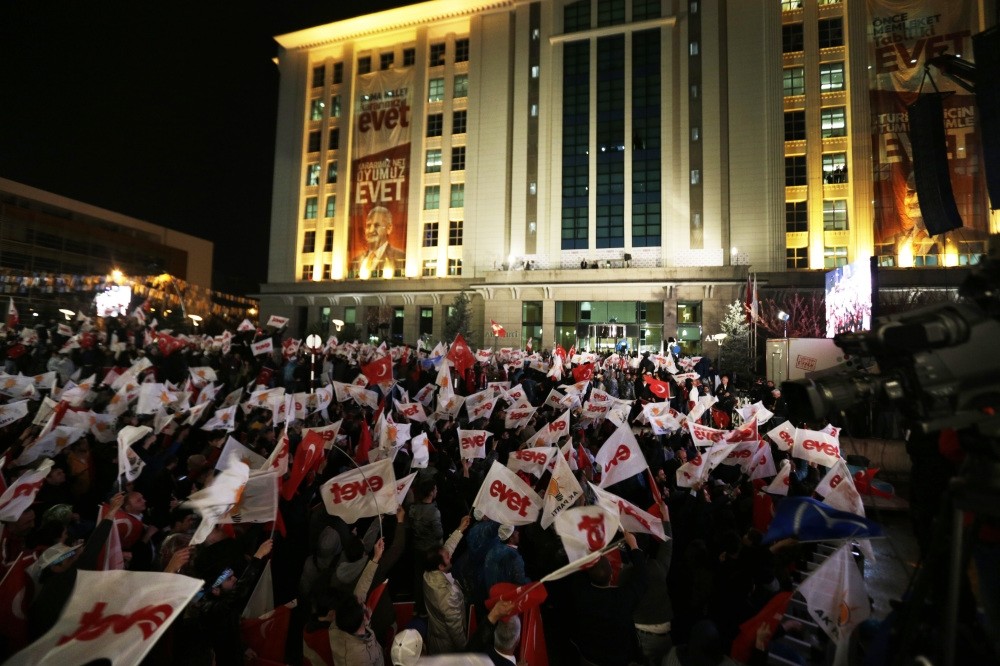 Turkish people waving 'yes' flags to celebrate the referendum victory of the 'yes' campaign on Sunday in Ankara, April 16.
by Meryem Ilayda Atlas Apr 17, 2017 12:00 am

Sunday's results is clear proof that Turkish citizens of Kurdish origin supported the proposed changes, showing they are not enemies to Ankara as the pro-PKK HDP insistently has lied about

Turkey yesterday witnessed a free, fair and peaceful referendum on changing the constitution to replace the system of government from a parliamentary to a presidential one. During the campaign, the ruling Justice and Development Party (AK Party) and the Nationalist Movement Party (MHP) joined forces. However, one striking outcome of yesterday's results was that despite full backing from its leadership, MHP grassroots overwhelmingly voted against the constitutional changes.

The MHP, as indicated by the referendum vote, is a party without much discipline. While the leadership decided to support a particular outcome, it failed to persuade its supporters, which should be described as sympathizers rather than partisans.

The AK Party preserved its base of support from 2014, when Recep Tayyip Erdoğan was elected as president. Another important result was the significant support for the "yes" campaign from provinces that had backed the Peoples' Democratic Party (HDP) in the Nov. 1, 2015 general elections. These results will definitely have medium and long-term consequences for all concerned. However, I would like to dissect the results on a provincial basis.

The HDP overcame the 10 percent threshold and entered Parliament after the last general elections on Nov. 1, 2015. From the 14 provinces in the east where it was dominant and where it campaigned for a "no" vote, Batman, Diyarbakır, Bitlis, Hakkari, Iğdır, Kars, Mardin, Muş, Siirt, Şırnak, Tunceli, Van, Urfa and Ağrı, 10 voted against the constitutional changes in yesterday's referendum. However, four, Muş, Urfa, Kars and Bitlis, voted for the reforms. From all these provinces, Urfa deserves a closer look. Its population is largely conservative, in line with the AK Party electorate. In the Nov 1, 2015 elections the HDP had received 28 percent of the provincial votes. However, a look into previous elections gives a clearer picture. In the June 7, 2015 general elections, the AK Party received 48 percent of the votes compared to the HDP's 38 percent. This shows the HDP has serious potential in the province. More than 70 percent of Urfa electorate voted "yes" yesterday, showing that the potential HDP voters also endorsed the constitutional changes.

Bitlis provides an even clearer example of how a surprisingly large portion of Kurds backed the changes. The HDP had received the most votes in the Nov. 1, 2015 elections with 49 percent support. Fifty-nine percent of the same province backed the changes yesterday. It appears evident that Kurds who back stability and are not hostile to the Ankara government have been alienated by the HDP's decision to incite violence in cooperation with the terrorist PKK since 2015.

Another surprising result was Muş's support for the changes, despite the fact that in the last general elections 61.8 percent of the province backed the HDP. Muş, just like Urfa, is home to an electorate that is politically very similar to the rest of the AK Party constituency.

While not considered a HDP stronghold like Hakkari, Siirt, Batman, Mardin, Şırnak or Diyarbakır, Kars too is a province where the party receives significant support, 34 percent in the last elections. In the June 7, 2015 elections, the HDP, which had garnered significant support due to concerns that it would not be passing the 10 percent threshold, received 43 percent backing in Kars. Its support for the PKK hurt it significantly with a nine percent drop in Kars. Still, Kars, unlike many neighboring provinces, voted "yes" for the reforms.

Despite the solid support it has come to depend on in many provinces in the east and southeast, the HDP should note with worry that the "no" vote in several of its strongholds was just above 50 percent. While, it is no surprise that the party was able to achieve levels above 60 percent in Diyarbakır, Hakkari, Batman and Şırnak, its clear loss of influence in most of the provinces in the region should be an obvious warning signal and that it should no longer take the Kurdish vote for granted.

Meryem İlayda Atlas is Editorial Coordinator of Daily Sabah. She is board member of TRT, the national public broadcaster of Turkey. Atlas also serves as a visiting scholar at Çanakkale Onsekiz Mart University.
Last Update: Apr 17, 2017 1:50 am
RELATED TOPICS