The Sunday vote: A victory or a defeat for AK Party? 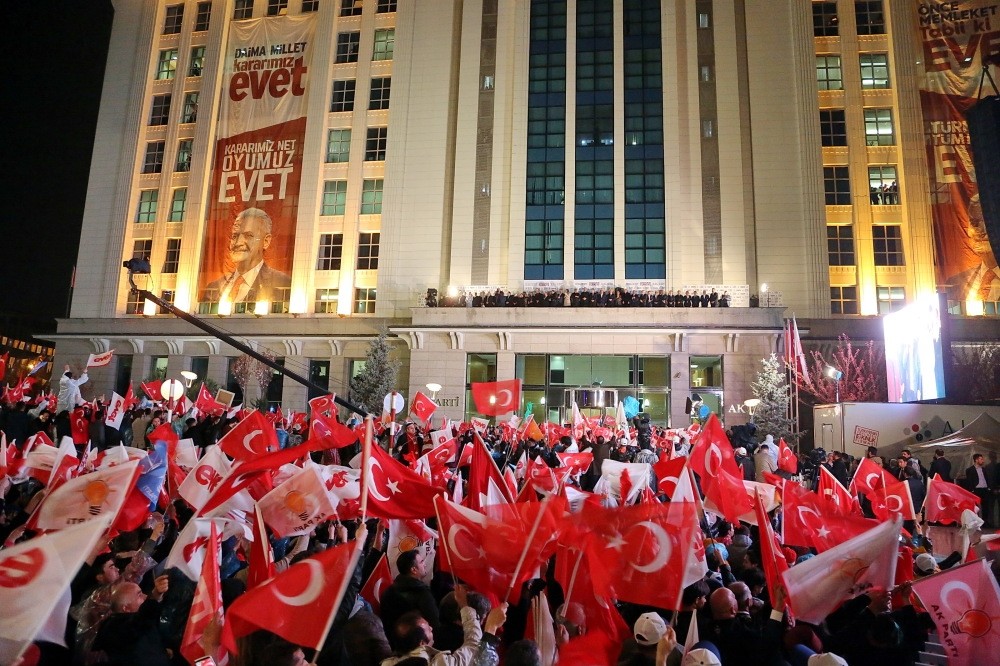 The referendum of April 16 requires much more than just a cursory glimpse at the level of those who were for and against the constitutional changes to pave the way for a presidential system.

A crude breakdown of the results by splitting them according to educational or urbanization levels, as some "no" supporters have done, with the argument that big industrialized cities and educated people with western lifestyles voted against, while people from rural areas with poor educational background voted for reforms, is overly simplistic as it is biased. Such analyses fail to take into account the fact that the ruling Justice and Development Party (AK Party) won every single election and referendum held in the past 15 years and are grounded in a stereotypical condescending attitude directed at the millions and millions of AK Party supporters since day one.

This supposedly elitist mentality narrow-mindedly sees large cities as populated solely by an educated and conscious electorate, ignoring the complicated socio-economic dynamics in many urban centers across the country and huge differences that can be seen among them. Commentators who study the results by labeling groups of people into educated and uneducated, accusing those with a pro-government stance as an easily manipulated demography, hardly qualifies as a legitimate analysis. Still, such drivel is usually what has qualified as analysis in Turkey over the past decade or more.

Any analysis that tries to proffer an objective evaluation of the referendum without any prejudice against the AK Party can easily see that the ruling party failed to persuade a portion of its electorate. It is also true that some urban voters the AK Party saw as its natural supporters did not vote for the reforms. Why? Blaming the educated/uneducated divide is the easy way out, but we need a deeper examination of the results to uncover the real reasons behind this shift.

When one takes a look at the political alliance between the AK Party, the Nationalist Movement Party (MHP) and the Great Union Party (BBP) backing reforms and their potential electorate as of the Nov. 1, 2015 general elections, many expected it to receive around 60 percent of the national vote rather than the little over 51 percent it eventually got.

The most striking conclusion is that the MHP leadership's backing failed to translate into support from the party grassroots. In one MHP stronghold, the province of Osmaniye, the hometown of the party's chairman Devlet Bahçeli, 57 percent of voters supported the constitutional changes. However, in the Nov. 1, 2015 elections, parties supporting the changes received 81 percent of the votes. While it is true that the MHP's lack of intra-party discipline is one of the reasons behind the results, it should also be noted that the full national potential of the party is around 12 percent and consequently should not be described as the sole cause of the outcome.

Turkey, with an incredibly complex demographic structure, is known to swing from one side to another from one election to next. The three largest cities, Ankara, Istanbul and İzmir, voted "no," as did other metropolitan cities like Eskişehir, Antalya, Muğla, Diyarbakır, Adana, Mersin and Denizli. Still, results coming from these cities fail to provide a clear picture on the extent of the loss of support for the AK Party. Each city has its own story. While many of these metropolitan centers voted for the AK Party in local and general elections, some have their own clear political and cultural leanings. Adana is seen as a MHP stronghold, while Diyarbakır usually votes for pro-Kurdish parties.

Muğla and Eskişehir usually vote for the opposition Republican People's Party (CHP).Rather than simply looking at the "yes"/"no" divide, we need to assess the degree to which "yes" votes in provinces and cities dropped compared to the Nov. 1, 2015 elections.Let's have a look at Kocaeli, a very industrialized urban center on the northwestern edge of Anatolia. While support for "yes" was 56 percent, the result reflected a drop of 12 percent compared to the Nov. 1, 2015 elections, which in turn should be seen as an expression of the political preferences of local AK Party supporters.

The "yes" vote in Bursa, another industrial city in the northwest, reached 72 percent. However, this result actually was a 13 percent dip compared to the AK Party-MHP-BBP bloc's potential as seen on Nov. 1, 2015. Some 72 percent of Konya, a conservative industrial city in the center of Anatolia, voted for the reforms, but it meant a significant drop compared to the huge 86 percent support the parties received last time. One qualification here may be the failure of former Prime Minister Ahmet Davutoğlu to actively join the "yes" campaign, creating confusion among his hometown electorate.

In Istanbul, Bayrampaşa, Beykoz, Gaziosmanpaşa, Güngören, Tuzla and Fatih municipalities voted "yes," but to a lesser degree than in past elections.

As votes across the nation indicate, the parties for reform lost support even in places where the "yes" vote dominated. Rather than generalized conclusions, we need a region-focused assessment of the result that accounts for particular cultural, economic and social variances among cities, municipalities and even smaller centers. The "yes" camp won the referendum but compared to past elections, lost votes in urban and rural centers. However, when one looks at the current political structure in Turkey and developments within and abroad, it is a grave mistake to see this as a loss of support for the AK Party.

Meryem İlayda Atlas is Editorial Coordinator of Daily Sabah. She is board member of TRT, the national public broadcaster of Turkey. Atlas also serves as a visiting scholar at Çanakkale Onsekiz Mart University.
Last Update: Apr 22, 2017 2:00 am
RELATED TOPICS