Who is the champion of the pious in Turkey? 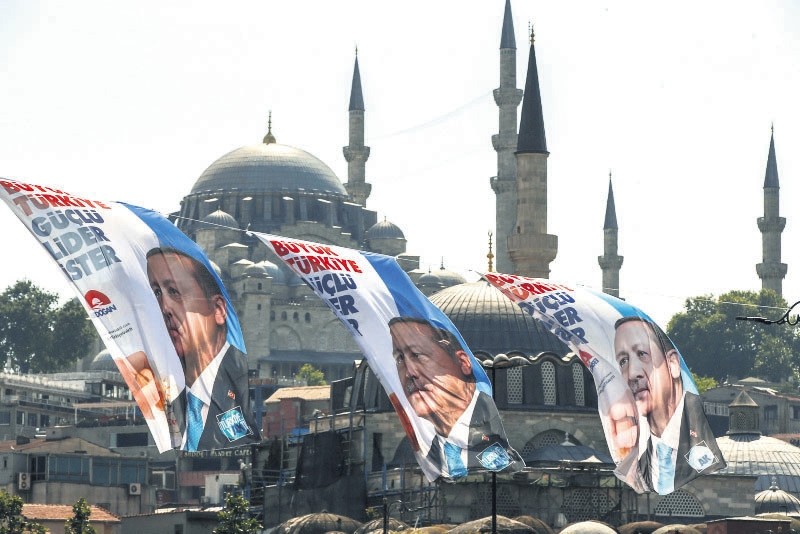 For years, Western media added the qualifier "Islamist" in front of President Recep Tayyip Erdoğan's Justice and Development Party (AK Party) when reporting on Turkey. In Turkey, Islamism, as an intellectual movement, is not contextually linked to violence, unlike in the West. Moreover, the AK Party never described itself as an Islamist party.

Still, Western media has spent the last decade trying to portray the AK Party as a movement that was gradually transforming into an organization with an Islamist agenda like Hamas. They preferred to view the Turkish public's simple acts of worship and public displays of religious devotion as an enormous menace pushing the country away from secularism, toward the Islamization of Turkey and the end of state laicism.

It took opposition presidential candidates Muharrem İnce and Meral Akşener's public expression of religious devotion to attract support from conservatives for many in the Western media to finally realize that Turkey is a Muslim-majority country.

İnce talks about his regular attendance of Friday prayers, namaz and his umrah. Akşener holds a scarf in her hand at every campaign rally, making symbolic statements that emphasize her religious devotion. However, such behavior is not at all abnormal as Turkey is a Muslim-majority country.

What was abnormal was the artificial secularist boundaries imposed on Turkey's political discourse that forced the majority to hide their religious beliefs to begin with. For decades, politicians who performed their religious absolutions were portrayed as zealots exploiting religion.

The culture of piety has a public presence. Being uncomfortable with open displays of religious belief does not make sense. If you are addressing a public gathering with a microphone in hand, it is only common decency to stop talking when you hear the call to prayer. No one in Turkey would criticize you for it. So, when Akşener does exactly that, no one with a clear understanding of the Turkish public would argue that she would in turn attract conservative votes and lose the secular electorate.

I believe Western academia needs to address the West's failure to grasp Turkey and its people. This problem is becoming chronic.

A few weeks ago, a German journalist wanted to have a chat. We had an interview. I believe I did my duty as the host, had a good conversation and then we parted ways. Later, when filing her report, she described me as a person who secluded herself in her room from an open office full of women who wore tights and tight jeans. She said I wore a thick jacket in 25-degree heat. If you ask me, Western journalists seem to be pleased in deluding themselves, living in a world of their own construction.

The fact is that my office is on the north-facing side of the building and receives little or no light and as a result is usually colder than the open office, forcing me to wear a thick jacket and has nothing to do with my veil or hijab. It was just that simple. The explanation for my seclusion from the open office is as equally boring. I am an executive and as a result was given an office. This is a nearly universal rule, in many societies. Just a normal hierarchical office seating arrangement. What is interesting is the failure to take these facts into account while describing a woman wearing a headscarf.

There are thousands of ways to describe a woman to readers. You can say, "a nicely dressed woman with a headscarf," which would be my personal choice if I had a say. However, the thought process of Westerners seems to be tuned to make this Freudian slip, especially concerning such interactions between West-East axes.

Public displays of religious devotion by politicians more or less suffer the same understanding in the West. Without penetrating the surface, they frowned upon what they did not fully understand – that is until yesterday, when suddenly it all seemed genuinely charming performed by İnce or Akşener, who in turn hoped it would attract conservative votes and defeat Erdoğan. Their only hope seems to be instigating a split in Erdoğan's conservative votes. Akşener's vocal anti-Kurdish remarks and the human rights violations committed under her stewardship of the Interior Ministry in the 1990s have been conveniently ignored. Her appointed mission seems to be drawing away right-wing votes from the AK Party's People's Alliance with the Nationalist Movement Party (MHP).

İnce, meanwhile, is seen as capable of attracting religious voters. He regularly prays and calls for headscarf liberty, making him a first-rate champion on religious freedom. The only chink in his armor is his decade-long support for the headscarf ban, followed by his repeated efforts to get it reinstated through his applications to the Constitutional Court. He is also the candidate of the Republican People's Party (CHP), the same party that made Kemal Alemdaroğlu and Nur Serter, two arch-secularists who have come to symbolize the ban that disenfranchised millions of women, parliamentarians. For the pious in Turkey, if the CHP stands for one thing, that is the ban on headscarves. İnce arriving at a campaign rally with his headscarf-wearing sister is not enough to wash away that dark stain on the party's entire mentality.

At the end of the day, it appears the same people who tried to marginalize Erdoğan by describing him as an Islamist have come to accept the fact that Turkey is a Muslim-majority country and it is natural for its people to behave accordingly as they praise İnce for attending Friday prayers and Akşener going to Hajj.

Weren't the growing displays of public piety in Turkey an issue of major concern among Western literati, while the Turkish public, electorate and taxpayers were at ease?

The answer is simple. Narrow-minded policies shaped by hatred focused on toppling Erdoğan and seeing religiosity as a temporary aberration that can be taken care of later.

Meanwhile those who have a full grasp on reality see Turkey making significant progress on resolving its identity issues. The opposition, sincerely or not, seems to have finally understood that every election campaign needs to take the religious majority in Turkey into account. I believe this change, which might seem artificial now, is just the start of a more transformative and lasting process and should be viewed as a positive development. The cold-blooded Westernism displayed by a minority despite the wider society can no longer dominate Turkish politics. This, at the very least, is a welcome coming-of-age development for Turkish democracy. Meanwhile, myopic Western journalists can only see the possibility of a split among Erdoğan votes. Such mental blindness and intellectual lethargy will lead to disappointment, which for Western journalists deluded by their prejudices is a deserving punishment. We, meanwhile, have no such time to waste.