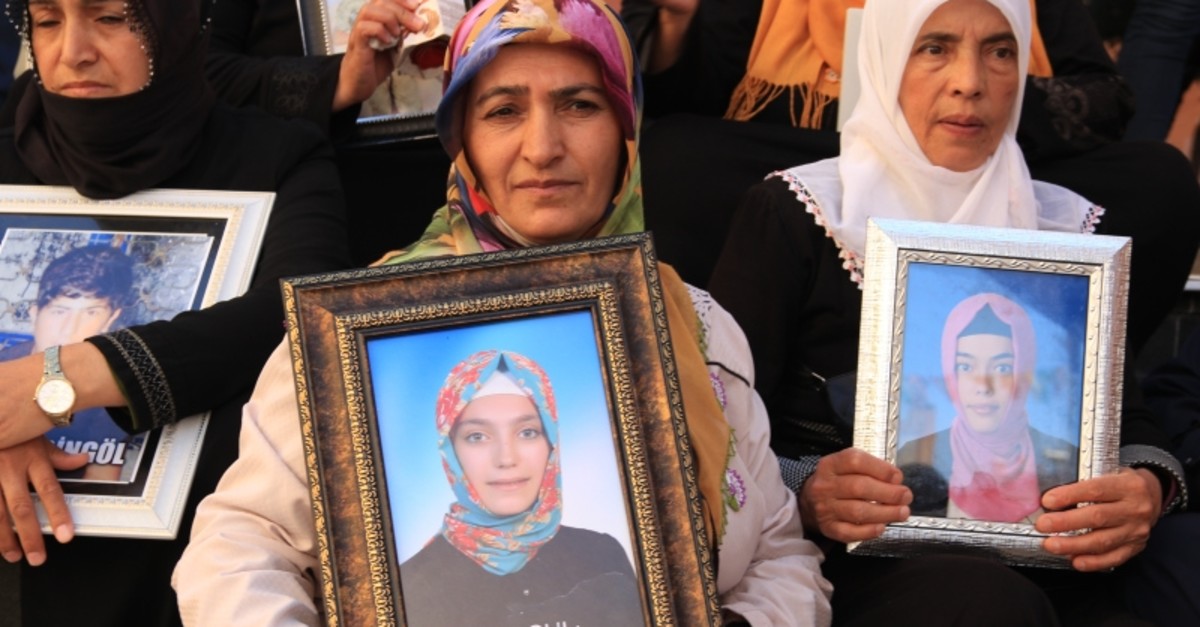 The Kurdish mothers' protest outside the pro-PKK Peoples' Democratic Party (HDP) provincial office in southeastern Diyarbakır province entered its 56th day today since starting on Sept. 3. The number of sit-in protesters increased as new families joined in support of the others, a reaction against the outlawed PKK, who abducted and recruited their children and the HDP, which despite being a political party, families see no difference from it and the terrorist group.
Fatma Akkuş, mother of Songül, who was kidnapped to be recruited by the PKK, told the press that she would not leave the protest until her daughter returned home.
She said she missed her daughter very much and added that the “HDP cheated and took our children here, then, they send them to the rural areas and mountains. My daughter disappeared five years ago and I have never seen her since.”
Fatma Akkuş further claimed that the HDP is taking their children but they don’t send their own children to the mountains. “If they want to send children to the mountains, why they don’t send their own children?” she asked. “This is not a Kurdish or Turkish issue. If they are fighting for Kurdish rights, why did they take my child from me? I have started this protest to demand my daughter's return, and we will continue until I die here,” she said.
Bilal Avunan, who joined the sit-in for his kidnapped son, blamed the HDP for his loss. He told the press that he searched for his son four months after he was kidnapped in 2015 and then he went to Ankara to meet with HDP deputy İdris Baluken. Baluken got a phone call with HDP and said “your son was taken by the HDP and sent to the PKK.” He never met with his son after he disappeared. He said, “I don’t know if he is dead or alive; my son, give us a voice, if you have a chance please escape, come to us. The PKK and HDP are the same thing to me.”
Among the protesters, 82-year-old Hurinaz Omay, waiting for her son Rıfat, who was abducted by the PKK 24 years ago, relayed the most heart-wrenching story. Her son disappeared in Bitlis province 24 years ago, she went to Qandil and Mahmur, the headquarters of the PKK, twice in the hope of finding him, and has never given up her search. And now, she wants to find him no matter if he is dead or alive. Omay says in all candor that the HDP does not represent the Kurdish people but deceives Kurdish children into joining the PKK, clearly expressing her revulsion.
The sit-in has continued since Sept. 3, with 55 families currently protesting, including five Iranian families whose children were abducted by the PKK's Iranian wing, the Kurdistan Free Life Party (PJAK). The protest started when Hacire Akar’s turned up at the doorstep of the HDP's Diyarbakır office one night. A week later, on Sept. 3, 2019, the movement of the families inspired by Akar turned into a collective sit-in protest. Akar’s son Mehmet returned home on Aug. 24, showing people that there is still hope. Following Hacire Akar, Fevziye Çetinkaya, Remziye Akkoyun and Ayşegül Biçer also turned up at the HDP office and demanded the return of their children. Their resilience and resistance set an example to other mothers.

Meryem İlayda Atlas is Editorial Coordinator of Daily Sabah. She is board member of TRT, the national public broadcaster of Turkey. Atlas also serves as a visiting scholar at Çanakkale Onsekiz Mart University.
Last Update: Dec 20, 2019 1:16 am
RELATED TOPICS