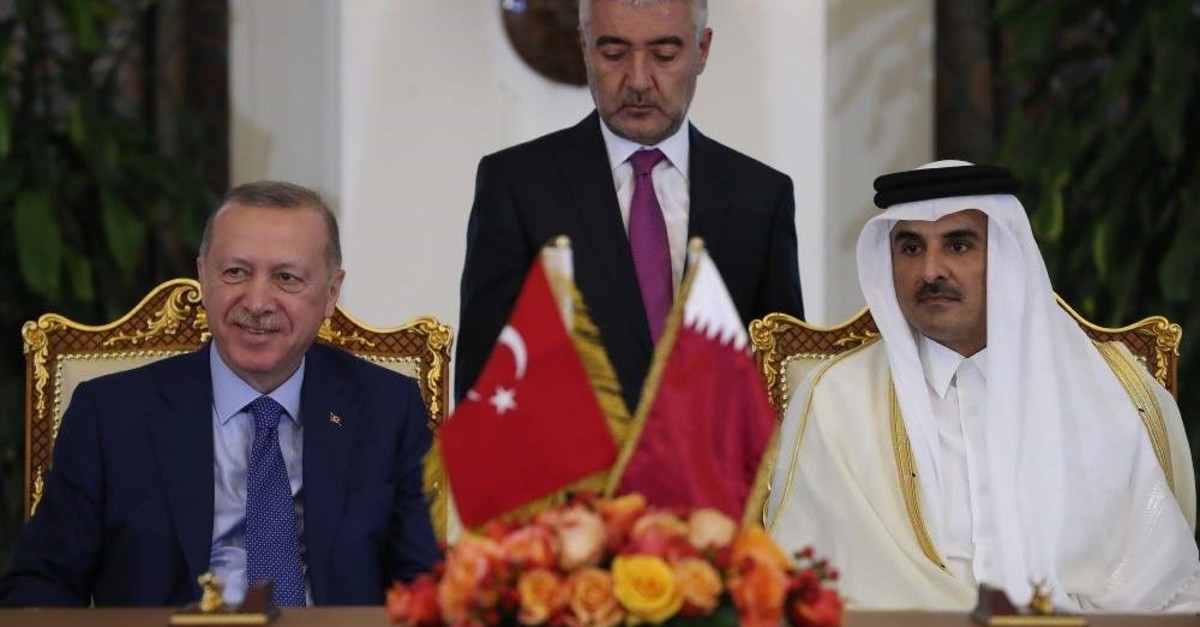 Ankara and Doha have pledged to further improve their ties on the sidelines of the visit by President Erdoğan, who stressed that defense cooperation is the backbone of the Turkey-Qatar relationship

Friends in good times and bad, Turkey and Qatar yesterday agreed to further boost their bilateral relations as they signed seven new agreements in several areas, including trade, industry and technology, while also strongly emphasizing military and defense cooperation.

The deals came on the sidelines of President Recep Tayyip Erdoğan’s one-day visit to Doha where he arrived yesterday at the invitation of Qatari Emir Sheikh Tamim bin Hamad Al Thani to attend the fifth meeting of the Qatar-Turkey Higher Strategic Committee.

During their meeting, the two leaders discussed all aspects of the relations between Turkey and Qatar, addressed the means to further deepen the cooperation between the two countries in all areas and exchanged views on regional and international issues.

Following the one-on-one meeting between Erdoğan and Al Thani, an agreement signing ceremony was held after an inter-delegation working meal. Seven agreements were inked with the attendance of the two leaders.

“We have held productive, successful and sincere meetings,” Erdoğan said, as he addressed Turkish troops during his visit to the Qatari-Turkish Combined Joint Task Force Command.

The president stressed that the agreements they signed will enable them to further clinch the already strong strategic partnership with Qatar.

The close regional allies have developed their relations rapidly in various fields, particularly over the past few years. The strategic relationship at the economic, political and military levels and the intense bilateral visits at all levels have added a major impetus to the relations.

Ankara emerged as one of Qatar's top partners since a Saudi Arabia-led bloc launched a trade and diplomatic boycott of the tiny Gulf state in 2017, providing increased support to Qatar, boosting food and other exports to shore up Qatar's needs just after it began.

Fraternal ties between the two allies also gained significant momentum after the failed coup attempt in the summer of 2016, during which Qatar showed strong support.

In June 2017, a handful of Arab states, led by Saudi Arabia, abruptly severed diplomatic relations with Qatar and imposed a blockade on the tiny Gulf country, accusing it of supporting terrorism. The Qatari government denied the accusation, blasting the blockade as unjustified and a violation of international law. During the rift, Turkey provided increased support to Qatar, boosting food and other exports to meet any shortages. Trade between the two countries saw a significant rise in the said period, while the two countries also agreed on various projects for the coming period.

The volume of bilateral trade between Turkey and Qatar has increased by 84% over the last decade, last year totaling $1.3 billion, according to data from the Turkish Statistical Institute (TurkStat). In the first nine months of this year, Turkish exports were recorded at $838 million, while imports from the Gulf nation came to $205 million.

During his visit to the Turkish capital in August last year, Qatar's Emir Sheikh Tamim bin Hamad Al Thani announced that his country would make a direct investment of $15 billion to Turkey.

The ongoing crisis in the Gulf region will hopefully be resolved soon, Erdoğan stressed, addressing the Turkish troops yesterday.

“Since the crisis started in 2017, you have been assuring the safety and security of our Qatari brothers. With your position and your stance, you have gained the love of the Qatari people,” Erdoğan said.

He stressed that military, security and defense cooperation are the backbones of the Turkey-Qatar relationship and that Qatar’s security is inseparable from Turkey’s security.

“We have deep relations with the Gulf region. The peace, security and stability of the region is very significant for us,” he added.

He also criticized those that he said had demanded the closure of this base, stressing that they have not yet understood that Turkey is a friend of Qatar in hard times.

“Nobody should be offended by the presence of our country here,” he said. The Turkey-Qatar Combined Joint Force Command facilitates stability and peace in not only Qatar but also the Gulf region, Erdoğan said.

He also announced that the construction of a new military post in Qatar is completed and will be named Khalid bin Walid, after the famous Muslim commander.

The two countries inked a defense agreement in 2014, allowing for joint training exercises, cooperation on defense manufacturing and the deployment of Turkish forces on Qatari territory. Under the deal, Turkey established a base in Qatar at Doha’s request.

The first batch of Turkish troops arrived in capital Doha in October 2015, and the Turkish flag was hoisted at the military base four days later.

The joint statement of the fifth meeting of the Turkey-Qatar High Strategic Committee between Turkey and Qatar was signed by Turkey’s Foreign Minister Mevlüt Çavuşoğlu and his Qatari counterpart, Mohammed bin Abdulrahman Al Thani.

The agreements in the fields of economy, urbanization, trade, industry, technology and standardization, among others, were signed to boost bilateral relations. Among the Turkish officials that were present at the ceremony to ink the agreements, along with their Qatari counterparts, were central bank Governor Murat Uysal, Environment and Urbanization Minister Murat Kurum and Industry and Technology Minister Mustafa Varank.

Meryem İlayda Atlas is Editorial Coordinator of Daily Sabah. She is board member of TRT, the national public broadcaster of Turkey. Atlas also serves as a visiting scholar at Çanakkale Onsekiz Mart University.
Last Update: Dec 20, 2019 1:55 am
RELATED TOPICS